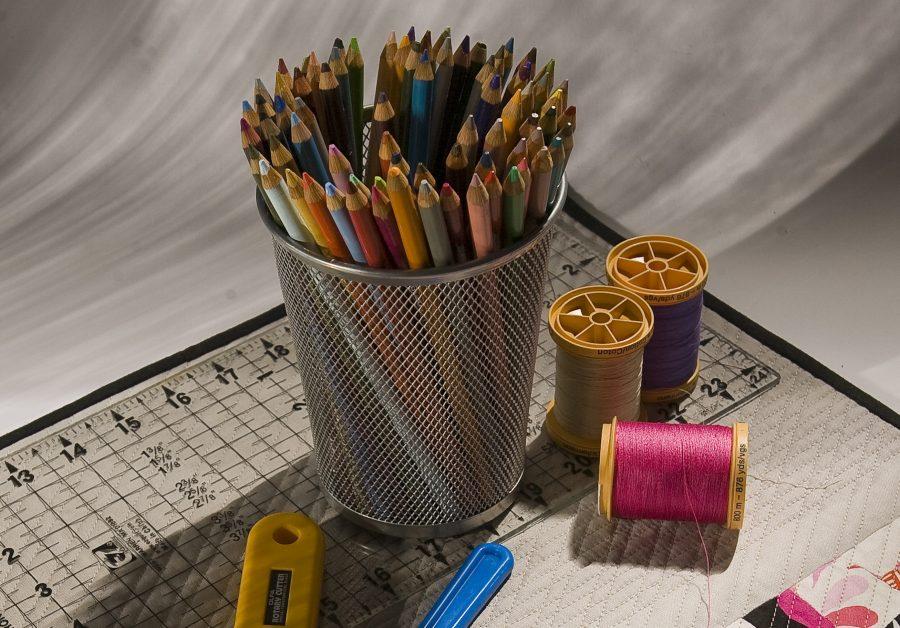 Some tools of the trade of quilting include a rotary cutter, colored pencils for sketching and some spools of thread. (Shane Keyser/Kansas City Star/MCT)

I’m not a natural at drawing. It’s only been two weeks of class, yet I’m sure I won’t be incurring any figurative jealousy. But if I think about it, I’m not a natural writer either. To be a good writer, one must be a good reader, a professor said to me once. But even careful reading takes practice and habituation, patience and recursion. Learned presence. Some of these are more slippery and rare than others, but most can be acquired. Here’s James Baldwin, telling you that very thing: “Talent is insignificant. I know a lot of talented ruins. Beyond talent lie all the usual words: discipline, love, luck, but most of all, endurance.”

So maybe I’m just an early quitter in the studio. Although the more likely picture is of maximum effort running in place, remaining untalented, and becoming a practiced ruin. The strangest aspect of drawing, to me, comes from its ideation process. Or at least the one I can’t conceive: looking at three-dimensions and translating them into two, while maintaining the appearance of three. Perhaps every novice gets caught up in mimesis, and has ceaseless, self-conscious doubts. Though with writing, an appeal to the imagination is enough: picture a square. But drawing cannot appeal or rely on the mind to do all the invisible lifting; it must re-produce and anticipate, in minute detail, the eye. It must beat it.

Whereas I can knead language along a series of graduating steps, even my carefully refined circles look skewed and stretched. Drawing takes the writing process and squashes it into a scary binary: convincing existence or “artist’s rendering,” code (when aimed at me) for “you’re really learning a lot,” or silent oversight. I can’t conceptualize drawing any more than I can Mandarin symbols. The shorthand of visual translation − proportion, angle, shade − still hasn’t not created for me any perfect pictures. I mis-read even those basic tenets in embarrassing ways.

The drawer’s severe discernment seems out of reach, and repetition appears a condescending antidote.”

Great drawing has always had an aura of art ex machina, and the process remains opaque. Degas sketches seem easy and unreal, a few loose lines gently triangulated into beauty. Those same lines, in transit to the finished piece, somehow perplex my sense of the world.

The space intimated between sight and page is bereft of some mysterious instinct, frustrating whatever artistic process I know into paralysis. From a world of words, I’ve come to the silent, stable articulation of figure. The quick arithmetic of shape space-relations makes metaphor, synecdoche or any other linguistic trick seem like an evasion of truth.

My lines accumulate in similarly evasive ways, into embarrassing monsters, often starkly shaded and mis-proportioned, with the angles of a Tim Burton storyboard.

And what’s worse, my imagination feels impotent. The methods I’ve learned to sculpt sentences seem convoluted, tortuous, compared to the Hemingway-esque succinctness of a shape re-created. I’ve never been jealous of Hemingway except now, as I desperately try to find interdisciplinary comfort.

Drawing, at least my rudimentary sort, seems like a kind of math and logic, and similarly, Hemingway’s writing has always felt like Marie Kondo without the joy − simple and Spartan and cleaner than me. The drawer’s severe discernment seems out of reach, and repetition appears a condescending antidote. Maybe I’m just pissed at the rules, but I will always feel impotent, ignorant and overly elaborate when it comes to pencil and page. Even talking about drawing, condensing fluffy, art historical monologues into adjectives, seems pompous and over-complicated. Unable to sustain the healthiest mode of creation, the mind is then forced to resort to the dessert cart of words.

So what do I do? Well, keep trying to sync up my two minds: the hypertrophied linguistic one, and the infant still grasping at the simplest logic. I’m an artistic non-athlete, a producer of nothing. To be frank: I have not been this blatantly bad at something in a long time, in part, because life will gladly shrink toward us, impelled by spells our talents cast. Untalented elsewheres often remain invisible from our tiny vantage. But drawing has invaded my Eden, made paradise lost. As Milton says of Adam and Eve, recently banished from bliss: “the world was all before them…” and, if I can add my spin, it was propped up on an easel.