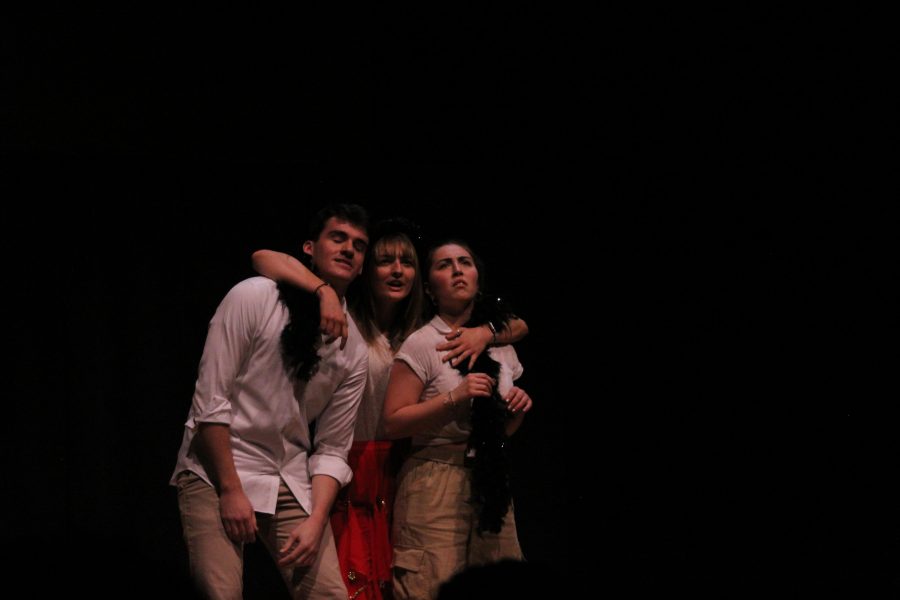 Causing the audience in Brendle Recital Hall to erupt with laughter over and over again, the Lilting Banshees hosted their first show of the semester, “Lilting Banshees: Classics,” on Jan. 24. As the title suggests, the comedy troupe performed revamped versions of sketches from the past 15 years.

Senior Alec Gannon, the director of Banshees, said the decision to showcase past material was inspired by a 25-year reunion hosted by the troupe in 2019.

“That weekend, the former Banshees performed a few of the sketches that we featured in this past show,” Gannon said.

“I think our troupe really looked up to those alumni, and we were pleasantly surprised to discover that their sense of humor isn’t so different from ours — Banshees will be Banshees. We loved their jokes, and we wanted to pay homage to the Banshees that made the troupe what it is today,” Gannon said.

The show, which sold out in hours, was comprised of 14 sketches written by alumni. Normally, the current members write the sketches themselves — bouncing ideas off of each other until they are satisfied with the final product. Senior Grace Franzese said that performing the old sketches was completely different than taking the stage with material they wrote themselves.

“Doing our own stuff, and having it be on stage for the very first time, is way more personal. I think most of us feel way more attached to it. But it was exciting going through the sketches of Banshees past and putting together a show with it,” Franzese said.

“It was interesting because there was that expectation to perform it how it was performed back then, but once you got comfortable with your character you kind of played around with it and made it your own,” she said.

Gannon explained that the rehearsal process for the Classics show did not differ much from their usual approach.

“It still took memorizing lines, practicing blocking, gathering props. However, what made this show easier, is that for some sketches, we could go back and ‘watch the film’ if we needed to,” Gannon said. “I think we took old sketches and wanted to slap this current troupe’s stamp on it. But at the end of the day, we were standing on the shoulders of some really funny people.”

Riffing on a presidential debate, the first performance of the night was also one of the most recently written. Featuring two sorority girls competing to be the newest Sigma Alpha Epsilon little sister, the sketch was from Franzese’s first year in Banshees.

“All of the original actors from that sketch were people who were in the troupe with me my freshman year,” Franzese said. “Apparently the original version was nothing like it, and they overhauled the whole thing the night before they voted on the show for that semester.”

Some of the oldest sketches of the night elicited the best responses from the crowd. A play on Beauty and the Beast, the Banshees performed a musical titled “Biddie (Sophomore Alexandra Karlinchak) and the GDI (Freshman Tommy Murphy)” that was almost 10 years old. With characters like “Fratston” (Senior Cooper Blaze) and university-niche jokes about being unaffiliated, it felt like the sketch could have been written days before the show.

Also a decade old, “Dean Shore (Junior Joey Smuckler) v. Sheen Dore (Blaze)” was another example of the common sense of humor that Gannon described earlier. Lovingly parodying the university’s barber, knowing that the sketch was written years ago emphasized the sense of nostalgia that ran throughout the production.

When asked about their favorite moment of the night, Gannon, Franzese and Trabanino all had the same answer: the ending of the sketch “Wanna See My Secret Box.” Originally written in 2005, a student (Sophomore John Paul Jeanes) accuses his roommate (Sophomore William Bradford) of looking through his secret box and proceeds to share a letter he wrote of having a crush on him. The roommate admits that the feeling is mutual, and they ended up improvising a kiss right before the auditorium went black.

“None of us knew the end of that sketch was coming, and backstage we were all having the same feeling as the audience: ‘Oh my god are they gonna kiss?’ Obviously I’ve read the script and seen the whole show rehearsed a bunch of times, so usually the only thing new to me by show night is how the audience reacts to it,” Franzese said. “It was fun to have something on stage, in front of a whole crowd, that surprised even me.”

Although he was hesitant to name his favorite sketch, Gannon ultimately shared a similar sentiment to Franzese about the excitement surrounding the brazen kiss.

“To hear everyone in Brendle cheer like crazy for those kids would make any director proud,” Gannon said. “I love this troupe, and every kid in it.”