McGregor Puts On A Quick Show At UFC 246 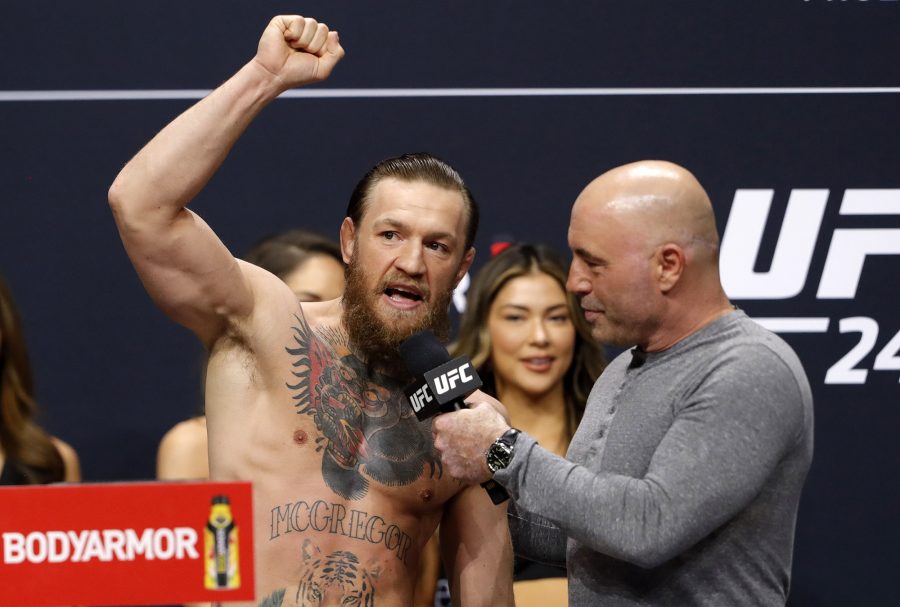 Welterweight fighter Conor McGregor is interviewed by UFC's Joe Rogan during a ceremonial weigh-in for UFC 246 at Park Theater at Park MGM on January 17, 2020, in Las Vegas. McGregor will face Donald Cerrone on January 18 in Las Vegas. (Steve Marcus/Getty Images/TNS)

At UFC (Ultimate Fighting Championship) 246, it took the Irishman, Conor McGregor, only 40 seconds to knock out the Cowboy, Donald Cerrone. The fight took place at the T-Mobile Arena in Las Vegas in front of a jam-packed crowd. Notable attendees include Chris Pratt, Matt Damon, Megan Fox and Tom Brady, among others. It seemed as though McGregor had the upper hand even before the fight began. The Irishman radiated confidence as he strutted into the octagon under the green and orange lights to the roaring of the crowd and “Hypnotize” by The Notorious B.I.G.

The fight was McGregor’s first since his loss in the title fight to Khabib in UFC 229, which took place back in October 2018. The bout, which was the main event on Jan. 18, was an important one for McGregor. He was coming off of successive losses, one to Khabib and the other from a technical knockout at the hands of boxer Floyd Mayweather Jr., who was 49-0 coming into that fight. McGregor, who is an MMA fighter by training, lost in the tenth round of the bout in his professional boxing debut.

McGregor ended his losing streak in epic fashion, with an incredibly impressive showing against one of the most experienced and qualified fighters in the UFC. From the second the opening round began, McGregor took the offensive. He charged toward the Cowboy and threw a punch towards his head. Cerrone ducked and dodged the punch, but McGregor immediately followed through with a knee that landed right on his nose.

The blow left Cerrone visually stunned, and McGregor quickly followed it up with a blow to the face from his razor-sharp shoulder blade. McGregor used his shoulders effectively by changing his elevation and before Cerrone realized what was going on, McGregor landed several more blows, one of which seemed to break Cerrone’s nose. After a roundhouse kick to the face and a few punches, Cerrone fell to the floor and within seconds the fight was called as a KO.

Not all in the world of UFC were captivated with McGregor’s quick work. Nate Diaz, who attended the fight at T-Mobile Arena in Las Vegas, let it be known that he was not impressed.

“Cowboy doesn’t care about winning and losing, so (McGregor) didn’t have a very hard fight on his hands,” said Diaz per ESPN’s Marc Raimondi as quoted in BJPenn.com, a mixed martial arts news website.

With the Irish flag draped around his shoulders, McGregor talked with Joe Rogan after the fight. McGregor, when asked about what was next, told Rogan that he intended to stay within the welterweight division but did not name anyone in particular he wanted to fight next. UFC president Dana White mentioned the prospect of a possible rematch between McGregor and Khabib Nurmagomedov, which would be tremendously lucrative for the sport, especially considering the circumstances which surrounded the end of the last fight between the two men. After that fight, back in 2018, Khabib fought some of McGregor’s entourage after getting word of comments that McGregor made about his Muslim faith. It is also possible that McGregor could return to the boxing ring. Hours after the fight with Cerrone, Floyd Mayweather posted a photo on his Instagram of himself alongside McGregor with the caption “Mayweather-McGregor 2, 2020.”

Whatever McGregor’s next move is, it is sure to be entertaining. No matter where the Irishmen goes, the eyes of the MMA world are sure to follow.