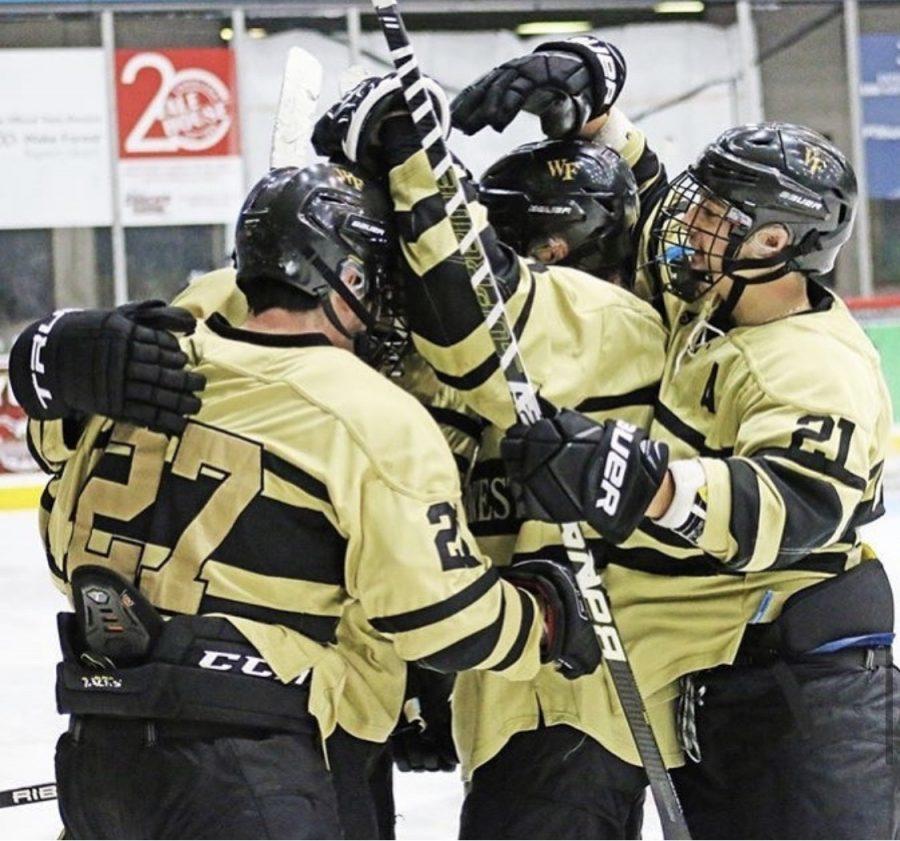 One week after winning their division and clinching a spot in the ACCHL playoffs, the Wake Forest Men’s Club Hockey team continued their strong run with a close 5-4 win against Virginia Tech and a dominating 4-1 win over Duke.

The two wins bring the Deacs’ record to 11-3, with two games remaining before the playoffs.

“We got some kids back who were studying abroad, which is helping us with balance,” said Wake Forest Head Coach Dave Pasquale. “So we’ve been able to run four lines which helps as we get into the third period. We’re starting to wear some teams down.”

Wake Forest ’s first game of the weekend, the 5-4 victory against Virginia Tech, was a nail-biter until the very end. Virginia Tech opened up the scoring in the first four minutes of the game, but Wake Forest’s sophomoreJennings Lobel answered back two minutes later with a hard shot from distance that sailed into the net to even the score at one. Lobel was assisted by senior captain Blake Mueller and freshman Michael Kenney.

Wake Forest took its first lead of the game with a little under five minutes remaining in the second period. Lobel scored his second goal of the night off of a rebound in front of the net. He deftly flicked the puck past the goalie to make it a 3-2 game.

The back-and-forth continued when Virginia Tech scored 41 seconds later to even the game up at three-all heading into the third and final period.

Wake Forest retook the lead with 18:14 remaining in the game with a goal by senior Jack McGowan. The Deacs recovered a rebound and passed to McGowan, who hit a hard slap shot from distance. The game was tied back up again with a little over 10 minutes left when Virginia Tech scored on a fast break.

With the game tied at four with under 10 minutes left, sophomore superstar Drew Gebhardt broke the stalemate to give Wake Forest the 5-4 lead and eventual victory. Gebhardt, who made the ACCHL All-Star team as a freshman, raced down the ice and received a pass from sophomore Nick Keroack before hitting a blazing shot into the net.

“Keroack made a great chip giving me a chance to chase down the puck and fortunately it snuck by the goalie,” Gebhardt said.

The Wake Forest defense clamped down in the waning minutes of the game and preserved the 5-4 lead as time expired.

“We finally started shooting pucks on net. The goalie gave out a lot of rebounds so the key was to get it into the zone and get pucks on net,” said coach Pasquale said

Wake Forest beat Duke 4-1 in the second match of the weekend, but the final score was not nearly as close as the match appeared to be. The Deacs had a 67-11 advantage in shots on goal and Duke did not have enough players to field two full lines.

The Duke goalie shut out the Deacs for nearly the entire first period. But just as it looked like the first period would end scoreless, sophomore sensation Brendan Gregoire scored to make it a 1-0 game. Gregoire, who has 13 goals on the season, deftly shot the puck over the goalie’s left shoulder and into the net.

“[Freshman] Ryan Siffringer did a great job winning the face-off and [senior] Solviletti made a great pass on the break out to me and I was lucky enough to be able to slide it over the goalies shoulder,” Gregoire said.

Wake Forest scored again midway through the second period to take a 2-1 lead. Sophomore Will Caulkins scored his first career goal on a hard shot that went past the goalie.

Duke’s only score of the game came with a little over a minute left in the second period off of a power play.

Wake Forest’s final two scored came within 16 seconds of each other in the third period. After a Duke penalty gave Wake Forest a power play, senior Eric Khalouf scored off a rebound to put the Deacs up 3-1. Soon after the next face-off, Keroack scored to give Wake Forest the 4-1 victory.

Wake Forest’s next game is on Feb. 1 on the road against Duke.