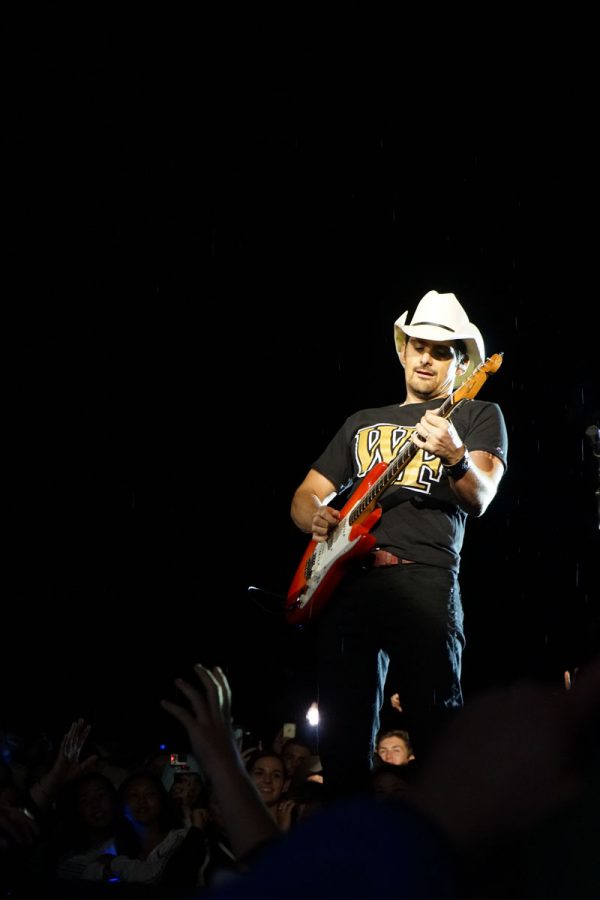 The concert was a part of the Country Nation College Tour, a series of concerts that has taken Paisley to many colleges throughout the South. Sponsored by the Wake Forest Athletic Department, students were allowed free admission, with many faculty, staff and members of the local community also in attendance.

The show was introduced by members of the Athletic Department and featured performances by the cheerleading squad and dance team. The Demon Deacon mascot also made multiple appearances, one of which included an air-guitar jam session with Paisley himself.

After a weak round of the alma mater (let’s be honest — no one knew the words), Eric Paslay took the stage. Accompanied only by his acoustic guitar, Paslay performed several of his most famous hits including “Song About A Girl” and “She Don’t Love You.” Though lacking a full band, Paslay did not need the extra instrumentals to keep the audience absorbed and enthusiastic the whole time. As a matter of fact, the acoustic covers provided a nice contrast to the eardrum-pounding bass and electric guitar that ensued once Paisley took the stage.

Paisley, for his part, did a great job, as well. Wearing a Wake Forest T-shirt, his iconic cowboy hat and carrying an electric guitar appropriately decorated in paisley designs, he was greeted by tremendous applause as he walked on stage and started the show with his most recent hit, “Crushin’ It.” He was accompanied by a full band (alas, no Nathan O. Hatch on the drums), a music video for each song projected on an enormous screen behind him and a mascot wearing a caricature of Paisley’s head that leapt around the stage from time to time.

Highlights of his performance included a Face Time call with Carrie Underwood (clearly fake, though. No one looks that good on Face Time — not even you, Carrie), several audience-wide selfies taken by Paisley and an encore performance of two songs at the end.

To describe the performance in one word, I would simply say “fun.” No, neither the lyrics nor the rhythms were particularly innovative, but then again, they didn’t need to be.

I knew what I was signing up for when I got tickets to a Brad Paisley concert: songs about fishing, Friday night and friends, to name a few topics. I expected to sing along to simple, catchy tunes, and that’s exactly what I did.

The music videos and the mascot weren’t necessary, and I actually think the videos detracted from the music.

The occasional flashing signs on the jumbo screens with promises such as “FREE BEER TOMORROW” or eloquent phrases such as “BEER, BEER, BEER,” also did nothing for the music.

However, there’s no denying that these details weren’t attention-grabbing and entertaining.

The flashing signs about beer, for example, were met by great applause, and the music videos had funny moments in them.

Ultimately, people were there to have a good time, and that’s just what Paisley’s performance offered.