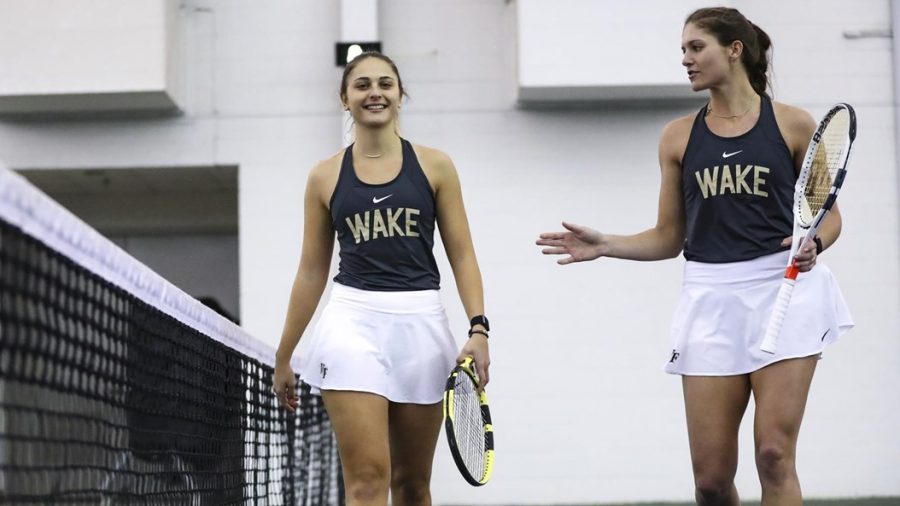 The Wake Forest Women’s Tennis team has joined the ranks of the national championship-winning men’s team with their spot in the top 25 nationally to start the season. The team is coming off of four straight seasons with appearances at the NCAA tournament are looking to continue that dominance on the court this season.

The Demon Deacons are red-hot to start the year, currently sitting at 5-1 with momentum on their side after winning three straight matches. The sole loss for the team came in their first match of the ITA Opening Kickoff Weekend against No. 25 Ohio State. On Friday, they gained a huge non-conference victory over the reigning Big 12 Champion Kansas. In Williamsburg, Va. on Sunday, the Deacons grabbed a decisive victory against William & Mary. The team has only dropped one match in the last three dual matches and have won all three after just the third singles match.

“It was a good performance from us today,” said Head Coach Jeff Wyshner after the win against William & Mary on Sunday. “Doubles got us going well. I always worry a little after a big win like we had on Friday. The team did a great job of showing up ready to go. We get to catch our breath for a week and then have a big ACC opener on the road at Clemson.”

Wyshner enters his ninth season at the helm of the team this year. The Deacs’ stellar 2015-16 campaign earned Wyshner ITA Carolina Region Coach of the Year honors. The 2016 campaign was a turning point for Wyshner and the Deacons, establishing their dominance for years to come. The Deacs’ first-ever 9-0 start propelled the team to a 19-10 overall record and a 7-7 mark in the ACC. It was the most wins since 2002, a seventh-place ACC finish and a No. 29 final national ranking — their best since 2007.

The team made the NCAA Tournament for the first time since 2009, after getting up to No. 14 in the national rankings during the regular season. Since that season, the Deacons have made the tournament every year and look to continue that this season.

Wake Forest is led by senior Lexi Franco, who came to Winston-Salem as a five-star recruit from Florida. Last season, she finished 12-8 while going 4-1 in matches. She has grown and improved each season with the Deacons and looks to make her last season the best one yet.

The roster of this year’s team looks very different than the squad a year ago. Emma Davis and Anna Ulyashchenko have both graduated. However, the sister duo of sophomore transfer Carolyn Campana and true freshman Anna Campana have made an instant impact on the squad thus far. In their ITA Tournament match against San Diego, the sisters competed at No. 1 and No. 3 singles spots.

The squad has a break from competition for two weeks before opening up ACC play with a trip to Clemson on Feb. 16. Last season, the Deacons swept Clemson 7-0 in Winston-Salem and look to repeat that feat.

It looks to be another great season on the court for the Deacons over at the Wake Forest tennis complex. The team can definitely use the support of the Demon Deacon faithful at matches throughout this spring.