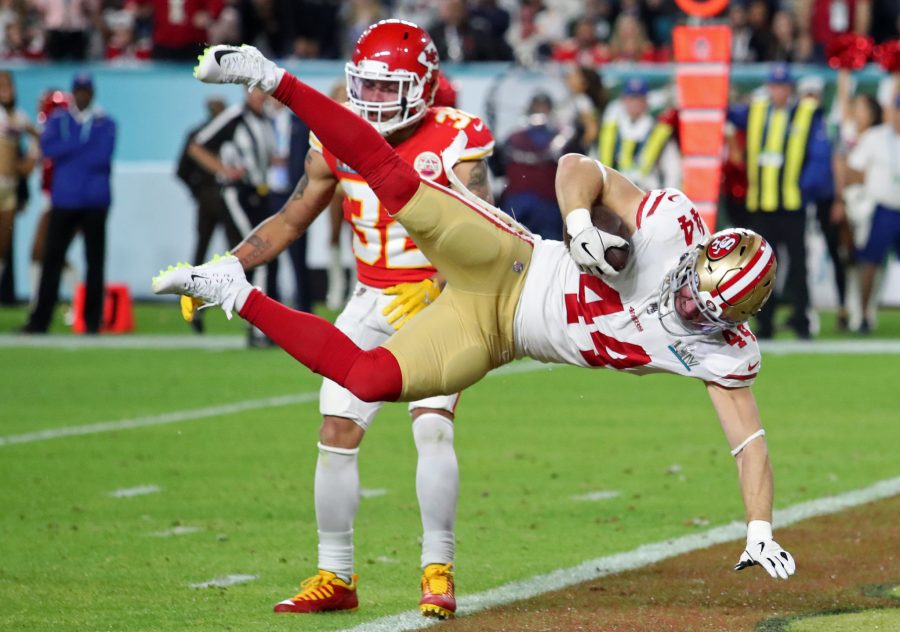 Fullback Kyle Juszczyk of the 49ers dives into the end zone for a touchdown against the Chiefs during the 2020 Super Bowl on Feb. 2, 2020.

After knocking on the door for the past 50 years, the Kansas City Chiefs finally made it to the big game and conquered the elusive title in a 31-20 win against the 49ers in Super Bowl LIV on Sunday night.

In a game that featured one of the most star-studded matchups in recent memory, the single most important one shaped up to be between the two offensive signal-callers (sorry, Shakira and J-Lo).

The game pitched two of the greatest offensive masterminds football has to offer in Head Coaches Andy Reid (Chiefs) and Kyle Shanahan (49ers), albeit in extremely different styles.

Reid built the Chiefs’ offense around stellar quarterback Patrick Mahomes and his ability to stretch defenses vertically with the likes of receivers Mecole Harman, Tyreek Hill and Sammy Watkins to go along with short-to-intermediate targets such as tight end Travis Kelce and running back Damien Williams. At the same time, the 49ers presented a well-oiled offensive machine predicated on the efficiency of its running game to open up play-action opportunities and quick reads for QB Jimmy Garoppolo.

Both teams traded punches in the first half, with the 49ers looking like the better overall team, but with the Chiefs doing just enough to take a 10-10 tie into halftime.

The 49ers seemed to be clicking on all cylinders to start the second half, scoring 10 straight points and intercepting Mahomes in back-to-back drives. The 49ers’ pass rush was doing the unthinkable in stopping the high-octane Chiefs offense and keeping Mahomes uncomfortable in the pocket. Their four sacks marked the most allowed by the Chiefs in the 2019 playoffs. This was a mark even more impressive considering that in the 2019 season Mahomes was sacked only in 3.4% of his pass attempts, according to Pro Football Reference.

The game seemed to follow its natural course, as the 49ers had the most talented roster across the board. Yet, the only position where the Chiefs had the clear advantage, proved to be the crucial one at the end.

Facing a 3rd and 15 down by 10 points with 7:13 left on the clock, the Chiefs needed a momentum-shifting play from Mahomes against a 49ers defense that held them in check for most of the game. Mahomes dropped back deep and, using purely his upper body torque, launched 44-yard-bomb downfield to Hill. Just like that, the Chiefs were back in the game and went on to score three straight touchdowns to seal the second Lombardi trophy in franchise history.

The 49ers’ collective running game, which seemed to be working well up to that point, failed against a suddenly renewed Chiefs defense. It came down to Garoppolo to make plays in the passing game to turn the tide back in the 49ers’ favor. He ultimately proved incapable of gaining back any offensive momentum. He threw a touchdown and two interceptions for 219 yards while completing 64.5% of his passes. Far from a bad outing. Far from an inspired one, too.

In a game where the 49ers seemed to have the better roster, having the best player on the field proved to be enough for the Chiefs to clinch the victory.

Reid conquered his first Super Bowl ring after 21 years of coaching in the NFL. A long-overdue reward to one of the better offensive geniuses of the game.

As for the 49ers, their team has a tremendous upside to be in the mix for multiple Super Bowl trips over the next few seasons. Reid finally got the reward that his offensive acumens deserved. The clock is now ticking for Shanahan.