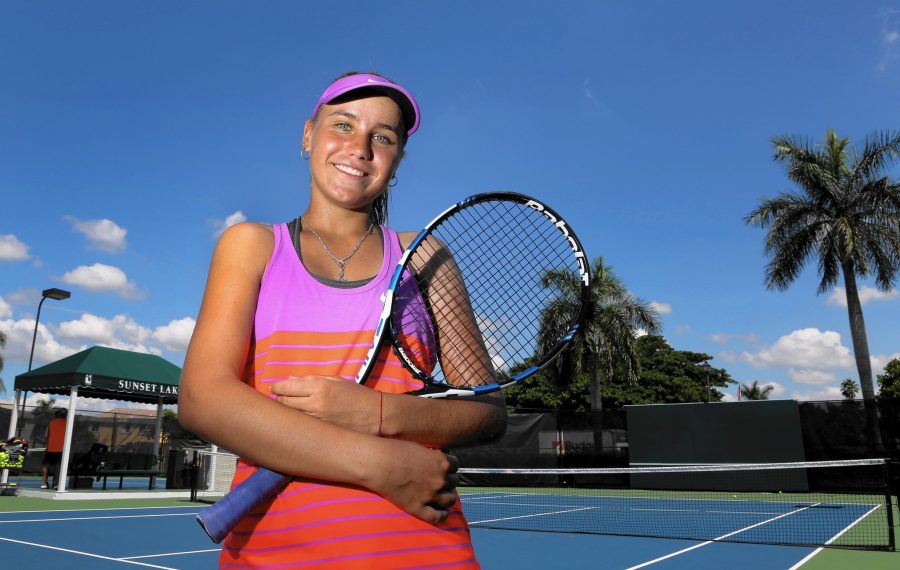 Sofia Kenin is pictured during her days as a top-ranked Florida junior.

On Feb. 1, the winner of the Female Singles’ Australian Open Tournament was crowned. American rising star, Sofia Kenin, beat former No. 1-ranked singles player and Spaniard, Garbine Muguruza, winning her first major title and cementing herself as a top 10 female singles player in the world.

For Kenin, the road to the championship was long and hard-fought. Some notable wins leading up to the finals, included beating the 15-year-old American sensation Coco Gauff, who has stolen the hearts of the tennis world. She also defeated the current No.1-ranked singles player Ashleigh Barty, quite a feat.

Muguruza’s path to the finals on Saturday was certainly a bit shaky. She only played eight matches in all of 2019, ending with a record of 1-7. Injuries prohibited her from playing for much of the year. Ironically, it was the Australian Open championship that would be her eighth match of 2020.

Kenin had significantly more official playing time than Muguruza in the last two years, but she didn’t and still doesn’t have the same accolades that Muguruza does. Muguruza has two major tournament titles and has spent considerable time as the No. 1-ranked singles player in the past.

The match itself was very tense early on. Muguruza’s experience gave her the upper hand and forced Kenin to play very defensively. The Spaniard’s major advantage was her statline of winning 92% of first serve points; she completely controlled the tone of the first set and had a much stronger serve than Kenin. Despite the experiential and serving advantage, the Spanish superstar was unable to put much distance in the score between herself and Kenin. This issue came from many errors. These errors continually kept Kenin in very close hitting range, a pattern that would eventually be her downfall. Despite the issues, Muguruza was confident and won the first set 6-4.

Kenin won the second set leaving her confident and in control, as she was able to reset her mind and treat the set like it was the beginning of the match. Muguruza’s errors continued to plague her and there was some speculation that her injury or fitness was affecting her game. At one point, a trainer looked at Muguruza’s back.

Both players were streaky and Kenin was hot-headed. However, this became her advantage as she was able to completely neutralize Muguruza by playing at a very fast offensive pace. Serving very quickly and getting points swiftly, Kenin won the second set 6-2.

The third set is where Muguruza’s streakiness was truly exposed and exploited. Time after time she hit the ball out and seemed to lose all confidence in herself. She had nine aces during the whole match and even that couldn’t balance out all of the errors. There were glimpses of confidence and experience from Muguruza, but Kenin’s tenacity and burning passion to win managed to carry her forward. Muguruza had seven double faults in the match and had three double faults in a row that ended up giving up the points that cost her the match. Kenin won the third set.

The last two and a half years have been very impactful in the world of women’s tennis. New stars are rising, and it seems like just yesterday superstars like Barty and Naomi Osaka were coming up. Now, they are the ones mentoring and challenging the younger players, such as Gauff and Kenin. It seems that there are more and more talented players emerging. As a result  there will be no worry about entertainment or talent once the greats like Venus Williams and Serena Williams retire. This is a very optimistic future for women’s tennis — a future that will hopefully garner more respect and attention from general audiences.