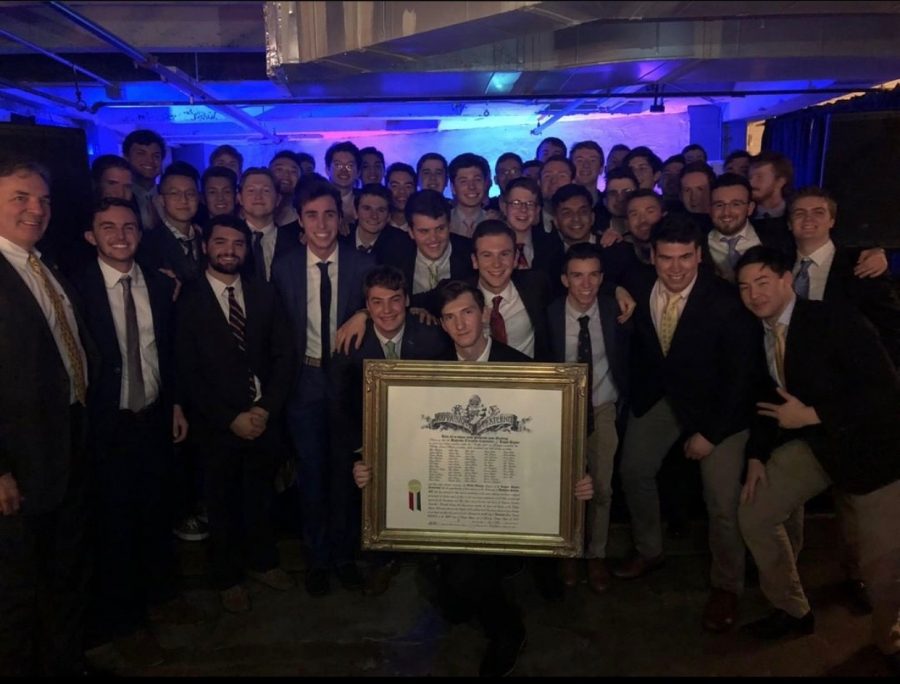 The Kappa Sigma fraternity, which re-established itself as a colony Sept. 28, 2019, received a charter from its national organization Jan. 26, 2020, according to junior Kappa Sigma Social Chair Hogan Disbrow. However, the organization is not officially recognized by the university.

The Delta Omega chapter of Kappa Sigma previously had its national charter revoked and became an unrecognized fraternity by the university in November 2013 “because of conduct unbecoming to a chapter and for violations of Kappa Sigma’s national rules,” according to Disbrow. However, the organization has decided to re-establish itself again as the Delta Omega chapter.

Members of Kappa Sigma and Betsy Adams, the director of Fraternity and Sorority Life, have been in close contact throughout the school year in efforts to establish a path forward for the organization. This process was complicated by the fact that the organization side-stepped many Interfraternity Council (IFC) procedures in an attempt to become recognized by the university.

“I met with the student leaders in Kappa Sigma on several occasions this fall to make sure they understood our process and the potential outcomes of moving forward outside of that process,” said Adams. “I also spoke with Kappa Sigma staff headquarters early in their process, and they were aware that they were operating with disregard for the university’s policy.”

Though she has worked with colonies before at other institutions, Adams explained that this situation was unique, as Kappa Sigma proceeded outside of the policy outlined by the university.

“These conversations have led nowhere as they [Office of Student Engagement] have called us a gang, told us that we would never be recognized on campus during our time as students and have sent letters home to our parents/guardians saying similar things,” Disbrow said.

Adams declines that she referred to any student organization in this way.

According to Disbrow, Adams also told him on Oct. 16, 2019 that once they received a national charter, they would lose the school as a resource.

“Nonetheless we still have actively pursued school recognition on campus and still are unsuccessful in our efforts,” Disbrow said.

However, the IFC amended that bylaw in response to Kappa Sigma’s re-establishment. In addition to defining an unrecognized group as one that has lost national recognition or imitates the activities of a Greek organization, the amendment also defines it as one that “has attained or seeks to attain any form of recognition from an (inter)national fraternity headquarters without having successfully completed the processes outlined by Wake Forest University’s Fraternity and Sorority Life Expansion Policy.”

The majority of Panhellenic chapters, as well as all chapters part of the National Pan-Hellenic Council (NHPC) voted to implement this amendment shortly after the IFC passed their most recent amendment. Panhellenic chapters that voted to enact the bylaw do not support or recognize Kappa Sigma as an organization on campus.

Particular frustration on behalf of Panhellenic leadership in response to the formation of unrecognized fraternities comes from an issue of insurance coverage. According to Adams, a fraternity that is not recognized by their national organization does not have insurance. When Delta Kappa Epsilon was suspended by the university but not their national organization in 2018, they maintained insurance coverage. Kappa Sigma has held insurance since forming as a colony.

According to Adams, because Kappa Sigma and Delta Kappa Epsilon are unrecognized, they do not receive the benefits that recognized fraternities and sororities receive. This includes chapter advising from university faculty and staff, chapter development resources, inclusion in formal recruitment and the IFC, and risk management resources. They also are not allowed to participate in campus events and traditions such as Wake N’ Shake, Project Pumpkin, tailgates and intramural sports.

Adams says the aim of the Office of Student Engagement is to support and guide students, but she warns of the consequences students may face if they choose to associate with an unrecognized organization.

“Our message to parents/guardians informed them of the lack of university support for unrecognized organizations and made them aware of the potential risks regarding [students’] participation in a group that does not receive [u]niversity support and individual conduct charges should something go wrong,” Adams said. “Consequences may include disciplinary actions against individual students/members for activities on and off campus that violate the university’s code of conduct.”

This spring, the university is pursuing expansion, a formal term that refers to the addition of an IFC organization on campus. The Committee on Student Life, comprised of students, faculty and staff, has approved the addition of one new IFC organization and one culturally-based fraternal organization (CBFO). Kappa Sigma did submit an expansion packet, which was reviewed by the Expansion Committee, comprised mostly of students but also including faculty, staff and alumni representation.

“[The Expansion Committee] reviewed Kappa Sigma’s application using the same criteria as any other organization and decided it did not rise to the high level that other national organizations did,” Adams said.

She also said that Kappa Sigma’s national organization’s efforts to defy university policy and re-establish the Delta Omega chapter outside of and prior to the university’s process did not reflect a level of collaboration, mutual respect and trust.

“It was a competitive pool, with 12 national organizations submitting application packets,” Adams said.

Nevertheless, Kappa Sigma has completed their spring rush process without gaining recognition from the university. According to their Instagram, their rush events were open to “all,” and the organization ultimately accepted 13 new members.

According to Disbrow, in order to get a charter from the Kappa Sigma national organization, each pledge had to complete 30 hours of community service, have above a 2.5 GPA, complete seminars on alcoholism and hazing, among other requirements.

“We as a group of young men have decided to form and bring back this historic chapter of Kappa Sigma because we wanted to be a part of something greater than just ourselves,” said Disbrow.  “We are [an] entirely new group of guys that come from all backgrounds. We are open to all backgrounds and do not judge.”

Editor’s note: An earlier version of this article included a sentence that referred to the Interfraternity Council as the International Fraternity Council. The sentence has been updated to accurately reflect the correct name.

Editor’s note: An earlier version of this article included a sentence that referred to the expansion process as an IFC process when in fact it is a university process. The sentence has been updated to accurately reflect the situation.

Editor’s note: An earlier version of this article included a sentence that incorrectly stated Kappa Sigma did not have insurance as a colony when in fact they did. The sentence has been updated to accurately reflect this.

Editor’s note: Betsy Adam’s response statement to a quote from Hogan Disbrow is an addendum and was not published in the original article.