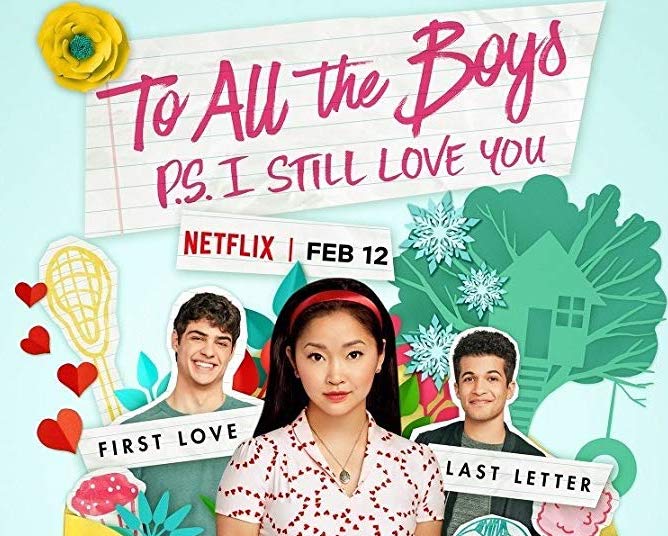 Yesterday was a great day, because Netflix finally released the much awaited sequel of To All the Boys I’ve Loved Before (TATBILB). The second installment of the trilogy based on the books by Jenny Han is conveniently named To All the Boys: P.S. I Still Love You. Fans have eagerly and impatiently waited for the newest film after the immediate success of the first. In dilligently completing my duties, I woke up early yesterday morning to check out the latest with Lara Jean (Lana Condor) and Peter (Noah Centineo). Now I can say with confidence that fans will be very satisfied with where this film takes its beloved characters.

In P.S. I Still Love You we pick up almost exactly where the last film ended. If you need a refresher of what happened in the first one, Netflix provides a handy two-minute recap before the second one begins. Lara Jean and Peter are happily settled in their relationship, but each quietly harbors their own fears: Lara Jean is insecure about Peter’s past relationship with Gen and Peter worries that he can’t match Lara Jean’s level of romantic gestures. Both of these issues are amplified when another of Lara Jean’s letter recipients, John Ambrose McLaren, writes her back. Who doesn’t want a love-triangle plot twist to spice things up?

One of the best parts of the first movie was the lovable supporting characters, and they’re all back for round two. Lara Jean’s younger sister Kitty brings the most laughs with her witty one-liners and raisonneur energy. There is the introduction of an interesting b-plot that has Kitty using her matchmaker skills to set up her dad with an attractive new neighbor.

Stylistically, the new film keeps very much in line with the first installment. With vivid sets and wide, sweeping shots, the filming itself is very romantic. The opening scene shows Lara Jean dancing around her famously messy teal bedroom while trying on dresses for her upcoming date with Peter. The camera waltzes with Lara Jean as she twirls, letting the audience share in her youth and vitality. With regards to music, the soundtrack for this film, like the first, is spectacular. It is simply a compilation of up-tempo girl group classics, and the occasional K-Pop hit; cue “Kill this Love” by Blackpink.

The book series that the movies are based on is made up of three novels, leaving one film left to be released. We know from Condor’s interview with Jimmy Fallon that the last film has already been shot (before Centineo shaved his head, praise the lord). So while I rewatch the first two on a loop in anticipation for the last one, make sure to check them out for yourself. There’s really nothing like a solid rom-com.