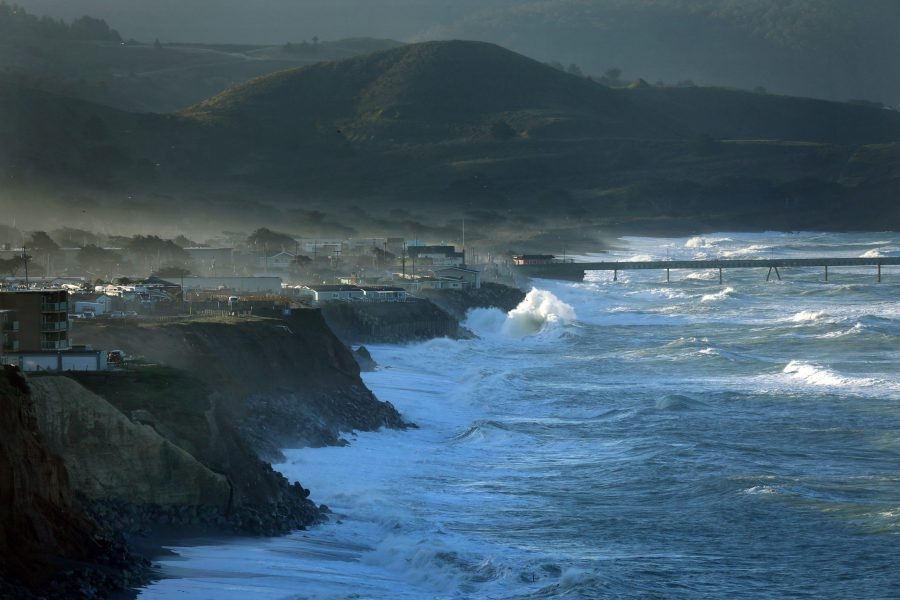 The town of Pacifica, just south of San Francisco, is ground zero for the issue of coastal erosion. On Jan. 20-21, the combination of ocean surge and a king tide caused high waves. Some homes and apartment building have already been lost to the forces of nature. (Carolyn Cole/Los Angeles Times/TNS)

I would imagine a lot of people would like to be at the beach right now. But not at the beach — right now. The idea of walking along a windswept sandy isle or tanning underneath the faint glimmer of the sun in 40 degree weather is not at all appealing. I mean a lot of people presently would like to be at the beach in the summer, we are currently in the middle of a North Carolina winter — if you haven’t noticed — which usually spans around the end of January to the beginning of February. You could make the point that this is not really winter — that it’s just a messy collection of rainy days and nights with a couple of suspiciously pleasant afternoons interposed — and I would accept that. However it’s still awful weather and most people would like to get out of it.

Life can be as destructive as a tsunami but can also be as peaceful as an afternoon floating in the shallows. ”

The cultural history of going to the beach marks its origin as a holiday in Britain. The healthy benefits of a trip to the coast were found in the clear air, cold seawater and a great view of the horizon. However truly beneficial this was to the average health of an individual in that time is relatively unclear — but it had to have been better than sticking around in the disgusting environment of Britain’s industrialized cities. But at that point beach holidays were to be had only by the upper classes of England, and it became a sort of competitive sport between them that eventually fell out of fashion and trickled down to the middling, working classes. Nowadays there are entire towns, cities and corporations built on such an idea.

So it’s pretty obvious that going to the beach is a thing — an ingrained social habit grossly enlarged by our market economy — the real question is: what do I think of it? This is an opinion piece after all.

Well, like a lot of people, my inner psyche is very much involved with this form of escapism. Any rationally minded person needs this kind of retreat from the overbearing constraints of our chaotic, attention seeking society in order to focus on the kind of beauty that doesn’t even ask for attention. Going anywhere — the woods, the mountains (well the woods are very similar to the mountains) — is extremely helpful, but it must be argued that there is a special kind of expansive allure about the ocean. If you have seen any sea or body of water before, you realize that there is a certain commonality between human experience and the vast expanse of ocean. It lies in the rhythmic flow of the tide, colossal space and instant flux between tranquility and intense storms. Life can be as destructive as a tsunami but can also be as peaceful as an afternoon floating in the shallows.

I’ll conclude with some parting warnings about big, corporate beaches that have so many people on them that you can’t get an actual view of the ocean. Yeah, I’m partial to a solitary experience in nature, but what I’m recommending is just some quality time with your friends or family where you can actually experience the ocean and not just a crowded piece of our society transposed onto one of the last standing frontiers of our once beautiful planet.