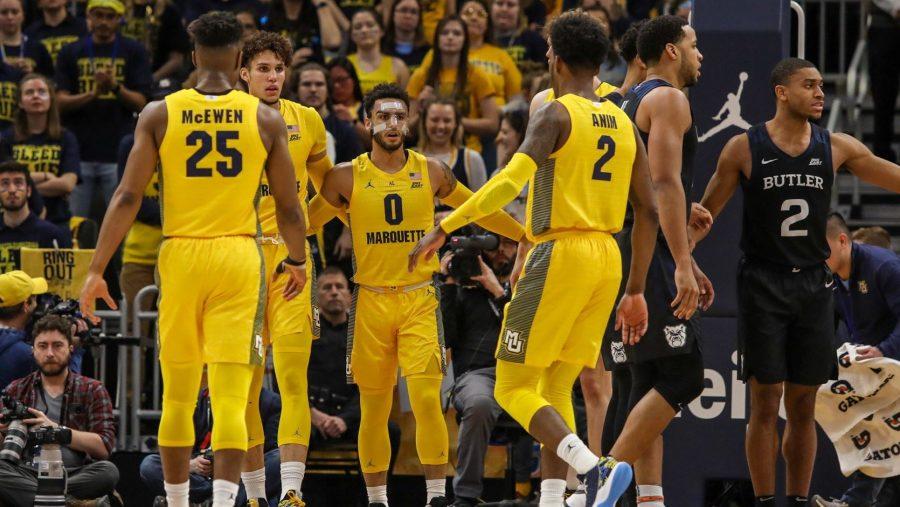 No. 19 Butler at Marquette

The No. 19 Butler Bulldogs journeyed to Milwaukee Sunday afternoon for a crucial in-conference matchup against the unranked Marquette Golden Eagles. The contest had significant ramifications regarding the standings in the Big East, as both squads entered the matchup with a record of 6-4 in conference play.

The Golden Eagles’ home crowd proved to be too daunting for the visiting Bulldogs, as Marquette defended its home court with vigor, stealing the show in a lopsided 76-57 victory. Golden Eagles starters Brendan Bailey (forward), Markus Howard (guard), and Koby McEwen (guard) carried the load offensively, combining for 49 points and 10 assists in the victory. The Bulldogs struggled to find their footing offensively, connecting on just 38.3% of their field goals and making only four 3-pointers. The Golden Eagles’ defense certainly deserves a share of the credit, as they forced 12 turnovers and blocked four shots in an impressive overall performance.

With the win, the Golden Eagles collect their third consecutive win and climb into a tie for second in the Big East. Butler, on the other hand, travels home empty-handed and falls into a tie with Providence for the third-place spot.

The college basketball world watched eagerly Monday night as the long-anticipated matchup between the No. 8. Florida State Seminoles and the No. 7 Duke Blue Devils unfolded within the storied walls of Cameron Indoor Stadium. Both teams entered the contest with a stellar in-conference record of 10-2, each looking to take a massive step toward snagging the lead in the ACC.

In an absolute thriller, the Blue Devils emerged with a narrow five-point victory in which Duke held the lead for the game’s last 13 minutes. Duke shared the wealth offensively, as four Blue Devils ended the contest in double figures. The home squad shot an efficient 45.1% from the field, cashing in on just over 41% of their 3-point attempts along the way.

The rims, however, were not as kind to the visitors, as the Seminoles couldn’t seem to find the twine; their field goal percentage had dipped well below 40 before the final buzzer sounded, including an abysmal 3/18 performance from 3-point range. With the victory, Duke’s résumé receives a huge boost as they grab hold of second place in an ACC conference filled with title contenders. Florida State falls to 20-4 on the season (10-3 in-conference) and will look to bounce back against Syracuse on Saturday.

Two West Coast heavyweights will lock horns in Eugene on Thursday night as the Ducks look to snap a two-game losing skid and leap into a share for first place in the Pac-12. Offensive fireworks are sure to ensue.

The top-ranked Baylor Bears will face one of their toughest tests thus far as they host a solid West Virginia team with victories over the likes of Ohio State and Texas Tech. The Mountaineers are sure to leave it all on the line as they look to claw their way toward the top of the Big 12.