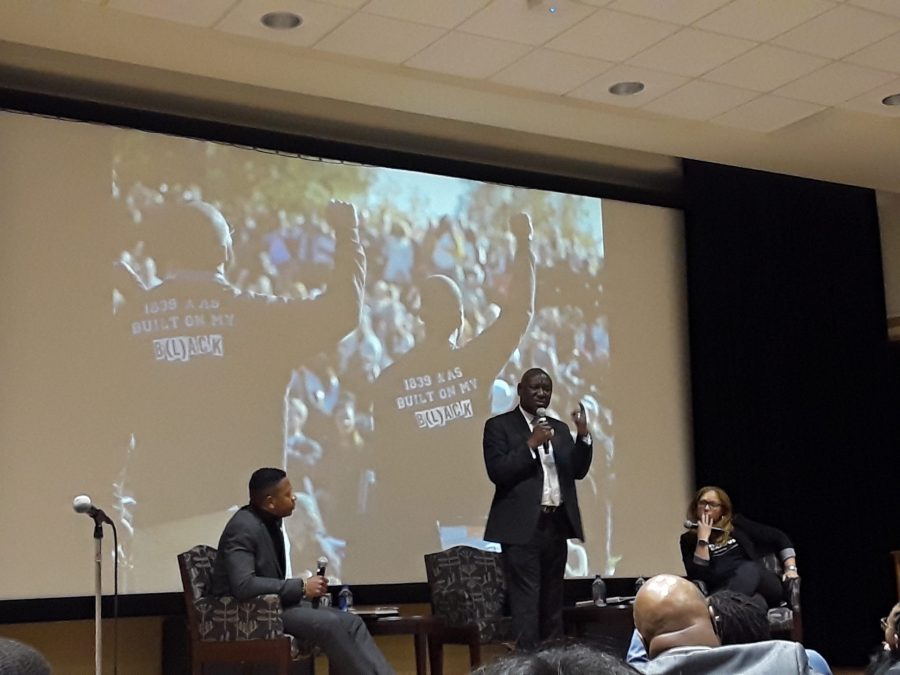 On Wednesday night, members of the university community united in Pugh auditorium for a conversation with renowned civil rights attorney Benjamin Crump. Crump is known for his involvement in many contentious, high-profile court cases in the United States, including the murders of Trayvon Martin in 2012 and Michael Brown in 2014.

The event was sponsored by the School of Law, the Intercultural Center and the university’s chapter of Alpha Phi Alpha, an African-American fraternity. The conversation included Student Government Speaker of the House Miles Middleton and Maya Angelou Presidential Chair and Professor Melissa Harris-Perry. The event began by establishing Crump’s extensive involvement in civil rights and justice, asserting that his legacy is built around the idea that the United States constitution applies to everyone, on every level of society.

Middleton said that they took the opportunity to invite Crump largely because of the university’s recent discussions regarding racial inequality. The impetus for such discourse stretches across the university’s history. From 1860, when the first endowment profited off the auction of slaves by the board of trustees, to 2019, when campus was wracked by a racist Instagram post and the resurfacing of old yearbook photos depicting students in blackface and current university deans posing in front of Confederate flags when they were students in the 1980s. As such, the administration has launched several initiatives seeking to address the issue of racism in the university’s past and present — examples of which include the President’s Commission on Race, Equity and Community and the Committee on Slavery, Race and Memory.

Middleton stated that he believed conversation to be very important in enacting progress in social justice, and that Crump was the best person to help facilitate that.

Harris-Perry helped established the context of the Trayvon Martin case to the audience by stating the basic facts: a 17-year-old African-American boy carrying groceries back to his home in Sanford, Fla., was shot and killed by George Zimmerman, a local community member of the neighborhood watch who believed Martin was acting suspicious. Zimmerman was not arrested, and only one television news outlet provided any coverage of the event at the time, largely because of the NBA All-star game taking place in Orlando.

“I cannot describe the voice coming out of the other end of the telephone,” Crump said, describing one of the initial phone calls he received from Martin’s father.

At the time, Crump assumed the police would arrest Zimmerman immediately. This was not the case. The arrest took 32 days, after social media activists and later news coverage prompted it. Crump said that he had many doubts about the possibility of success for Martin’s family, which he discussed with his law partner at the time, Daryl Parks.

“Daryl told me, ‘you know, we’re going to spend all our time, our resources and our money and they still probably won’t arrest [Zimmerman],’” Crump said. “And I remember telling Daryl, ‘you’re probably right, but if we don’t do something, who will?’”

Crump went on to discuss the context of Martin’s death among the other major instances of racial injustice throughout the history of the United States. He recalled the 1857 case Dred Scott vs. Sandford, the torture and murder of Emmett Till in 1955 in Mississippi and the shooting of Michael Brown in Ferguson, Mo., in front of 14 witnesses in broad daylight.

Crump shifted his focus again to discuss a 2015 case he was involved in: the prosecution of Daniel Holtzclaw, an Oklahoma city police officer who used the power inherent in his position to sexually assault 13 black women in a six-month period in 2014. The victims’ ages ranged from 17 to 55 years old. One of his final victims was Jannie Ligons, a 57-year-old grandmother who managed to file a police report despite her fear, igniting a chain of events that led to Holtzclaw’s arrest and eventual conviction. Crump deplored the minimal media coverage that the case received, asserting that the racial and socioeconomic demographics of the victims caused news outlets to be uninterested.

“If [the victims] weren’t black women, Nancy Grace would be crying about it every night,” he said.

Other audience members agreed that there still is inherent racial prejudice in the viewpoints of many people in the United States.

“Though I can build a computational model and use it to graphically recreate the U.S. prison system based on how it functions and how it treats black people, I can still have a conservative sit there and tell me that our experiences are subjective lies and propaganda,” junior Chi Nwakuche said. “I love that [Crump] is here, and that in moments and spaces like this we get to speak our truth.”

The conversation ended with a question-and-answer session. One query was related to how young people and students can be engaged in politics.

“Voting is one tool in the toolbox,” Harris-Perry said. “Being informed at the most local level possible is also important. It may be hard to change who the president is, but you can definitely change who your city councilmember is.”