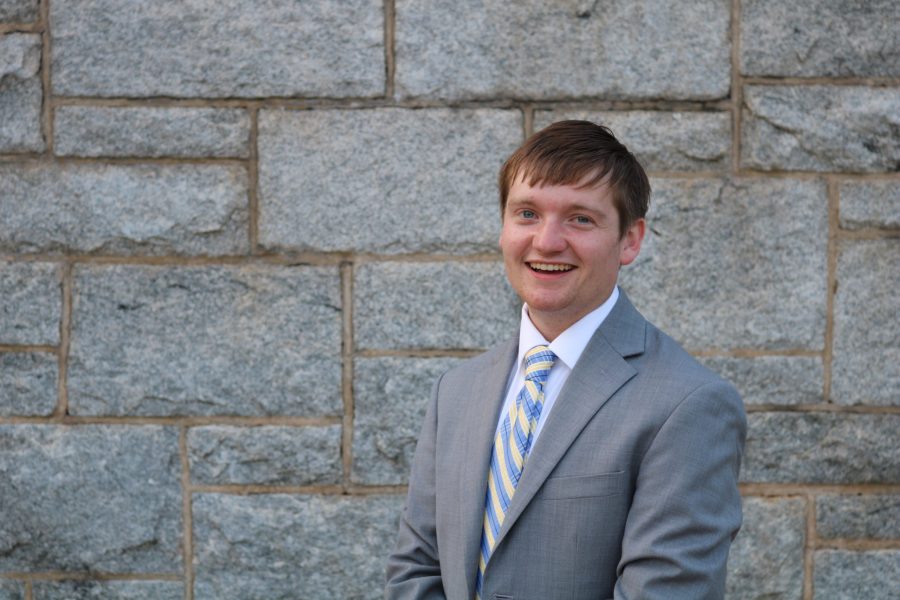 Senior Andrew Wilson, a history major with minors in English and Latin American studies, has likely had some level of interaction, albeit indirectly, with almost every student at the university through their clubs’ budgets. As the treasurer of Student Government and the chair of the Student Budget Advisory Committee (SBAC), it is Wilson’s job to lead SBAC in determining how the university’s $600,000 budget for student organizations is allocated among the many clubs and organizations on campus.

Outside of Student Government and SBAC, Andrew has also been involved with the Baptist Student Union since freshman year and is a member of the 2019-2020 cohort of President’s Aides.

Most people probably know that you’re the treasurer of Student Government, but what is one thing about you that we’d be surprised to hear?

That’s a good question — starting off good. Well, I’ve been to Cuba before, twice. First time I went was my freshman year and then in junior year. I went with the Baptist Student Union and we went on a mission trip for spring break both times. In 2017, my freshman year, that was the first time I had ever been on an airplane or been out of the country. It was a wonderful experience — I know just enough Spanish not to get lost. We worked with [Baptist] churches that were in the area. We were in Havana and another city called Matanzas. Great people — I had the Cuban cigars and the beaches were wonderful.

So, the Baptist Student Union has been an important part of your life here, in addition to Student Government.

Oh yes, I’d say so. [Baptist Student Union] was the first organization I joined when I got to Wake Forest and I’ve kept with it ever since. I met some of my best friends doing Baptist Student Union. I’m not actually Baptist myself, but I do it when I’m here at Wake Forest. I’m the outreach coordinator, and we’ll do [intramurals] and stuff like that. I’m our intramural basketball coach, and I don’t do them too many favors, but we try to get out and have a good time.

Tell me how you first got interested in SBAC and Student Government.

I did Student Government in high school — I was student body president there. My granddad was really into local politics back where I’m from, and I liked the idea of being able to help people and serve. I ran for Student Government my freshman year and lost. Then I heard about this opportunity called SBAC and you could get appointed to it. So Kathryn Webster was the outgoing treasurer at the time, and I interviewed with her and was able to get on SBAC. I figured it was a way I could learn about something I didn’t know too much about, and still be in Student Government and serve. I did SBAC my sophomore and junior year, and ran for treasurer and somehow won at the end of last year.

What has been the most rewarding aspect of your job and what have been the biggest challenges?

It’s always so rewarding when an organization will come to us with a great idea to host an event on campus, or maybe it’s a club sports team and they’ve qualified for nationals or regionals, and we’re giving them the money to help them get there. It’s so rewarding because you’re getting Wake Forest’s name out there or you’re facilitating an opportunity on campus for students to find their place — and that’s what SBAC is. That’s how most people really interact with Student Government and they don’t even know it, necessarily — through their organization’s funding. I like that Wake Forest’s in a position that we can afford to help students live their passions, whatever that may be.

Yeah. Do people think you’re made of money?

They do. They call me the “Money Man” sometimes. (Laughs). We have guidelines that are in place for how we can give out the funding. Some of that comes from the university and some of that is our own internal [way] of how we draw the line in the sand. So, you get nasty emails every now and then from frustrated groups, and that comes with the territory, I guess. You’d like to help as many groups as we can, but we do have to draw the line somewhere.

How have you changed the role of treasurer?

I was very fortunate to have a great predecessor in Sydney Packard. She had held the job for two years before I got there, and she had laid a lot of groundwork and really took SBAC to the next level. I think I’ve just kind of built on that, and I think we’ve made it more user-friendly. We’ve made it so that you can use online Sakai modules instead of having to attend [student organization] treasurer trainings in person that take a long time and everyone might not be available for. At the beginning of the semester or the beginning of the year, particularly if it’s a new treasurer, he or she isn’t going to know how to expect all of this stuff. I also think that I just really try to build up that personal touch. When we have a group come present to SBAC, I always try to meet them in the lobby and shake their hands and tell them what the room’s going to be like and try to walk them through the process.

How has the role of treasurer changed you?

Well, I think it’s certainly given me higher blood pressure at times. But it’s also made me more, in a way, conversely relaxed, reassured that it will work out at the end of the day. It’s helped me learn how to delegate more and appreciate those people that are on your team. We have a great organization with SBAC and the Student Organization Financing Office (SOFO), which I also work at. I just really appreciate the support I have in the role.

What parting advice do you have for your successor?

That’s a lot of money.

It’s a lot of money and it’s a big responsibility, and we don’t take it lightly.

What’s next after graduation?

Oh, that’s the million-dollar question — the senior question. This past summer, I interned for Human Resources (HR) — I was an HR investigator — for Regions Bank in Alabama. I worked with compliance and associate conduct, like on theft cases or harassment, for some examples. I had a great experience and they hired me back full time. So I’ll be on the same team in the same city working with Regions [Bank] after graduation. I enjoyed it because we’re working with numbers, but we’re also working with people, and it’s a good balance between the two.