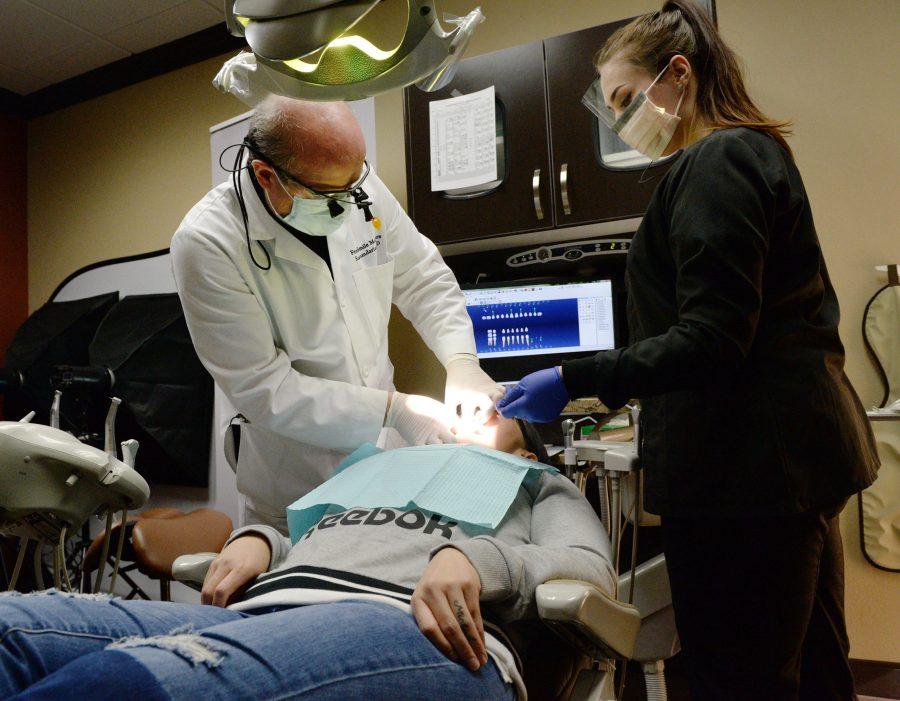 Erlinda Vargas of Fresno receives her new implant-supported permanent dentures from Dr. Sam Namdarian during her last appointment to replace her own missing and decaying teeth at Fresno Smile Makeovers in Fresno on Monday, March 4, 2019. Vargas is the first recipient of the Fresno Oral Maxillofacial Surgery & Dental Implant Center's Second Chance program to help people with extensive tooth loss and other oral health issues but who are unable to afford proper treatment. Vargas suffered through domestic abuse in her family as a child and did not receive proper dental care leading to her oral health issues. (Craig Kohlruss/Fresno Bee/TNS)

If you’re due for wisdom teeth surgery, don’t be too trusting of the Vicodin prescription your oral surgeon recom- mends for pain. People between the ages of 13 and 30 are nearly three times more likely to continue use after their initial post-surgical opioid prescriptions.

Dentists are one of the most frequent prescribers of opioids in the United States. However, many researchers sug- gest their perscribing of opioids is un- necessary. A study published last month in e Journal of the American Den- tal Association reports that the use of nonsteroidal anti-in ammatory drugs

(NSAIDs), such as Ibuprofen, are just as, if not more e ective than opioids for acute pain management.

NSAIDs work by inhibiting sub- stances in the body that promote pain, in ammation, and fever. Studies have shown that these medications, while still e ective, generate signi cantly less adverse e ects (like drowsiness, nausea, and trouble breathing) than do opioids.

Vicodin is a combination of acet- aminophen (Tylenol) and hydrocodone (an opioid) and has been considered the “gold standard” of pain management after oral procedures, such as wisdom teeth surgery. Opioids work by bind- ing to opioid receptors on nerve cells and mimicking endorphins, e ectively reducing the spread of pain signals through the nervous system. Contin- ued use of opioids can lead to tolerance, meaning more is needed to create the same e ect. is can then lead to depen- dence and, eventually, addiction. About

“In 2017 alone, more than 70,000 people died from drug overdoses, mak- ing it a leading cause of injury-related death in the United States,” according to the CDC. “Of those deaths, almost 68% involved a prescription or illicit opioid.”

A study published by the CDC in 2017 found that after only the third day of taking prescription opioids, the prob- ability of chronic opioid use increased rapidly. Most oral surgeons write a sev- en-day prescription after wisdom teeth surgery.

“After only my second day post-sur- gery, my pain had mostly gone away, and I felt too nervous to keep taking my Vicodin pills,” commented Lizzie Swey- er, a senior who had her wisdom teeth removed this past winter break. “I had heard stories of people my age becoming addicted, and I didn’t want to risk it.”

In addition to the potential for an oral surgery patient to become a chronic opioid user, the over-prescription of these drugs increases the opportunity for drug diversion, an illegal practice of transferring a prescribed drug to some- one else.

According to a study published by Drug and Alcohol Dependence, over 100 million opioid analgesic pills are left unused after outpatient oral surgery ev- ery year in the United States. ese pre- scriptions are a major source of diverted pills and further drive the problem of the opioid epidemic in the U.S.

The researchers from this study made their position on the topic clear: “With the increasing concern about prescrip- tion opioid abuse within the United States, oral surgeons and other dental clinicians have a moral responsibility to limit opioid exposure, to explain the risks of opioid misuse, and to improve patient education on drug disposal.”