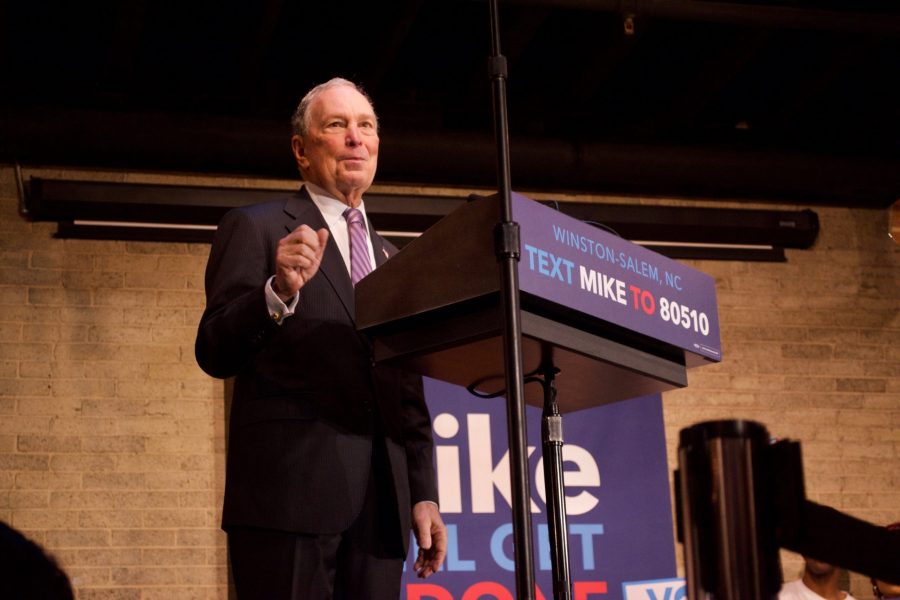 It’s atypical to find a line wrapped around the block at Foothills Brewing, especially at 7 a.m. in the pouring rain. The line wasn’t for beer, but instead to see presidential candidate Mike Bloomberg address the Winston-Salem community. As Bloomberg acknowledged, it’s not every day that a presidential candidate visits the smaller city of Winston-Salem when campaigning in North Carolina.

On Thursday, Feb. 13, the Bloomberg campaign held a rally at Footnote Coffee & Cocktails, a coffee shop owned by Foothills. This was the first stop of the day for Bloomberg in promoting early voting in North Carolina, before he traveled eastward to other cities in the state, such as Greensboro and Raleigh.

The event was originally slated to be held at Campus Gas, but was moved to Footnote due to a high number of RSVPs, according to the Winston-Salem Journal. The North Carolina Deputy Veterans Affairs Director of the Bloomberg campaign said that over 900 people had reserved a spot to attend the event. Though the exact number at the event was uncalculated, Footnote, a significantly larger space than Campus Gas, was packed to the brim. The campaign said they were very pleased with the turnout.

The event began as Winston-Salem’s mayor, Allen Joines, welcomed Bloomberg, though he did not endorse him. Bloomberg has, however, been endorsed by the former governor of North Carolina, Bev Purdue.

Bloomberg’s somewhat unconventional decision to skip early state contests, such as Iowa and New Hampshire, has allowed him to spend more time in North Carolina and other Super Tuesday states, in which he will be competing. He started his speech by declaring that North Carolina deserves just as much attention as South Carolina, another early state, as the crowd erupted in cheers. He also cracked some jokes about his record-breaking campaign spending.

Bloomberg’s primary motivation for running in this race is no secret.

“I am running to defeat  [President] Donald Trump,” Bloomberg said. “I am also running because I want to put the ‘United’ back in the United States of America.”

Bloomberg touted his record as former mayor of New York City, a position he was elected to directly following 9/11. He referenced his work rebuilding the city by adding 175 units of affordable housing and by creating more than 500,000 new jobs. He also described that his role as mayor has given him experience in forming teams and in working across the aisle.

As his slogan states, Bloomberg is focused on “getting it done.” In his speech, he advocated for passing common-sense gun safety laws, establishing America as a global leader in the fight against climate change, formulating better immigration policy and protecting a woman’s right to choose.

“I believe the way to beat him is with workable, sensible policies,” he said.

Additionally, Bloomberg enters the race from a unique position, given that he and Trump knew each other well from living in New York. This gives Bloomberg the platform to speak about Trump’s character outside of politics. He told the audience that he “knows how to deal with Trump,” calling him a “conman from the beginning,” and has boasted about beating Trump already by helping to flip 21 house seats in the 2018 midterm election to give Democrats control.

Attendees wait in line in the rain before Bloomberg’s event in downtown Winston-Salem.

Many university students set their alarms early to get in line and catch a glimpse of what the former mayor had to say.

“I’ve never done anything like this before,” said junior Becca Spritzer. “I wanted to take advantage of the opportunity to see someone who might get the Democratic nomination. Students should definitely hear what he has to say.”

Students were pleased with the event and didn’t let the rain deter them from attending.

“It’s really exciting to have a presidential candidate in Winston-Salem,” said senior Andrew Wilson. “I liked what he said, though it was a little short.”

Though many students are currently unsure about where their political allegiance lies, they attended the event to get more information about Bloomberg, as the Democratic field remains crowded.

“There are so many candidates still in the primary, I wanted to get more information,” said junior Samantha Horowitz.

Other students have an idea of who they are going to support, but attended the event out of curiosity. Junior Caroline Fatemi, for example, currently supports Elizabeth Warren, but would consider supporting a candidate like Bloomberg, especially if he gets the Democratic nomination.

“The fact that he’s here in Winston-Salem is exciting,” said Fatemi, who wanted to attend the event as an engaged political citizen. “It’s nice for the community and the university.”

The event was particularly beneficial for many students who are still trying to find a candidate to get behind. For senior Walter Jackson, Bloomberg could be the one.

“I’m more of a moderate Democrat, so I’m trying to figure out if Bloomberg could be the right choice for me,” Jackson said.

Rather than attending out of curiosity, many community members also attended the event because they support Bloomberg as their first-choice candidate. Lila Cruikshank was committed to seeing Bloomberg speak, after missing out on a previous campaign event the week before in another part of the state. She saw former President Barack Obama speak in North Carolina during his first presidential campaign, which she fondly remembers.

She based this assertion on her experience living in New Jersey shortly after 9/11, when she saw firsthand the work Bloomberg did as mayor.

“I saw New York getting cleaned up,” Cruikshank said. “It looked cared for.”

She also noted his unique perspective on managing large groups at Bloomberg L.P.

“He’s even more personable and smart than I could have imagined,” Cruikshank said. “I knew I liked him before, but now I’m sold.”

She plans to canvas for Bloomberg and knock on doors leading up to the North Carolina primary.

After the impeachment trial and unsuccessful effort by Democrats to remove Trump from office, Bloomberg presents this election as dire.

“Let me tell you what the ‘it’ is, however in ‘get it done’,” Bloomberg said, “It means winning this November and sending Trump back to Mar-a-Lago permanently.”

This may not be the last time Bloomberg visits the city of Winston-Salem. He has opened a field office downtown at 501 N. Liberty St., located by the bus station, as his campaign team hopes to gain momentum. The office employs many young field organizers, including recent Wake Forest alumni.