The Morning Show: From Reality To The Screen 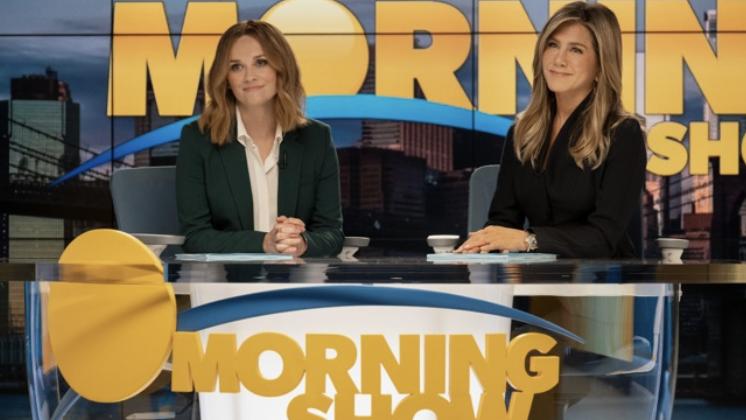 Though Apple TV’s + flagship offering looks, sounds and casts like great TV, director Mimi Leder’s faulty depiction of daily newsroom activity compromises the series’ authenticity. I should know. I worked for the morning news show the series is based on.

The Morning Show (also the name of the show-within-the-show, referred to as TMS) profiles the fictional UBA network grappling with the downfall of The Morning Show’s lead co-anchor Mitch Kessler, who has been accused of sexual misconduct. Things escalate quickly as the network and the show attempt to reconcile internal strife while producing a seamless newscast that refrains from revealing the chaos. In the meantime, a previously unknown news anchor who went viral in a controversial video is slated to fill Kessler’s seat.

The show’s handling of this crisis is somewhat inaccurate, as far as workplace standards are concerned. Again, I would know. I worked on that morning news show in the wake of the removal of one of its longtime anchors, Matt Lauer, also accused of sexual misconduct.

For one, each character spends most of each episode yelling at each other to the point where it seems like they are just yelling for yelling’s sake. How they don’t become hoarse is a mystery. Even under tense and stressful circumstances, Executive Producers (EPs) do not barge around control rooms and studio hallways screaming and cursing out their colleagues, as is character Charlie “Chip” Black’s normal routine. EPs often praise their colleagues for producing a great show, though you wouldn’t know it from watching The Morning Show.

When Alex Levy (Jennifer Aniston) protests anchoring the show unless Chip can promise her the network will renew her contract and honor her requested terms, she finally sits in her anchor chair just seconds before the show goes live. It’s designed to be dramatic and suspenseful TV, which it is. But, even on a normal day in the series, the anchors sit in their chair just seconds before the show starts. This isn’t how it really goes down. Anchors spend at least an hour at the desk pre-taping headlines and reviewing scripts. They don’t pout in their dressing rooms like Alex Levy and Bradley Jackson (Reese Witherspoon), only miraculously appearing in the studio just seconds before air. The nonchalant attitude of The Morning Show anchors do not adequately represent the day to day work of national news anchors. Instead, their actions perpetuate the stereotype that television news anchors do nothing but read the teleprompter and look pretty. This is a gross understatement of their roles. They often research and co-produce their own stories in addition to delivering them to the American people.

Anchors and professional journalists very rarely, if ever, go off script. However, it seems that this is the norm on TMS, which sends Chip into a frenzy of rage and network executives calling the studio. Anchors also do not have random breakdowns on live TV, although these meltdowns only speak more highly of Aniston’s acting.

Photo courtesy of imdb.comJennifer Aniston won the Best Actress in a Drama Series SAG award for her role.

The series awards the anchors very little time to report any news, making it difficult for the viewer to believe they are actually as talented at their jobs as we are led to believe. We are also led to believe that  TMS anchors are infamous for garnering a “we’re among people” connection with their audience, but viewers never have the chance to see this for themselves. In fact, The Morning Show feels almost intentionally sealed off from the rest of the world. In contrast to the morning news shows it emulates, there are no studio windows and the anchors never come into contact with the general public. There is also the premise that Alex Levy is a world-renowned journalist, but she comes off as cold, unanimated and lacking empathy, though I’m sure this is intentional.

Despite its inaccuracies, The Morning Show is always entertaining, tackles real world issues and is sometimes so suspenseful you can’t help but catch yourself holding your breath. I really haven’t given the series the credit that is due, especially since they do correctly portray many enigmas of the New York morning news show world. It’s smart, clever and most importantly, timely. Delightfully, the New York City scenery transports the viewer to the heart of the big apple, as they daydream of taking a walk around in Alex Levy’s apartment and attending lavish media galas.

It is also brilliantly acted. Most notably, Hollywood favorites Aniston and Steve Carell display some of their best performances to date and demonstrate a more serious acting skill set not always present in their claim-to-fame series Friends and The Office, respectively.

Billy Crudup’s performance comes as a surprise. He plays a slimy and annoying, yet charming network executive, delivering one of the strongest performances of any cast member. He’s the character we want to hate but can’t bring ourselves to. Plus, he and Bradley go on a private Barney’s shopping raid, so there’s that.

Better yet, The Morning Show sticks the landing, big time. The finale is one of the best episodes of TV so far this year, keeping the viewer engaged until the very last second. I won’t reveal what happens — it’s something you have to see to fully appreciate. It left me with an overall positive feeling of the series, regardless of its over-dramatism and inaccuracy, as well as a yearning to watch the second season, which will be available on Apple TV + in November of this year.