Queens Dazzle At The Drag Show 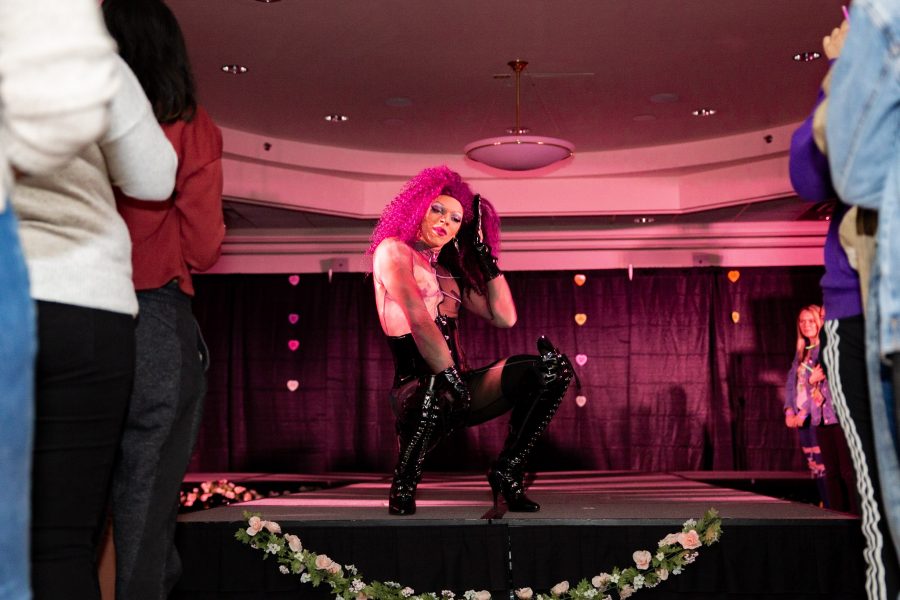 I didn’t know what to expect walking into the Queen of Hearts Drag show in Benson University Center for Valentine’s Day. Aside from the occasional episode of RuPaul’s Drag Race, I had never been to a Drag show before. By intermission, my jaw was on the floor and I eagerly anticipated meeting the Queens after the show. My friends and I waited in the photo op line, took our picture and quickly moved to the side to allow the next fans to take their turn. I hovered slightly near the edge of the crowd, but largely felt I had missed my opportunity to ask them questions for this article. As everyone prepared to go back into 401 for the second half, the Queens noticed me and my trepidation, calling over to me with a generous, “Did you want a picture sweetheart?”

I almost lost my nerve to ask if I could bother them with my questions, but upon hearing I was writing an article for the newspaper, they invited me back into their dressing room for the “VIP experience.” Suddenly I was pulled from the world of an audience member to that of the entertainer. I felt as though, just like Dorothy, I had peeked behind the curtain, but instead of a short bald man crushing the illusion, I was welcomed into a warm circle of wigs, thigh-highs and magnetic charisma unmatched by any other. Queens in various stages of undress swirled around me in an organized chaos.

The Queens called out to one another, making jokes, asking for help changing, immediately at ease in the comfort of their dressing room. Tallulah van Dank led me into the room saying, “I’ve gotten ready in a beer closet. In a bar, like when they come and get more beer when I’m changing.” They had taken over the room: suitcases overflowing with costumes, tables covered in hairspray bottles, wigs treated with more TLC than I give my own hair. Crystal Brooks was already dressed in her act two costume, a green and black bedazzled bodysuit meant to replicate the look of classic Kim Possible character Shego. She was missing the black glove, and in a moment of frustration yelled, “I’m not here for this shit. I’m going home.” The Queens all burst into laughter at the dramatic statement and Crystal was ushered to the stage — gloveless.

Photo courtesy of Riley Herriman / Wake Forest PhotoIn both her acts, Ms. Lolita Chanel got emotional reactions from the crowd. She leans down to take the hand of a young girl in the audience.

The clear leader of the chaos, was Ms. Onya Mann. As the MC for the night, she held a certain poise and spoke with confidence. In fact, all the Queens radiated confidence. Between getting ready herself, emceeing the event and her own performance, Onya took the time to speak to me. I expressed that I felt woefully underprepared, and uneducated on their artform. They laughed away my nervousness, and told me to ask whatever I wanted. I asked if colleges and universities were typical hosts of drag shows, Onya replied, “You’d be surprised, it’s more than you think.” Erica Chanel chimed in, “I think schools are trying to be more inclusive and the LGBTQ groups on campus hold events.”

Onya stepped aside to go change her leotard into a neon leopard-printed piece with fierce shoulder pieces. I walked over to her table littered with styrofoam heads and mirrors, and sitting there was a man with luscious long dark hair and a gorgeous black lace puffy-sleeved blouse. We said hello, and Onya said, “Oh let me introduce you, this is my husband,” then directly to him, “She’s writing about us for the paper.” I probably shouldn’t have looked surprised, but Onya must have read my expression as such and noted casually, “You know it’s hard for people who do drag to get married. We’re a really misunderstood community, people think we’re freaks.” She smiled knowingly, and in a cloud of hairspray she was gone, back to the glory of the adoring crowd.

In her absence, Tallulah van Dank and Erica Chanel appeared on either side of me, all smiles and an open willingness to tell me anything I wanted to know. The Queens had a normalcy about them I had not expected. Buoyant and welcoming personalities that radiated kindness, and although several had mentioned coming from homophobic backgrounds, they held nothing back. They were people, fabulous people and stunning entertainers, but people nonetheless.

Photo courtesy of Riley Herriman / Wake Forest PhotoMs. Lolita Chanel is mid-belt during her tear-inspiring reindition of “This is Me” from The Greatest Showman.

The experience backstage was a crash course in Drag lingo. I learned that Tallulah is what is known as an “Afab Queen” meaning that she is a queer cis woman, dressed as a female persona. Talulah’s second act was a medley of songs from Chicago, the mix for which she made herself. In fact, the Queens do everything themselves, from creating mixes to sewing costumes and if they can’t do it themselves, they know someone who can: “We’re our own business and our own brand.” The community is extremely collaborative, with a wide pool of resources and an open willingness to trade skills for skills.

“Are you going back out there sweetie? Because my second act is the sh*t.” It was, in fact, “the sh*t.” In perhaps the most memorable, and emotional performance of the night Ms. Lolita Chanel gave a perfect lip-synch to Rachel Wiley’s “The Fat Joke” poetic monologue, which she followed with a tear-inspiring rendition of Keala Settle’ “This Is Me” from The Greatest Showman. In perhaps one of the most touching moments of the performance, Lolita Chanel’s friend, who I recognized from backstage, strode up to the edge of the catwalk and tipped $5 with a mouthed, “You are beautiful.” It is not an exaggeration when I tell you there was not a dry eye in the house, not even my own.

The last question I asked them was about what impressions or lessons the Queens hope people take away from watching their shows. Here are some of their responses:

“Always don’t judge a book by it’s cover. We’re just here to entertain you, and this is art.” Erica Chanel said.

“Drag is such a celebration. A family. It gives you a community. Being a part of the show you feel like you’re a part of something.” Lolita Chanel said.