Luter Renovations Are Set To Begin In May 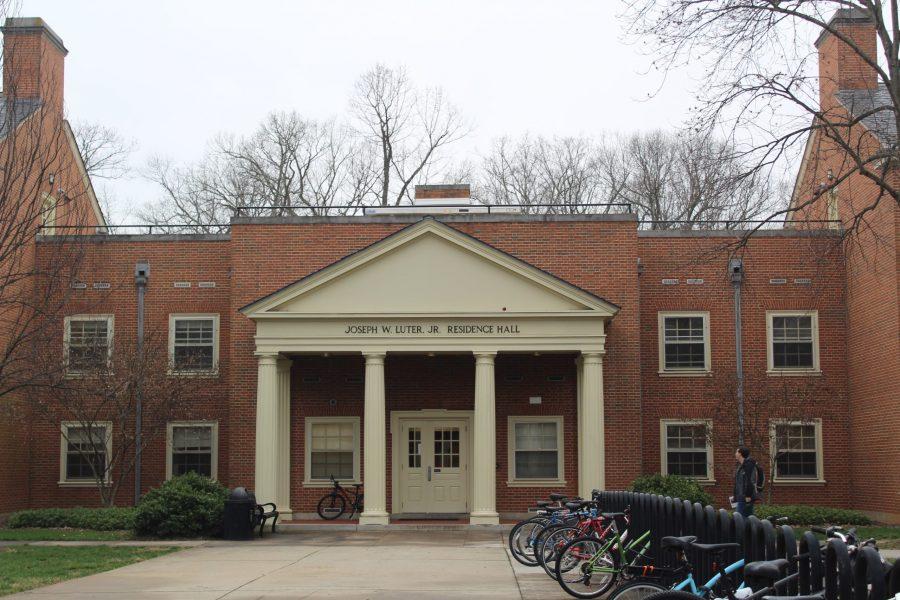 After an assessment of the condition of buildings on campus, Luter Residence Hall has been designated as a high priority action item and will be renovated this summer. Requiring more immediate attention than other residence halls when considering structural and spatial issues, Luter was selected as the first to be renovated, with updates to Bostwick and Johnson Residence Halls postponed until the following two summers.

The $22 million renovation to Luter will begin on May 9 and continue throughout the summer and the fall semester of 2020. Due to the accelerated timeline, staff members and students will have to move out of the hall on May 9, even though the official move-out date for other halls is May 10.

The hall will reopen in the spring semester of 2021 to house upperclassmen returning from study abroad programs. For the fall semester of 2021, Luter will resume its original function as a flexible housing option for incoming first-year and transfer students, as well as continuing students at the university.

Luter, which was built in 1971 and has not been updated since 2016, currently houses mostly freshman and sophomores. It also contains the lounge spaces for two student organizations, Alpha Phi Omega, a national service fraternity, and Wesley Foundation, a Christian campus ministry.

The renovation will resemble those completed during previous summer overhauls of the residence halls on Hearn Plaza and will include new heating, ventilation and air conditioning systems, LED lighting and water-saving features. There will also be updates made according to regulatory codes, focusing on plumbing, electrical and fire systems.

Though some of these improvements may seem routine, many students feel that the updates to the plumbing system are much needed and that they eagerly anticipate the installation of new plumbing lines and infrastructure.

“I think the renovations in Luter are much needed, because there is something definitely up with the plumbing system in this building,” said sophomore Harris Hussain, who lives in Luter.

In fact, problems with plumbing have already caused some parts of Luter to flood this year.

In addition to plumbing improvements, many electrical systems will also be updated and added. The additional electrical units and systems will result in a surplus of equipment for existing utility spaces, so some of the hall’s rooms will be converted into storage units for common electrical systems. However, the loss of housing capacity has been minimized to eight rooms, thanks to strategic planning.

Due to the nature of the renovation, the benefits of renovated rooms and improved facilities and systems far outweigh the costs.

“The building isn’t terrible, but there’s been flooding problems since the first semester,” said sophomore Josh Milon, who currently lives in Luter. “In my opinion, any improvement would be good.”

The upcoming renovation will not only address practical problems arising from old units and systems, but also rooming issues stemming from the outdated arrangement of the rooms. All of the dorms will be renovated in order to improve flexibility and maximize potential space. Though they will maintain the suite-style orientation, the structure of the room and the bathrooms will change.

A primary goal of the updates is to make the inside of the dorm feel more spacious. The ceilings will be raised to increase standing room. Additionally, the built-in furniture will be removed and replaced with movable desks and closets.

The restructuring of the dorm room addresses key complaints from current residents in Luter, who have expressed feelings of overcrowding and frustration with the room’s arrangement. It will allow for more flexibility in the floorplan.

“I think that the renovations to the closets and desks are definitely needed,” sophomore Emily Potts, who lives in Luter, said. “It’s kind of difficult with roommate situations if you’re trying to rearrange the room and make it so that one of you is not having your bed halfway into the closet or one of you doesn’t have your bed pushed up against the desk.”

To address another spatial concern, the orientation of the bathroom doors will be reversed to reduce sensations of feeling closed in while using the bathroom. After the update, the doors will open outward in the direction of the dorm, rather than closing inward on the bathroom.

Aside from the room, social spaces including the lobby and study rooms will also be updated. Likewise, structural concerns with the exterior of the building will be addressed. New roofing and gutters will be installed, areas where the brick is separating from the building will be fixed properly and the landscaping will be refreshed during the renovation.

Upperclassmen especially have noticed the decline of living conditions in Luter and the increasing need for a renovation of the residence hall.

“Having lived in Luter both my freshman year as a student and now as [a resident advisor (RA)], I do believe it’s in need of a renovation,” said junior Kat Pitchford, one of 11 RAs in Luter. “I’m excited to see what Luter will look like and can’t wait to experience the nostalgia of living through two phases of Luter my senior year.”