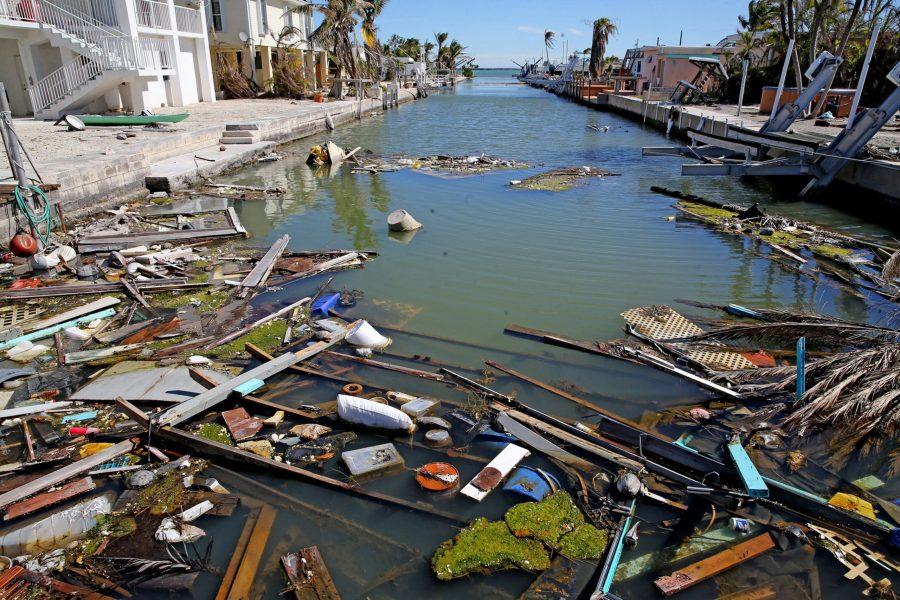 Debris in a canal on Big Pine Key in the Florida Keys, Jan. 18, 2018. The Army Corps of Engineers recently outlined a $3 billion strategy to defend the Keys from future hurricanes and sea level rise. (Charles Trainor Jr./Miami Herald/TNS)

America has seen the writing on the wall. We have seen it repeatedly. It has been pushed to and from the fringe again and again, but it is not going away. Millions of hectares of land have been destroyed by it, land that both people and animals call home.

Human-caused climate change is real, and we are beginning to feel its dangerous effects now. If we want to save lives, we must act now.

If you know about climate change, acknowledge its existence and ideologically support spreading knowledge of it, you are like me.

I am only 21. I know very little of the world; my experience has been slight, and narrow. But I am young, therefore I am the future. The grandiose plan that I am about to lay out is radical, befitting one who is young, passionate and inexperienced.

But I beg you to indulge me. It won’t shatter your world, it may make very little impression on you at all. Opening the mind to change is the first step to enacting change, however incremental, and it all begins with the youth. We have the power to actually change things. We may not be technically responsible for the current state of the Earth, but we live here too, and we will be responsible, sooner than we may think.

We all know that America is big on fossil fuels. As of 2014, we are the second-highest emitter of carbon dioxide from fossil fuel combustion, at 15%. Only China is ahead of us. A significant portion of our emissions are from military spending, which causes 400 trillion British thermal units of energy to be consumed by the U.S. Department of defense as jet fuel alone.

Opening the mind to change is the first step to enacting change, however incremental…””

I propose that a significant portion of this spending be diverted, and that the overall U.S. spending budget be decreased. The current United States military budget is unsustainable.

The question remains: where to divert it? I would assert, transportation.

The truth is that there are too many cars on America’s roads. Perhaps there are even too many roads in America. The industry and the path of America’s development has made cars a necessity. How could any of us possibly give them up?

Justice is the backbone of our modern society. It is just that we do everything in our power to try to prevent even one more death rooted in what we have done to the climate. In every past generation of modernity, there has been an unthinkable horror and a national anxiety that America has had to face: the world wars, the pervading fear of nuclear annihilation, fears of terrorism, etc. Now it is climate change, arguably the most insidious one yet. Like the others, fighting it means fighting ourselves.

So America’s reliance on cars must be reduced. In 2012, the continent of Europe, one of the most densely populated regions of the world, was shown to be the world’s third-biggest polluter. Yet per capita, your average European’s emissions were around eight tonnes per person, almost 40% lower than in North America. This has a fair amount to do with public transportation, such as extensive train and bus systems.

Unfortunately, for this plan to be plausible there would have to be an extensive amount of government intervention and regulation. The industry would be gutted; Ford would roll in his grave. But entirely localizing such an immense transition to state governments or private entities may be too difficult. We need a Green New Deal.

Many of the notions I have raised are grandiose and radical, but they are also vague. As an individual, I am ill-equipped to work out the specifics of a nationwide movement. We need a collective effort to see change through. Will we need another catastrophe to make us work together again?

It all comes back to you. You know now what you must do. You must spread awareness of the imminent danger of climate change and our destruction of the environment, and you must be a daily advocate of change. But before you do any of that, you must conquer your own, individual resistance to change. It will be the hardest fight, but once you have achieved it, you can assist your neighbors.