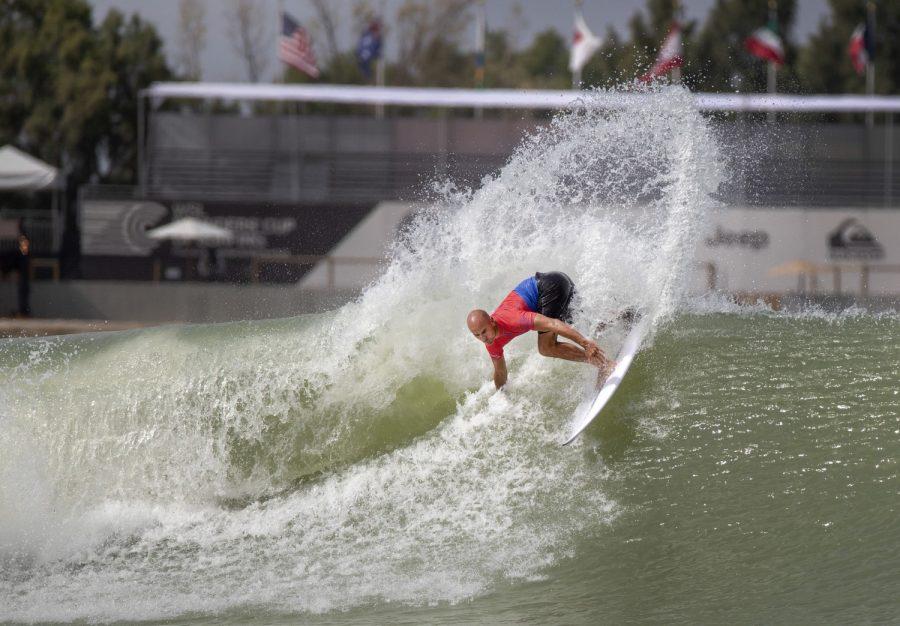 LEMOORE, CALIF. -- FRIDAY, MAY 4, 2018: Team U.S.A. captain Kelly Slater, who is a 11-time WSL Men's Champion, throws spray as he turns off the top of a wave during practice with Team U.S.A. at his Surf Ranch, which is hosting its first World Surfing League competition; The Founder's Cup Saturday and Sunday in Lemoore, Calif., on May 4, 2018. The Founder's Cub is a historic region-versus-region teams event featuring a cross-section of the world's best surfers. This same (or similar) technology may be used in Tokyo for the 2020 Olympics. Kelly Slater (USA), 11-time WSL Men's Champion, will lead the US men's and women's team at the Founders' Cup. Five teams - USA, Brazil, Australia, Europe and World - made up of men's and women's surfers from the elite WSL Championship Tour, will compete over the two-day event at the world-class, man-made wave venue of Surf Ranch in Lemoore, California. The competition will be hosted against a festival backdrop honoring the culture of surfing - food, music, beverage, art and special guests. The Surf Ranch facility, which was revealed online to the public in December 2015, boasts the best man-made wave in history - a 700-yard, high-performance, bi-directional wave featuring barrel sections and maneuver sections. Primarily existing as a testing facility, the Lemoore site has spent the past two years dialing in the technology under the guidance of 11-time WSL Champion Kelly Slater (USA) and feedback from visiting WSL surfers. A private test event last September proved very successful, paving the way for the May Founders' Cup of Surfing to be the first time the public will be allowed onto the grounds. (Allen J. Schaben / Los Angeles Times)

The upcoming 2020 Summer Olympics Games in Tokyo will feature five new sports, bringing the total up to 30. On June 22, 2015, the International Olympic Committee (IOC) announced the inclusion of baseball/softball, karate, skateboarding, sport climbing and surfing.

These changes are a result of new IOC policies that are designed to promote local interest in the games by allowing host countries to propose the additions of popular sports. The Japanese committee took full advantage of these changes, as baseball and karate are among the country’s most popular sports.

Some might be surprised to learn that baseball and softball have not been Olympic sports in 12 years. The 2008 games in Beijing were the last to feature the two before the IOC voted to remove them from the 2012 games in London.

Karate, a martial art native to Japan, will make its first appearance in the Olympics as both a men’s and women’s sport. Karate will have a forms competition as well as a sparring competition. The latter will feature three weight classes for men and women.

Skateboarding will also be making its Olympic debut with two different kinds of competition for men and women. A park competition will feature a course used at recent BMX competitions. The street competition will allow athletes to perform tricks on ramps and rails.

The sport climbing competition will feature three forms of climbing that are typically competed separately. Speed climbing, bouldering and lead climbing will be featured together on one course, increasing the difficulty for climbers.

Surfing will be hosted on Shidashita Beach in Chiba approximately 40 miles from Tokyo. Men and women will compete in heats of four athletes, lasting 20 minutes. Judges will give surfers scores based on their ability to ride the wave.

Other sports have seen additions to their formatting as well. Basketball will feature a half-court 3-on-3 competition, which is set to include teams of four players. Scoring will be changed from the usual variety, as shots outside the three-point arc will count for two, and shots inside for one. Teams will play to 21 points, or until 10 minutes are up.

The IOC has also made gender equality a clear priority for the 2020 games. Archery, judo, shooting, swimming, table tennis, triathlon and track and field are set to add mixed team events. Boxing, canoe/kayak and rowing will add more women’s events as well.