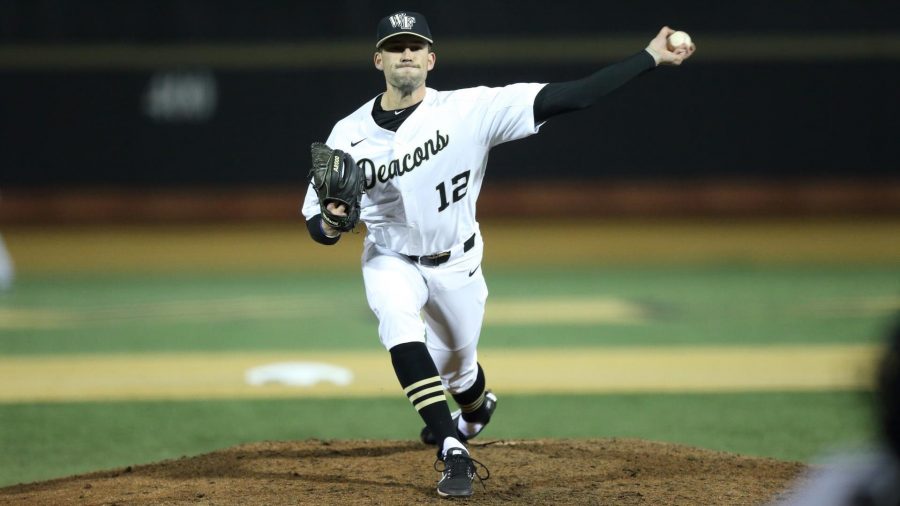 After participating in Senior Day in 2019, Wake Forest Men’s Baseball player Tyler Witt will be able to have that opportunity once again in 2020. A member of the 2018 and 2019 All-ACC Academic Teams, Witt was able to receive a redshirt for the 2017 season to return as a graduate student for the 2020 season.

In the 2019 season, Witt appeared in 27 games and made four starts. He finished with a 4-1 record and 5.37 ERA while striking out 52 batters in 53.2 innings. He peaked at the end of the season, not allowing a run over his final three outings against Clemson. In the ACC Championship against Florida State and NC State, he struck out six while conceding three hits and one walk in 5.2 innings.

The most-used pitcher in 2018, he had a breakout season for the Deacons. Witt appeared in 33 games, making one start and struck out 45 batters in 51.1 innings. As a sophomore, he did not see any game action — hence his ability to gain an extra year as a graduate student this year. Hailing from California, he was ranked a top-500 recruit by recruiting service Perfect Game in high school.

Witt is one of the most prolific success stories to come out of the Wake Forest pitching room in the past few years. His path from his rookie year to a serving as a leader as a fifth-year veteran is nothing short of incredible.

Samantha Wexler: You got off to a great start this season, essentially 4-1 through the first five games. What do you think the team did in the off-season to prepare for this success?

Tyler Witt: Last weekend we hit a bit of a speed bump. It was hard for us to get things going on both sides of the ball. However, we know we are a talented team and we have all the pieces necessary to win a lot of games. In terms of our off-season work, I think we were all focused on our team goals of winning and advancing to the post-season. Everyone put in a lot of quality work and it has shown in some guys early on in the season so far.

SW: What are you most looking forward to as the team looks towards ACC play?

TW: I think we are all looking forward to the consistent, high-level competition of playing in the ACC. It seems like the ACC is pretty stacked this year, so we are all excited about the new challenges each weekend brings us.

SW: What are your goals both personally and as a team this year?

TW: Having a unique opportunity to come back and play at Wake for one more year has left me chasing only one thing, and that is winning.

I am not concerned with personal achievements at this point, all I care about is helping this team win and get to the postseason. That is obviously our main goal of our team as well.

SW: You participated in Senior Day and then came back; what made you decide to do that?

TW: Well, it wasn’t till after the season ended that Coach [Tom Walter] informed me that I had another year of eligibility.

Once the offer was on the table, I began to realize how much of a no-brainer the decision was to come back for one more year. The opportunity to be a Double Deac is one thing, but the opportunity to give it one more shot at taking this team to a regional and beyond was what really sold me.

SW: How do you think your game has changed since arriving at Wake Forest?

TW: Early on as a freshman, I had an idea of the type of pitcher I was supposed to be, but I lacked perhaps the confidence that my abilities and skill would allow me to compete at this level.

I thought the common denominator of success in college baseball was velocity. But, as the years went on, with the help of coaches, I was able to make my delivery and the movement on my fastball unique which has brought me success.

SW: How have the new facilities assisted with the pitching group at Wake Forest?

TW: The strides we have made in developing our pitchers over the past 18 months since opening up the pitching lab have been pretty extraordinary. Aside from improving velocity, I think by blending the data with John Hendricks’ and Evan Wise’s knowledge of pitching, we have been able to see a lot of guys on our staff improve at a remarkable pace.

SW: Coach Walter has led the team to much success. Why do you think he’s so successful at Wake Forest?

TW: Coach Walt works relentlessly to ensure we have the best facilities and coaching staff to help us all develop as athletes. He also believes in the potential of his players and keeps working with guys who have potential but haven’t quite figured that out yet. He also places an emphasis on developing us as young men. I know in my five years here he has taught me many little things about being respectful and being polite that I know will stay with me long after I leave Wake Forest.

SW: What has been your favorite memory at Wake Forest so far?

TW: Wake has been a special place for me. I have constantly been challenged as both a student and an athlete; however, I wouldn’t trade it for anything. This school has taught me a lot about myself and the world and it has also introduced me to some of my best friends.