Hopefuls To Compete For Spot In Steeplechase 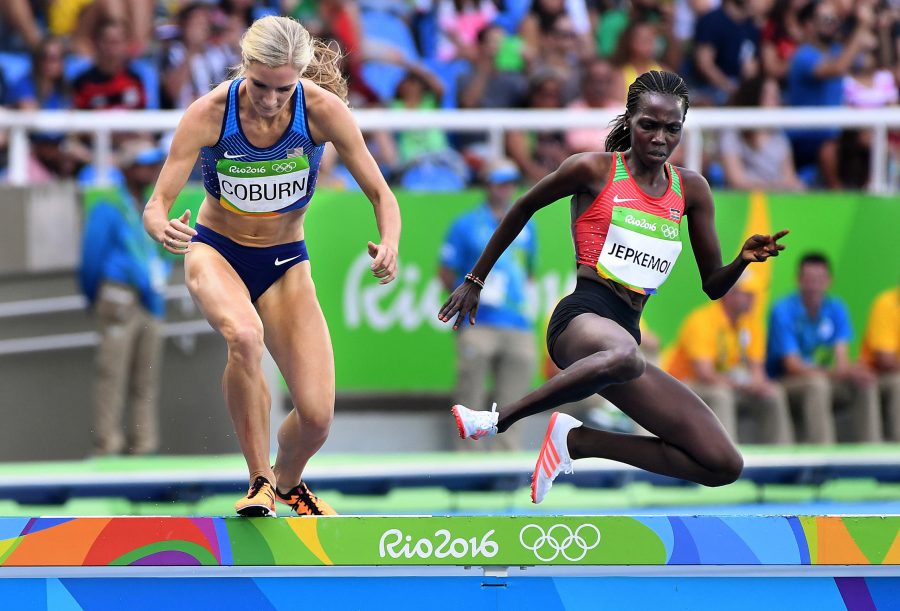 Emma Coburn, left, of the U.S. battles Kenya's Hyvin Kiyeng Jepkemoi for the silver and bronze medal on the last lap of the 3,000-meter steeplechase on Monday, Aug. 15, 2016 at the Rio 2016 Olympics in Brazil. (Wally Skalij/Los Angeles Times/TNS)

I hope the few people who read about running have enjoyed being enlightened about potential contenders for the Tokyo 2020 Summer Olympics. This week’s edition looks at the strangest event there is on the track, in my opinion: the 3,000-meter steeplechase. I personally can not steeplechase for my life, given the combination of jumps, water and a 3,000-meter race on top of it. I find it totally awesome to watch on TV, though, and it is extra awesome when you are watching the best in the world.

For those who are not familiar, the steeplechase is a 3,000-meter race involving 28 barriers and various water jumps throughout. It requires intense fitness, coordination and mental toughness to run almost two miles while navigating over insane terrain. The United States has some of the best steeplechasers in the world, so let’s dive in as to who may be wearing red, white and blue in Japan.

To the surprise of no one, my Boulder bias is going to show through yet again. This one, though, is totally warranted. Emma Coburn, hailing from Colorado and a rock star as a Buffalo at the state university, is the obvious favorite to lead Team USA to Tokyo. In the last Olympics, she took home bronze with a blistering 9:07.63.

Colleen Quigley is another stellar steeplechaser who finished eighth in Rio and will look to make another team.

Courtney Frerichs also took home a respectful 11th in 2016 and she could very well make it again. I honestly see the trio here as one that will likely ship off to Tokyo all together again.

Looking at the IAAF World Championships in Doha, Coburn demonstrated her fitness with a new personal best time of 9:02.35. She placed second in a loaded field and looks to carry that adrenaline with her into Tokyo. As expected, Frerichs was up there with Coburn. She placed sixth overall in a time of 9:11.

Quigley did not run in Doha, but still is focusing on the Steeplechase for Tokyo. This trio could be the most successful of any trio in the track events, so be on the look for them in Tokyo.

The American men absolutely killed it in 2016, with all three representatives finishing in the top three. The squad was led by Evan Jager in second place, running a time of 8:04.28 to finish just behind Kipruto of Kenya. He was joined in the top 10 by Hillary Bor and Donald Cabral in seventh and eighth respectively. All three men wearing red, white and blue finished under 8:30, which is a huge marker in steeplechase land.

Looking at the IAAF World Championships as a litmus test for Tokyo, Bor looks to be in good shape. Bor finished eighth in a time of 8:09, way faster than his time in Rio. Other Americans that looked good in Doha include Stanley Kebenei and Bayer. Evan Jager recently ran really well in a 3,000-meter indoor race, so he looks to be recovered from a bad injury in 2019. Cabral ran well in the 3,000m at USATF Indoors, so he looks to be in the hunt as well. It will be a tight race for the men to see who has what it takes to make it to Tokyo.

The steeplechase is always one of the most fun events to watch on the track given the potential for big falls and huge lead changes. The U.S. is dominant like no other nation in this event, and I’m excited to see who will ultimately represent America in Japan.