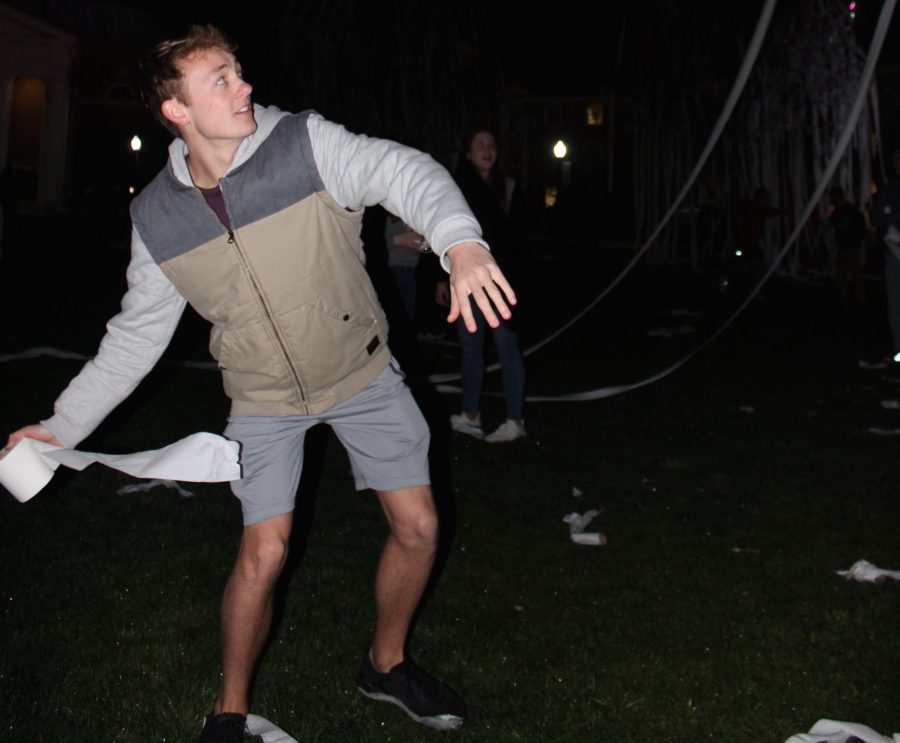 With 75 seconds remaining in regulation on Tuesday night, the seventh ranked Blue Devils held a nine-point lead over the Deacs, and according to ESPN analytics, Duke’s win probability was 98.4%. Students weren’t thinking about storming the court, or covering campus in toilet paper.

The rest was all a dream.

On Jan. 11, when Duke hosted at Cameron Indoor, Wake was clobbered 90-59, leaving the team craving revenge. It was Wake’s first win over Duke in the Danny Manning era, notching this win after 11 straight losses.

The last time Duke lost to an ACC team with a losing record was all the way back in 1988. And the 113 points that Wake Forest scored tied the record for the most ever scored against Duke in Coach Michael Krzyzewski’s career.

“For the total game, they were the team that was deserving of winning, and they did,” Krzyzewski said.

Prior to hitting the shot of the night, Childress, the team’s leading scorer, had only scored one point in the game. He was shooting an abysmal 0-10 from the field.

“I still hadn’t scored,” Childress said. “But my teammates kept telling me — ‘B-Chill, take over the game.’ That shows how much trust they have in me.”

He finished the game with 17.

Junior Olivier Sarr was a dominant force down low, scoring 15 points in the second half en route to a career high 25. He shot an efficient 7-9 from the field, and 11-14 from the free throw line before fouling out at the end of the first overtime.

Junior Chaundee Brown was effective as well, scoring 24 on 8-12 shooting and 7-8 from the stripe. All five starters finished in double figures, as sophomore Isiah Mucius added 16, and freshman Jacobi Neath notched the same total in just his second college start.

Freshman Vernon Carey Jr., Duke’s leading scorer, and Player of the Year candidate, was limited to 10 points and seven rebounds in just 19 minutes of action, fouling out with four minutes left in regulation.

The Blue Devils undoubtedly missed his presence in the game’s most crucial moments.

Duke was led by freshman Wendell Moore and sophomore Tre Jones, who scored 25 and 24 points, respectively.

A lot of this game was played at the free throw line. Duke shot an impressive 31-34, while Wake Forest made a solid 37-50.

Duke committed the most fouls they have committed in a game all year, which led to Wake Forest shooting 50 free throws in a game for the first time since 1982.

“We fouled,” Krzyzewski said. “I’m not blaming the officials.”

Wake Forest led the entire first half, building up to a 12-point lead, but a Jones 3-point jumper at the buzzer tied the game up at 39 heading into the break.

Duke returned the favor, never trailing throughout the entirety of the second half, and also securing a lead no larger than 12.

Wake Forest fought their way back into the game in the final ten minutes of the half, eventually knotting things up with Childress’ clutch shot.

During the 10-1 run to close regulation, the Deacs were able to force turnovers and capitalize off of them. Wake Forest even had a chance to win it at the buzzer, but Childress’ couldn’t get his runner to go.

In the first overtime, Wake Forest was mostly in control, shooting 10-11 from the free throw line. Duke tied it up with six seconds remaining with two free throws by Jones, and the Deacs turned it over before attempting a go ahead shot. Stanley’s halfcourt heave was just short and more bonus basketball was underway.

The Deacs dominated the second overtime period, leading wire to wire, punctuated by a Mucius flush that stretched the lead to 12. Students began to line the aisles in preparation for the first court-storming at the Joel since the John Collins NCAA tournament squad took out Donovan Mitchell and eighth-ranked Louisville back in March of 2017.

The court-storming was just the start of an absolutely electric scene created by the student body and Demon Deacon fans. The quad was thoroughly rolled, and hundreds of students gathered to celebrate.

“It was a moment of school unity and excitement I had never seen before,” said sophomore Henry Parkhurst. “It was an awesome time to be a Deac.”

“The energy was incredible,” said sophomore Becca Dee. “It was chaos. It seemed like every single student and fan showed up to celebrate.”

Manning and the players made a celebrity appearance, and the fans all went quiet to listen:

“This is what makes Wake Forest special,” Manning said. “We appreciate you, we thank you, and we have to continue to love and support each other. Go Deacs!”

“Without your support, we wouldn’t have performed the way we did,” Childress said, echoing the idea. “I would truly appreciate it if we could have all of you guys support us and bring a sold-out crowd for one last game at the Joel for our Senior Night.”

Wake Forest hosts Notre Dame on Saturday in the home finale, where the Deacs will look to build upon this stunning upset and try to improve their seeding for the upcoming ACC tournament.