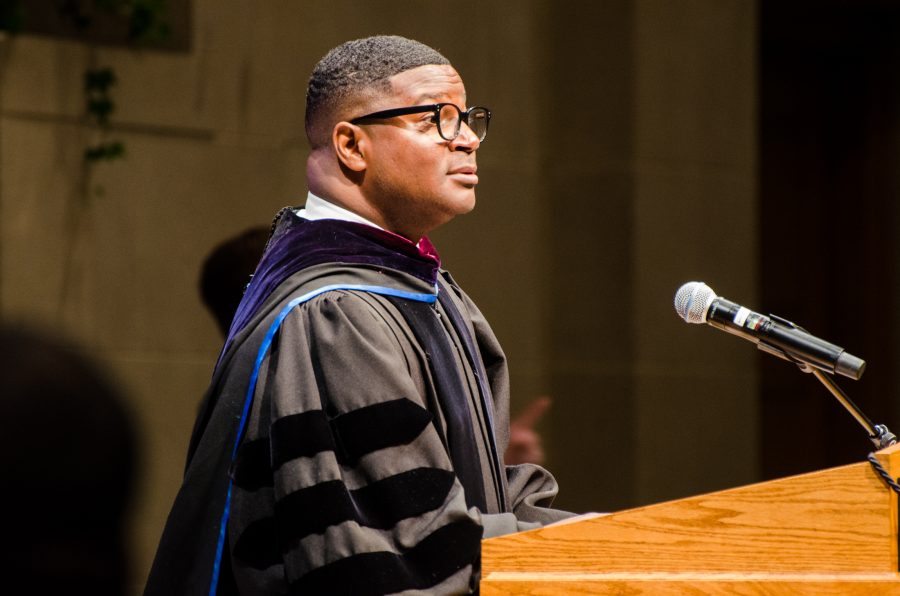 Although it began with the expected fanfare of music, faculty processions and the recognition of Medallion of Merit recipients, this year’s Founders’ Day Convocation, which was held on Feb. 20, included several changes to the program. Most importantly, President Nathan Hatch acknowledged and apologized for the university’s connection to slavery and racism.

In his remarks, he recognized that the university was founded on a slave plantation in 1834. He also explained that the university’s founder, all of the antebellum presidents, many former trustees and early students had participated in the slave economy of the South. Further, he acknowledged the involuntary sale of 16 enslaved individuals for the financial benefit of the university.

“I apologize for the exploitation and use of enslaved people — both those known and unknown — who helped create and build this university through no choice of their own,” Hatch said. “I apologize that our founders did not recognize and support the humanity and intrinsic value of those they enslaved. And I profoundly regret that subsequent generations of this university did not affirm the humanity of the enslaved individuals who made our existence possible.”

Hatch explained that, though there is never a perfect time to address the wrongs committed by the university in the past and some think his apology has come too late, he believes that the message is necessary. Moreover, he recognized that an apology does not function as a solution for the current issues taking place on campus and that it must be followed by meaningful action taken by the university.

Some recent action on this issue includes the university’s membership in the Universities Studying Slavery Consortium, which began in 2017, the establishment of both the President’s Commission on Race, Equity and Community and the Slavery, Race and Memory Project in 2019 and an event in May 2019 to remember the sale of enslaved individuals for the university’s endowment in 1860.

“Through the Slavery, Race and Memory Project over the last few terms, we have focused on efforts for uncovering more of our past, in hopes that we will do right by our future,” José Villalba, the vice president of Diversity and Inclusion and chief diversity officer, said. “A more inclusive future  — and a more equitable community — is more likely if we understand what happened in our past and why.”

Villalba’s focus on the importance of university efforts to understand the past in order to move forward were emphasized in Hatch’s statement.

“Acknowledging past wrongs and taking responsibility are only the start of repairing damage and pursuing healing,” Hatch said. “A true apology requires action and incorporating meaningful change.”

The sentiment of using the apology as a jumping point was shared by many, including T. H. M. Gellar-Goad, associate professor of classics and member of Wake Forward, an organization composed of faculty and staff who are committed to the improvement of the university.

“The apology at Founders’ Day is an important step, but the apology requires action as well as words,” Gellar-Goad said. “And it remains to be seen whether the university will live up to the moral obligation of fighting racism and fostering equity.”

During Hatch’s remarks, activists had organized to stand in remembrance of the slaves sold for the university’s endowment. With the help of other students, senior Alexander Holt also shared the plan with Wake Forward via email.

“We, as students, would welcome the support of faculty as we stand in remembrance of those lives deemed expendable for the furthering of Wake Forest’s advancement,” Holt said in the email.

The activists in attendance were clad in black to show solidarity with those who have been affected and are affected by the racial legacy of the university. Five students and several other staff members stood up about a minute after Hatch began his speech. By the end of Hatch’s speech, most of the audience was on their feet.

As the event continued, the theme of diversity was emphasized by a variety of speakers and performances which had not been included in previous years.

Freshman Mahlea Hunt, a member of the Lumbee Tribe of North Carolina, performed “Amazing Grace” in both the Siouan indigenous language and English.

Following the theme of moving forward established by Hatch, senior Celia Zhou delivered an oration titled “Living and Loving the Question,” which described her cultivation of personal identity. As an American-born Chinese student and native North Carolinian, Zhou explained that she overcame racial prejudice, which often appeared in the question about where she is “from from,” through self-reflection on her values and motivations.

“I tried to detach myself from the stereotypes that people associated with me,” Zhou said. “The glass ceiling that I perceived to be my ethnicity dematerialized.”

Touching on a similar subject was the keynote speaker, Jonathan Walton, the dean of the School of Divinity and an advocate for social justice and civil rights.

Walton expanded the argument that Hatch began about the importance of the past. Citing examples of how the Bible has been misquoted throughout history to serve the needs of individuals, Walton explained that people can become misguided by accepting phrases and traditions as reality.

“To live honestly in the present and responsibly for the future is to wrestle with one’s past,” Walton said. “Forgetting the past is not emancipation. It is amnesia.”

“We are the beneficiaries of that vision,” Walton said. “We aim to extend this legacy of inclusion and acceptance.”

Yet, Walton stressed that the darker moments of the university’s institutional history must not be forgotten in light of successes like these. He explained that denying the university’s historical connection to slavery would only inhibit the potential to move forward with courage and candor.

“A reality built on a lie may appear successful, but mendacity has a deficient foundation,” Walton said. “Only truth will liberate us from the demons of our past.”

To commemorate the history of the university, Hatch also continued the tradition of awarding the Medallion of Merit to two influential university trustees, Larry Hopkins and Lou Bissette.

Hopkins, the first African American to graduate from the university with a chemistry degree in 1972 and a graduate of the university’s medical school in 1977, became a well-respected physician dedicated to serving the Winston-Salem community and the university. Bissette, a graduate of the class of 1965 and now an attorney and public servant, was recognized for transforming Asheville into a vibrant hub of economic and social activity and for dedicating his time to the improvement of higher education in North Carolina.

The evening concluded with a musical performance from School of Divinity students who sang “Hold On,” reminding the community that they can overcome the hardships of the past.

While the solution will not be as simple as uniting voices in harmony or issuing an apology,  many students, faculty and staff recognized that the convocation was an important part of a larger conversation and call to action that will continue.

Student Government President Mellie Mesfin, who is a member of the President’s Commission on Race, Equity and Community, considered Hatch’s apology as only one important step in the context of more work that remains for the commission and the university.

“I appreciated that President Hatch’s remarks acknowledged and unequivocally apologized for the enslavement of people for the university’s benefit,” Mesfin said. “That being said, what comes next is even more important. Wake [Forest] must back up the words with action, because that’s the only way to meaningfully make the community a space where all its members can thrive.”

Expressing a similar sentiment, the Anti-Racism Coalition (ARC) published a tweet with the hashtag “what happens now,” asking students to share what they stand for and to join them in considering what the administration will do to produce tangible results that will begin to make amends for the institution’s racially fraught history.

“We stood to honor those who lost their lives and liberty so Wake Forest University could exist today,” ARC tweeted. “We now ask #whathappensnow?”