Stormwater Drainage Has An Impact On Campus 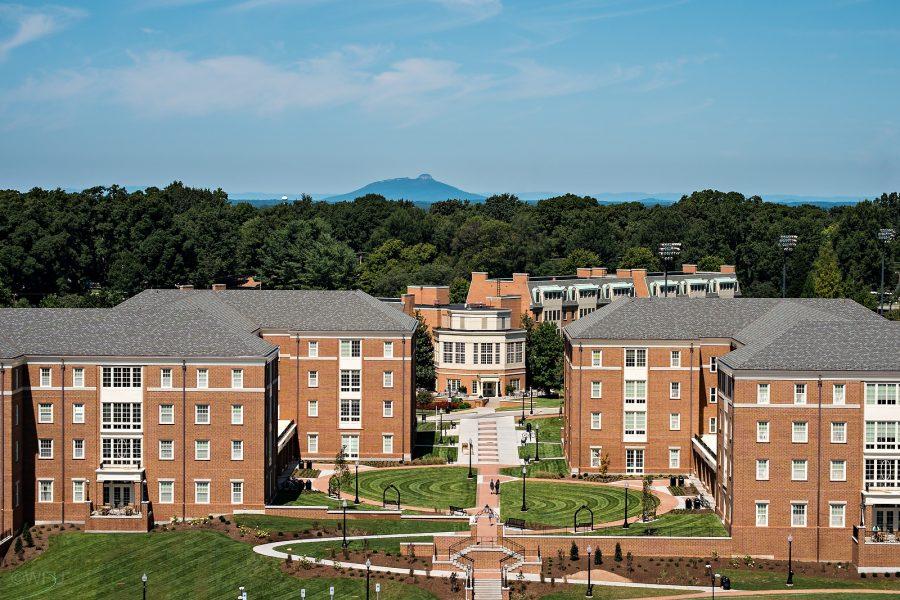 With springtime on the horizon, Winston-Salem looks forward to the warmer weather and longer days, but with that warmer weather comes a consequence ––the upcoming months bring some of the highest levels of precipitation in the year.

It doesn’t take much rain before the walk from Johnson Residence Hall to the Pit becomes more of an oceanic voyage, but why is the university so puddle prone? And where does all that water end up?

In 2017, Hurricane Harvey overwhelmed the city of Houston, Texas resulting in massive flooding throughout the city. As the waters cleared, environmental scientists and civil engineers took the opportunity to highlight the consequences of a city that paves over most of its wetlands, green space and other natural drainage sites.

Similarly, concrete is a factor at the university, but the campus’s drainage problems extend below the pavement.

According to soil surveys published jointly by the U.S. and North Carolina Departments of Agriculture, the land under Winston-Salem is mostly composed of Cecil soil. This family of soils generally consists of 6 to 8 inches of dark, sandy soil which sits on top of a thick layer of red clay.

In a report dating back to 1919, the soil’s drainage is described as “excellent, even excessive.” Years later, the 1976 soil report states that many areas were losing their soil due to erosion. It advises that “practices are needed that control runoff and erosion.”

You may notice though, if you look down after a heavy rain, that there doesn’t appear to be much soil running. Instead, sidewalks are painted with a red clay mud. Much of the already thin topsoil has been eroded, exposing the red clay beneath which is even worse at retaining water.

Combine this with the topography of the area, and the puddles make perfect sense. Campus exists on a strip of flat land sandwiched between a ridge to our North and Silas Creek to the South. This means that water drains down from Polo Road onto campus where it gathers atop a mixture of clay and concrete until it makes its way down the watershed into Silas Creek.

Since construction began on the Reynolda Campus in the 1950s, campus architects have tried to minimize the impact that this water has on students and university operations.

It was not until the late 2000s that updates to state and county building codes highlighted the fact that many drainage systems had not alleviated water problems, but instead they had shifted the negative impacts to our local water systems.

For the June 2009 update to the Campus Master Plan, the environmental consulting firm Biohabitats conducted an extensive review of the university’s ecological impact on its surrounding areas. At the time, according to the plan’s appendix, “no stormwater management facilities are present on campus, which is generally consistent with the accepted practices at the time of construction of most of the campus.”

Michael Draughn, director of Maintenance and Facilities, echoed this while discussing conversation regarding the university’s environmental impact.

“What they built in the 50s, by today’s standards, would certainly not be adequate. At the time, it’s the way things were built,” he said.

As a result, the report says that areas downstream of campus been heavily impacted by stormwater runoff.

Notably, Lake Katherine was once a prominent feature of the R.J. Reynolds estate. As local development began to increase in the 1950s, sediment deposits began to flow in and fill the lake, causing it to shrivel over the decades. Today, all that remains of the lake are the marshy wetlands between Reynolda Village and the running trails.

The 2009 report also states that, at the time, Silas Creek displayed a “very unstable geometry and degraded aquatic habitat.” This also had an impact on the water quality. Further downstream, Muddy Creek, which Silas Creek flows into, had been designated as an impaired body of water under the Clean Water Act “due to levels of turbidity [opaqueness] and fecal coliform.”

The U.S. Environmental Protection Agency’s website also states that, as of 2012, both Silas Creek and Muddy Creek were flagged as polluted due to the detection of mercury in fish tissue.

Of course, the university is not solely responsible for the impact of an entire watershed. These issues result from a general lack of stormwater infrastructure throughout the region. This prompted a revision of state and Forsyth County building codes during the 2000’s which, in turn, encouraged the university to take a closer look at its impacts.

“Did we cause all that? No. Were we a contributor to that? Absolutely,” Draughn said. “We’ve done a lot since then to correct that.”

The 2009 report reflected this by providing a list of potential actions to lessen the campus’s ecological impact, many of which the university has begun to implement over the past decade.

Improvements recommended by the report include a variety of green engineering practices such as introducing porous pavements to limit drainage needs, rain gardens to slow down and retain water and cisterns to prevent the existing drainage system from flowing directly into water systems.

Prior to the report, the drainage system routed stormwater directly to its endpoints near Lake Katherine. This meant that water was allowed to flow at high velocities and contribute to erosion within Silas Creek.

During the construction of Porter B. Byrum Welcome Center, two cisterns were installed beneath the parking lot which allow for the collection and then slow release of stormwater. Similarly, a tiered pond was built behind Angelou Residence Hall to act as a regional sink for the western side of campus where water can naturally collect, deposit sediment and slowly filter its way downstream.

Also, beginning in 2012, the university began to use specialized StormPave bricks in areas of new construction. These bricks, which make up the Farrell Hall patio and walkways between Dogwood and Magnolia Residence Halls, are designed to allow water to sink through them and into the ground, simultaneously lessening puddles as well as the negative effects of runoff.

Retrofitting older portions of campus, however, has proved more difficult than incorporating these practices into new construction. Draughn hypothesized that the same bricks could replace the existing ones surrounding Hearn Plaza, but construction of that magnitude would take time and money. Instead, last summer, Hearn Plaza was renovated in an attempt to eliminate rainwater buildup, but the results have not shown any drastic differences.

“Mud used to pond significantly in the middle of the grass,” explained Infrastructure Engineer Tony Schallert, “So, they installed a crown to combat that, but now water runs to the edge.”

“You could probably call it a mixed level of success,” added Draughn, “Its improved, but it isn’t fixed.”

The project’s goal was to add more soil which would increase drainage and allow for more water to be absorbed, but instead it highlights the difficulty of retrofitting such long-standing construction with newer green engineering solutions. More realistically, a mixture of traditional drainage practice will need to be combined with green solutions to achieve the desired effect.

“Ideally you’d rather the soil absorb the water, because once it enters a drain, it is true stormwater.” Draughn said. “But for those areas where you truly don’t have absorbance abilities, we added three or four new drains last year and I’m sure we’ll add three or four more new ones this year.”

As for new construction in the university’s future, building codes now require for each square foot of new impervious surface to be offset by a proportional amount of stormwater infrastructure to balance out the effect. Both Draughn and Schallert say that, since the updates to county building codes and the Campus Master Plan, each construction project beginning with South has gone beyond the new stormwater requirements in an attempt to minimize ecological impacts.

This includes the fact that a large collection area was built beneath Water Tower Field, which functionally acts as an extra cistern. There is also a current project to begin using some captured rainwater from the sports performance region of campus to power the nearby cooling facility, which would lessen the amount of water imported to campus.

Campus will still experience drainage issues, particularly in older portions of campus where retrofit projects don’t always succeed, and progress will still be limited by a practical mixture of money, code requirements and ingenuity.

“Almost all our infrastructure is better today than 10 years ago. Our stormwater is cleaner and more managed because, whether it’s about new parking or existing buildings, it’s a part of every discussion we have here,” Draughn said.