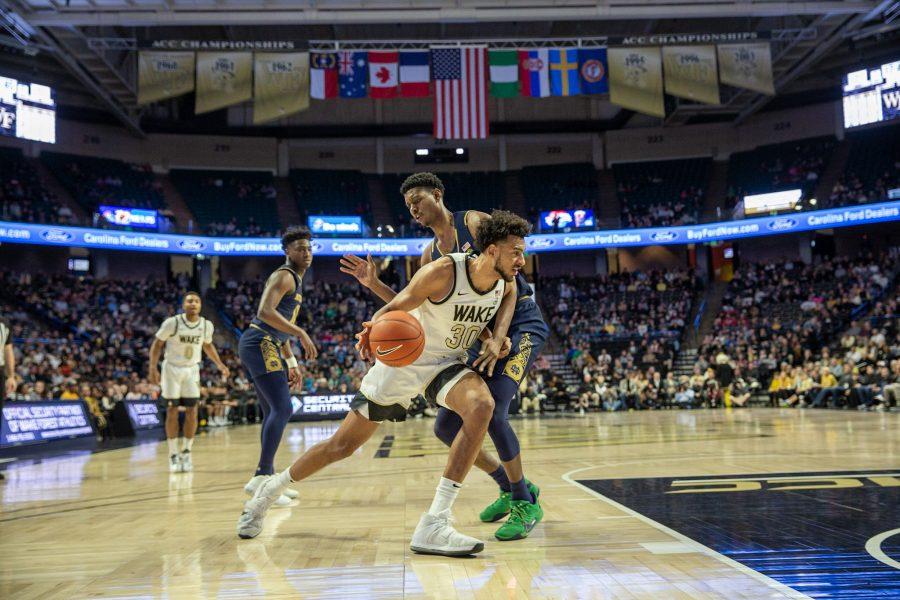 In 32 minutes, the French big man shot 12-16 from the field, displaying a plethora of post moves with his back to the basket. Notre Dame tried different matchups, double teams, and even a zone, but couldn’t figure out how to stop him.

“Give them credit, we had no answers for the big fella tonight,” said Notre Dame Head Coach Mike Brey. “We don’t have any answers for him, and I guess we better figure something out in case we see him again in Greensboro.”

“We just kept feeding him,” said junior Chaundee Brown. “He’s been putting in the work, so it doesn’t surprise me. I feel like he could do that all the time.”

Sarr certainly has brought his A-game to Notre Dame the last few meetings. When the two squads faced off earlier this season in South Bend, the big man scored 18 in the 90-80 loss. His sophomore year, he scored a season high 14 against the Irish in Wake Forest’s only road win in ACC play.

“If I need to put some glasses on him, and make it look like the other team is wearing Notre Dame uniforms every game from now on, we’ll do that,” joked Wake Forest Head Coach Danny Manning following the game.

“We had a treat today to see two of the best big men in the league go head-to-head,” Manning said. “For me, as a big guy, I really enjoy watching those guys play.”

Wake Forest lead 41-30 at the half, building up a lead as large as 16. The Fighting Irish were able to capitalize off of a slow Wake Forest start to the second half, battling back and taking the lead with under seven minutes to go. The Deacs shot the ball well from the line down the stripe and were able to pull away at the end, going on a 10-0 run that broke open a two point game with three and a half minutes remaining.

Senior Brandon Childress had a solid last game in the Joel, scoring 14 to go along with six assists. With four seconds remaining, he was subbed out of the game to a roaring standing ovation from the Wake Forest fans.

Childress was embraced by Manning and his teammates as he exited the floor, before sharing a special moment with his father, Wake Forest assistant coach and basketball legend Randolph Childress. The two were visibly emotional, sharing a hug for close to a minute.

“He’s made so many sacrifices for me, my brother, this family,” Childress said, “People take for granted how great of a guy he is off of the court. Our relationship is unbreakable. It’s a bond that can’t be broken.”

The senior point guard grew up around Wake Forest basketball, and has experienced quite the four years as a player. After making the NCAA tournament his freshman year, three straight losing seasons have demanded a lot out of him. However, he should be proud of the way his last couple of games in front of the home crowd went, surely being a key player in the upset of Duke as well as in the Senior Night win.

“I couldn’t write a better chapter than this, in terms of how to end my last few games at the Joel,” Childress said.

Riding the momentum from the incredible win over the Blue Devils last week, the Deacs were able to string together back to back ACC wins for the first time since John Collins was still donning the Old Gold and Black.

Also recognized on Senior Night were graduate transfers Torry Johnson and Andrien White. Johnson, who injured his leg at the end of the Duke game, checked in to play the final four seconds to step out onto the home court one last time. White scored seven in his last game of his only season as a Demon Deacon.

Wake Forest’s brief win streak was snapped Tuesday night in Chapel Hill, as North Carolina was able to win on their own Senior Night, 93-83. If the Deacs were able to pull this one out, it would’ve been their first season sweep over the Tar Heels since 2002-2003.

On Feb. 11, Wake Forest took down Carolina with ease at the Joel, 74-57. The Tar Heels have been playing their best ball of 2020 as of late, with this win being their third straight.The Demon Deacons were able to put together an impressive offensive performance, led by Childress’ 24 points and nine assists. Sarr, sophomore Isaiah Mucius and freshman Jahcobi Neath all finished in double figures.

UNC was carried by freshman guard Cole Anthony and junior forward Garrison Brooks. Anthony scored 28 points to pair with seven assists, while Brooks put up 25 and hauled in seven rebounds.

While this season has had some good moments, the road woes in a down year for the ACC are very concerning. The Deacs haven’t won an ACC road game since they took down last place Pitt back on Jan. 4. Wake Forest will look to improve their ACC tournament seeding in their regular season finale against NC State on Friday.