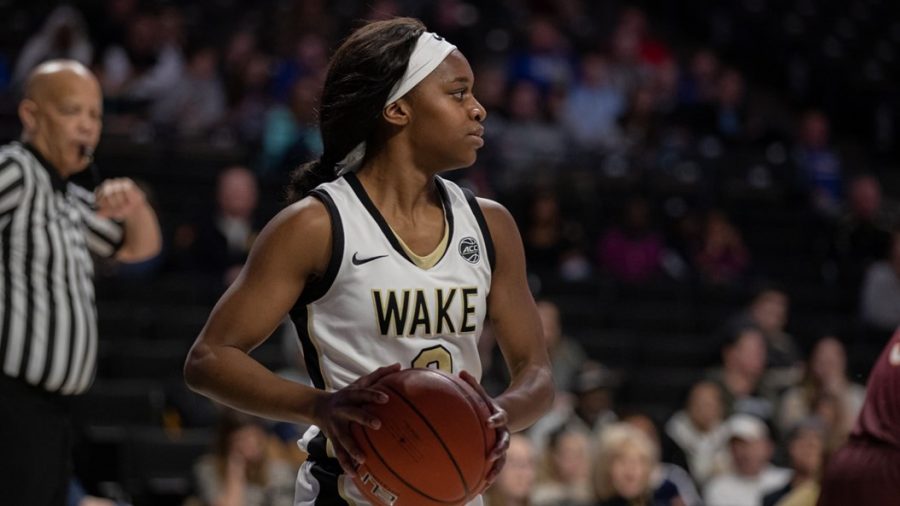 As the lights went out after Senior Night on Feb. 27 at the LJVM Coliseum, another basketball season was in the books for the ladies of Demon Deacons Basketball.

Led by Wake Forest alum Jen Hoover, the Deacons have had one of their best years to date.

Wake Forest finishes the regular season tied for the second-most ACC wins in school history with seven, only behind the 1988 season, when the team made their single NCAA Tournament appearance and advanced to the second round before falling to top-ranked Tennessee. Hoover was a part of that 1988 squad.

The season saw many milestones, including senior Alex Sharp and junior Ivana Raca both reaching the historic 1,000-point marker at different points throughout the season. Sharp accomplished this feat in the game on Jan. 30 at Pittsburgh, while Raca was able to grab it in the regular season finale against Miami.

The Deacon offense was led by Raca, who put up 16.8 points per game and set a new career high against Florida State on Jan. 23, when she put up 27. She also set a new career high in rebounds, recording 12 against Georgia Tech on Jan. 5. Sharp was the second-highest scorer for Wake Forest, averaging 12.3 points-per-game. She grabbed a new career high in steals with four at Clemson on Feb. 13 and free throws made with eight on Feb. 6 against Notre Dame.

Junior Gina Conti led the team in assists and also contributed an average of 10.3 points-per-game. She moved into eighth place on Wake Forest’s all-time assist list on Jan. 30 at Pittsburgh as well. When the team needed a spark, it was Conti who was able to ice the game for the Deacons in two huge matchups this season. At Duke on Jan. 2, she hit the game-winning jump shot with 1.8 seconds left to give the Deacons their first win against Blue Devils in Durham since 1993. Then, against another Big Four opponent in North Carolina on Feb. 23, she hit the game-tying three-pointer with three seconds remaining to push the game into overtime.

The LJVM Coliseum was a bright spot for the Demon Deacons, racking up a record of 9-5 while playing in the friendly confines. The team struggled while on the road, eventually leading to them falling in the ACC rankings. While they boasted a favorable record in neutral-site games (2-0) and at home, the Deacons finished just 3-9 on the road.

With a Demon Deacon alum in Hoover in the driver seat for the program and four of five starters returning for next season, the women’s basketball team has a bright future ahead. For now, all eyes are on the ACC Tournament in Greensboro that begins on March 4 with a rematch against in-state rival Carolina. The Deacons last beat Carolina in overtime and it looks to be a great game between the No. 13 Demon Deacons and No. 12 Tar Heels.

The top seed in the tournament is Louisville, followed by NC State, Duke and Florida State respectively. If the Deacons were able to beat Carolina, they’d next match up with No. 5 Virginia Tech. Their side of the bracket then continues on with No. 4 Florida State, followed by No. 1 Louisville in the quarters. Hopefully, the tournament in Greensboro allows for a home court advantage of sorts.