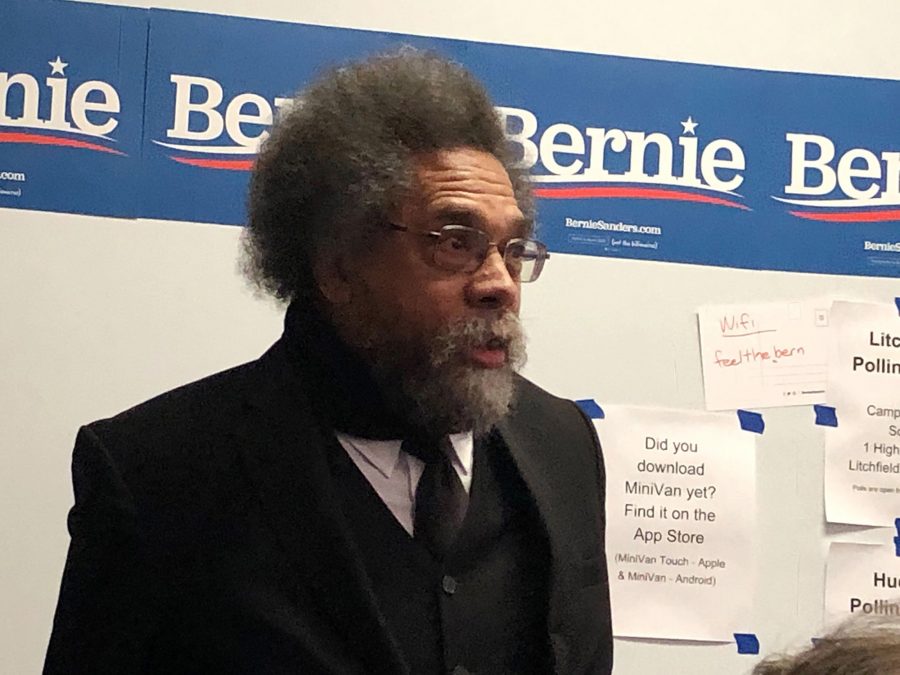 Bernie Sanders campaign co-chair and longtime racial justice scholar Cornel West shows up at the Nashua, N.H., area Sanders field office where some 50 volunteers were preparing to go knock on doors. He launched into a riff that zagged from motivational to angry to defiant in the space of 12 minutes. It was the first of several such stops he would make on February 11, 2020. (Evan Halper/Los Angeles Times/TNS)

Although I’ve thoroughly enjoyed Black History Month’s presence on social media (particularly Black Twitter) in the forms of funny memes and informative posts that shared little-known Black History facts (that I would of course fact check), I’m still seething with anger for how Black history is treated in the first 12 years of education, and out of the longer 11 other months by wider society.

Most, if not all educational curriculums hardly include any Black history other than the period of slavery and Jim Crow, and even those aspects of history are only taught on a surface level. If you were to ask grade school children about Black history, they’ll name some of the same names with the same basic facts. They’ll name Rosa Parks, Martin Luther King and maybe they’ll mention Frederick Douglass or Harriet Tubman. Other than that, they more than likely wouldn’t be able to tell you sh*t.

The kids more than likely would have general awareness of who Shakespeare was, but wouldn’t know Alexandre Dumas, the Black writer of The Three Musketeers (or any acclaimed Black creative really). They might know Muhammad Ali was a boxer, but wouldn’t be able to tell you the political contributions that he made. They wouldn’t know sh*t about the Black Panther Party and Black Liberation Movement, both of which fueled government conspiratorial killings of several Black leaders. They wouldn’t know about Malcolm X or any Black Nationalists that demonstrated fierce Black pride and advocated for protection from corrupt and violent law enforcement officials.

They wouldn’t know about Black Wall Street, an affluent and prosperous Black community that was burned down entirely by a White mob who were envious of their wealth. They wouldn’t know that other developed Black communities were also burned down by angry White people, aggressively gentrified, or unjustly confiscated by the state government. They wouldn’t know that there is a section in the 13th amendment that upholds slavery in the context of imprisonment, which catalyzed mass incarceration of Black people immediately following the abolishment of slavery that’s permeated through the 20th and 21st century. They wouldn’t know about redlining, a practice that deliberately hindered Black people from buying housing and accumulating generational wealth.

They definitely wouldn’t know about pre-slavery Black history, like a Black man named Mansa Mussa being the richest man in recorded history, or the intricate, advanced societies all over Africa before colonialism. I could go on, but the editor would be pretty upset by how far I’d surpass my 750 word limit.

The lack of knowledge encourages the current lack of empathy for the ways in which Black people are treated unjustly in the present-day. Many racist stereotypes in regard to Black people in terms of poverty, education or incarceration rates are grossly misinformed about how these things came to be. Furthermore, the lack of Black history being taught influences the lack of acknowledgement of Black history outside of schools. White Tusla residents were outraged by an initiative to teach about the Tulsa massacre of Blacks, saying that it was just the past and to leave it alone. White southerners share similar sentiments when Confederate statues are taken down, arguing that it’s for “southern pride,” even though the confederacy was primarily and specifically built to uphold the institution of slavery.

People would look at someone who didn’t know about the Holocaust or 9/11 like they were crazy, so why is it not bothersome to people about the huge holes in Black history? Why is White history expected to be common knowledge, but Black history is just for fun trivia to share during the month of February?

Black people have such as rich history in the arts, sports, politics, economics and social movements. Black history is as integral to American history as the signing of the Constitution, Declaration of Independence, Revolutionary War and all other huge events I’m expected to be familiar with. Therefore, it should be treated as such.