Beijing Opera Comes To The University 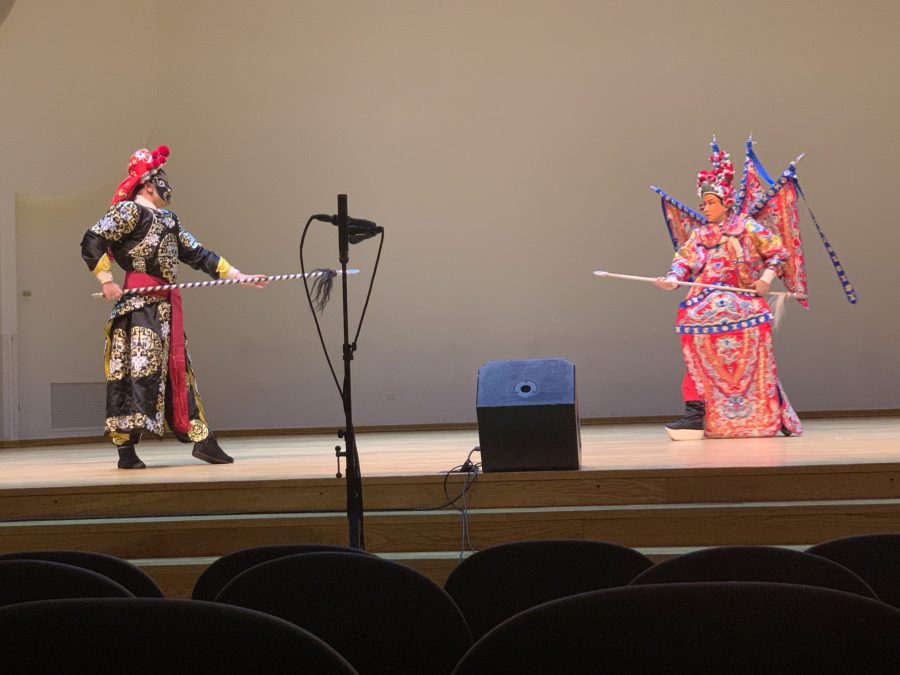 Last weekend, visiting actors treated students to a look into traditional Chinese culture with a performance of Beijing Opera in its first ever full appearance in Winston-Salem. The Opera, Jīngjù in Chinese is a stylized form of different arts including works of literature, movement, music and singing that has been around for over 200 years. It encompasses four main roles, Shēng or elder bearded male,‭ ‬Dàn or female, ‮*‬Jīng or male with painted face and distinguished features and‭ ‬‮‬Chōu or male clown, into folktales featuring distinctive high-pitched dialogue and singing as well as action scenes. The main female role, is the most interesting. It has a long history of being filled by men because women weren’t allowed to work in the art for generations after its origin. This history was also highlighted in the popular 1993 film Farewell My Concubine. The group visited from the Confucius Institute of Chinese Opera at Binghamton University in New York.

Before the Saturday performance, guests had the opportunity to attend a workshop lecture on the opera and ask questions in a session led by Chenfu Zhu, a lecturer and performer. She offered details regarding an opera’s format and her own experience with the art form. Zhu started learning opera when she was 12 and eventually graduated from the National Academy of Chinese Theatre Arts in Beijing. In answering questions about her life, she said that she likes that Beijing Opera is an abstract art and performance style. The singing incorporates beautiful melodies and saidshe enjoys the challenge of learning the complicated tempos. The highlight of the workshop was the early chance to see actors sing and perform scenes. The audience, with ages ranging from elementary schoolers to professors seemed to thoroughly enjoy the event, with many of the kids happily learning how to do moves at the end of it. It takes tremendous skill and hard work to master Beijing Opera, with slower learners requiring up to three years of training before they are able to perform on stage.

Pictured above is a training session where the performers demonstrate the weapons to volunteers.Photo courtesy of Prof. Liu / Wake Forest University

The performance itself was stunning to see. It featured three portions: the operatic scenes, a performance of two songs from a Bamboo Flutist, and five scenes of different fights, movements and songs. While on stage, the actors shine brightly with their shining helmets, costumes and face paint. Seeing the complicated choreography of the fight scenes can only draw thoughts about how hard it must be to learn the artform. The actors, Boer Li, Chenshuang Li, Yunjing Li and Chenfu Zhu all had equal moments to show off their extraordinary singing and movement skills. The Bamboo Flute pieces performed by Heren Cao provided a nice break in the action for soothing traditional tunes. With her two songs, she exhbited jaw-dropping breath control and difficult note transitions. In the following  act, Hong Zhang showed off her mezzo-soprano skills in two songs that only someone with her training could have been able to do. As an overall entertainment experience, this event was unlike many others and stands out visually and sonically in every way.

Aside from the performances and workshops, what also stood out was the passionate comradery and friendliness of the visiting actors. Before each event, one of the actors presented a welcoming speech to the audience thanking them for allowing their performance and also congratulating the university on their win over the Duke Blue Devils in men’s basketball a comment that drew many laughs and cheers. During the performance, the audience was also encouraged to engage with the play in as traditional of a manner as possible. Whenever actors completed an impressive set of moves or posed for a short period of time, it was expected that the crowd cheered loudly with exclamations saying “Bravo!” The event also ended with a combined shout in Chinese and English in support of the efforts to stop the coronavirus, led by the actors. The Beijing Opera succeeded in bringing people together to learn more about Chinese culture in the midst of great professional work and enthusiastic visitors.