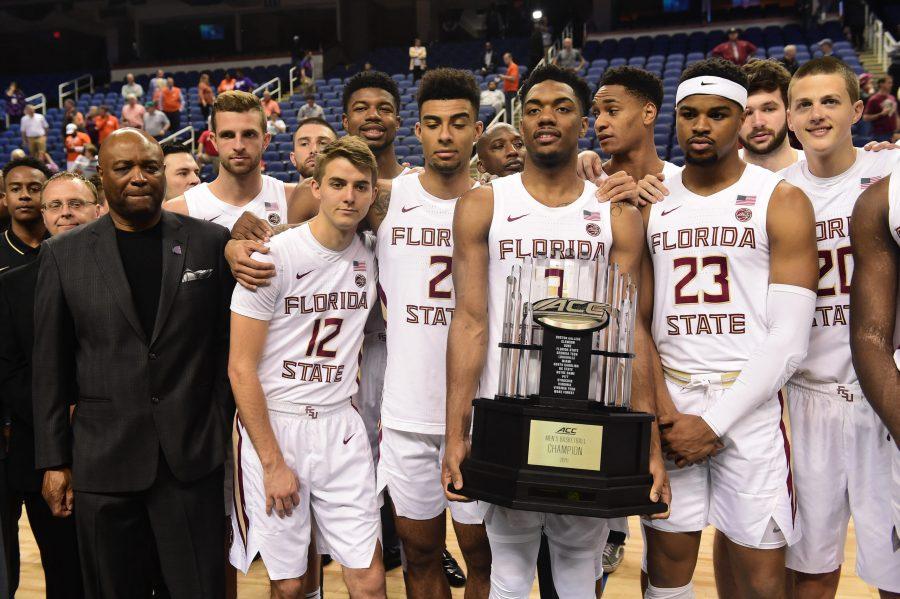 GREENSBORO, NORTH CAROLINA - MARCH 12: The Florida State Seminoles, lead by Head coach Leonard Hamilton (L), are presented with the regular season trophy following the cancelation of the remainder of the 2020 Men's ACC Basketball Tournament at Greensboro Coliseum on March 12, 2020 in Greensboro, North Carolina. The cancelation is due to concerns over the possible spread of the Coronavirus (COVID-19). (Jared C. Tilton/Getty Images/TNS)

It was the best of times, it was the worst of times. Shoes squeaked and crowds roared on Tuesday as the Atlantic Coast Conference Basketball Tournament began with a matchup between the Wake Forest Demon Deacons and the Pittsburgh Panthers. The hottest topic in the news was the vicious virus, COVID-19, that was encapsulating the globe and cancelling study abroad semesters everywhere, but it had not hit home, not yet at least. Babies were crawling on the floor in contests and fans were making comments about how absurd it was that there was even a mention of a cancellation. This was the ACC Tournament in Greensboro — it was almost untouchable.

Two days came and went with action-packed basketball games. I was a volunteer for the ACC Media Operations and got to watch games, run stats and eat lots of free food with new friends from other ACC and North Carolina schools. It was definitely a different way to spend my spring break, but I would not have asked for it any other way. I saw UNC whoop Virginia Tech before falling in a dreary match to Syracuse that ended with both benches cleared for the last minute of the game. Little did we know, it was going to be the last game of college basketball we would see for quite some time.

The timeline of events was nothing short of mesmerizing. Everyone I talked to insisted that there had to be games the next day and with fans. Then, we became fan-less and started preparing for that reality. It still seemed next to impossible that we would cancel the whole tournament. However, things seemed to be moving from bad to worse. I left the tournament on Wednesday night sure that I would be going back to work a fan-less day of basketball the next. Heck, I woke up Thursday thinking the exact same thing. A press conference from ACC Commissioner reassured me of it, saying that we would still be having games like normal, just without fans.

But around the country and the globe, things were getting serious. The novel coronavirus was transitioning to a national emergency and things were going to have to change. The sequence of events from that press conference and both Clemson and Florida State warming up will be forever ingrained in my brain. The Florida State band was playing like normal, dance teams from both schools were practicing and the few fans allowed in — mostly family members of players and staff — were excited to see their teams tip off in about 30 minutes. Clemson had left the court after warm-ups but Florida State came back out. It was only about four minutes later that they were ushered off the court, and that’s when I realized something was off.

I quickly went to Twitter to see what was happening nationally and found out that sports everywhere were totally rocked. Everything that transpired Wednesday in professional sports was absolutely wild, from Rudy Gobert testing positive and the NBA shutting down to the Ivy League cancelling all sports. The Big-10, Big-12, SEC and other smaller conferences had all cancelled their tournaments on Thursday morning, some right before tip-off. My Greensboro bubble, it seemed, was about to pop.

The first game was supposed to begin at 12:30 p.m. but at 12:14 p.m. we found out that it was over before it started. In perhaps the most awkward thing I have ever witnessed, Swofford came out on the court along with the Florida State Seminoles and Clemson Tigers. He outlined the issues pertaining to the virus as well as praised the Tigers for showing good sportsmanship in the trophy ceremony for the Seminoles.

The top-ranked Florida State squad was given the ACC trophy due to winning the regular season and were dubbed to represent the ACC in March Madness, if there was one. We later found out that there wouldn’t be madness either. It was a strange mix of joy and sadness, with the most uncomfortable facial expressions ever on both teams faces. The joy of winning the conference could have meant everything to the group of seniors who were ready to play their first ACC-Tournament game. Staff members carried the trophy to the team bus, almost like it was a painful reminder of the situation at hand.

Now, as I write this back home in Colorado, I am very glad to see the ACC taking the steps they did and following the national lead in cancelling the tournament. There was heavy criticism, as only a few people near Greensboro had tested positive. In hindsight, who knows what the real numbers are due to the state of North Carolina only having 300 total tests at that time. It is most definitely a shame to not have an ACC Tournament champion, March Madness or any of the sports events we know and love in March, but it’s a needed sacrifice right now for the greater good. Hopefully we will get back to normal soon, but for now watch some game replays and keep washing your hands.