NBA Spurs Other Leagues Into Cancellation 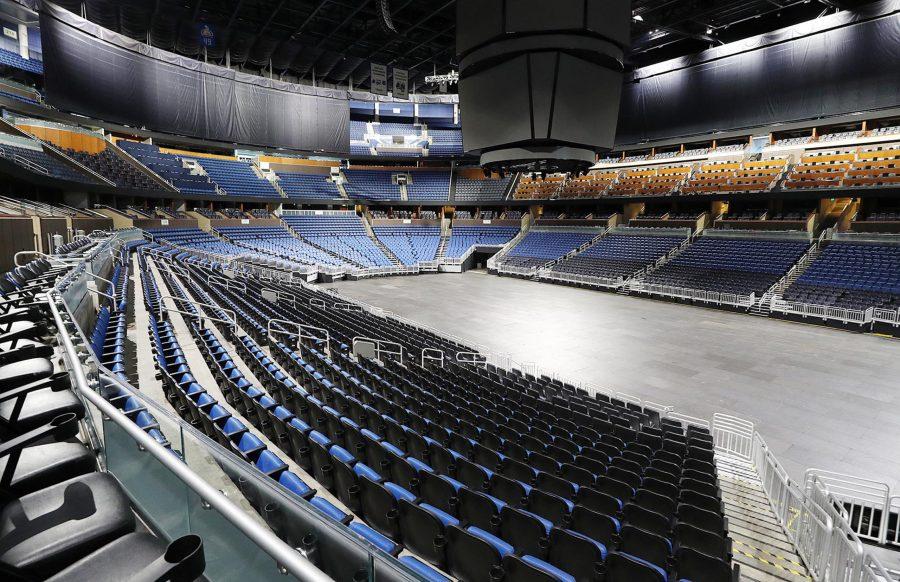 The seats are empty at the Amway Center in Orlando, home of the NBAs Orlando Magic, on Thursday, March 12, 2020. The NBA has suspended the season due to the coronavirus -- as have other sports. (Stephen M. Dowell/Orlando Sentinel/TNS)

Everyday seems to get weirder and weirder as the Coronavirus spreads across the globe. But perhaps no day was stranger than March 11. The day began normally, aside from the obvious, and I was hard at work at the ACC Basketball Tournament. After 8:30 p.m., things went from bad to worse to almost unimaginable in the world of sports.

At 8:40 p.m., news broke that the Utah Jazz and Oklahoma City Thunder game was postponed. Shortly thereafter, we learned that both teams were in quarantine and getting tested. Shortly thereafter, at 9:27 p.m., Rudy Gobert of the Utah Jazz tested positive for Coronavirus. It only took four minutes after that, at 9:31 p.m., for the entirety of the NBA season to be postponed.

The next day, March 12, more dominoes began to fall. It all began with Major League Soccer suspending the season at 8:42 a.m. The NHL followed suit when they paused their season at 10:35 a.m. The XFL had to pause their inaugural season as well in addition to having a player, on their Seattle team, test positive for the virus. It remains to be seen how large that impact will be on the rest of the franchise and other players on opposing teams too.

In the days to follow, it seemed that essentially every sport was ceasing operations for the immediate future. Really the only sport that is still continuing is the NFL and it is from afar. NFL Free Agency is alive and well with Tom Brady leaving New England and Cam Newton leaving the Carolinas. Most recently, Kevin Durant of the Brooklyn Nets tested positive for COVID-19. While no games are currently being played, it’s at least some semblance of sport that we can all cling to right now.

The Tokyo 2020 Olympics are still on for now, but it remains to be seen what the impacts will be. Only 57% of potential qualifiers have qualified for the games, with 43% still seeking qualification. The big question is both the viability of the games as well as qualifying for them.

While it is a needed public health measure, there are a whole slew of repercussions involved with cancelling and/or postponing the season. One of the largest factors at play is the status of non-salaried workers such as concessions and guest operations. Most of the teams, and some players, have jumped into action to help those workers in a time of need. The majority of teams now have decided to pay all of those workers as they would for the rest of their scheduled shifts. Some controversial moves in not paying these workers have been tackled by players jumping in. Nineteen-year-old Zion Williamson has volunteered money for the New Orleans event workers, as one example.

In all, no one could have predicted the sequence of events from the Jazz/Thunder game to players being tested and quarantined. Over the following 24 hours, the sports world was turned upside down and it will be a long waiting game to see what happens. As of right now, I have seen predictions of returns in June or maybe never, so it will be interesting to see what happens for the potentially lost seasons.