RUF Online Sessions Provide Beacon Of Hope For Many 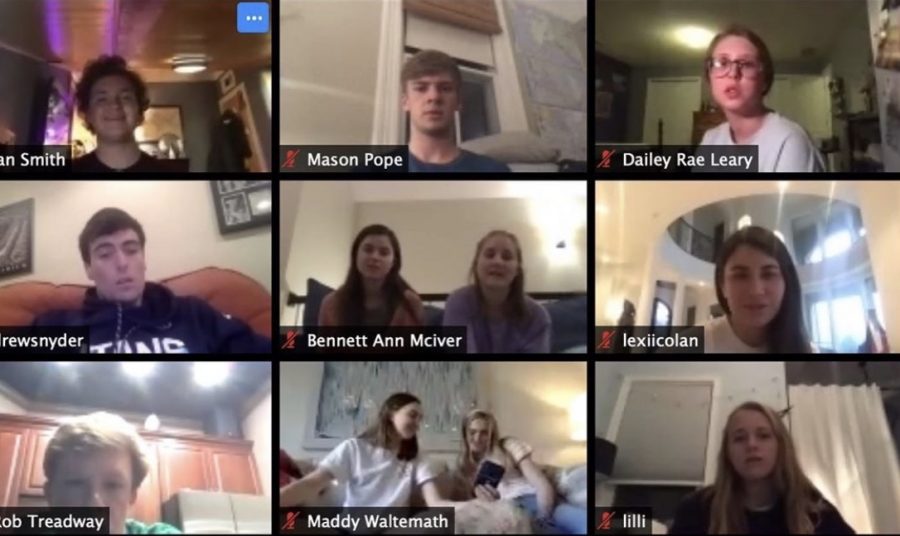 Reformed University Fellowship (RUF) recently traded out the Green Room for the green screen by holding sessions on Zoom, an online platform for video and audio conferences.

The first virtual large group, which was held on Tuesday, March 17, was a success. Nearly 80 people accessed the call through the link, including many familiar faces who regularly attend RUF during the semester, some new faces who have found more time now that other activities have been suspended, a couple family members joining their students and a few alumni who wanted to reconnect with the community.

By building a robust virtual network of support for one another, RUF minister John Bourgeois expressed his hope for how the RUF community can help people overcome this trial.

“There is a living hope offered to all who put their trust in Jesus Christ,” Bourgeois said. “I think my role and the role of the RUF community in this season is to be people who are committed to this hope in the midst of uncertainty.”

Through music, prayer, preaching and announcements, which are staples of in-person large groups, participants were able to feel grounded in the support of the RUF community during a time when many feel uprooted from the routine of their daily lives.

“During a normal school week, RUF large group was something I looked forward to every Tuesday night,” said sophomore Anna Loynes. “I am so thankful I can keep RUF in my calendar because some sense of normalcy is more important than ever. I know it is essential to keep my mind in a positive place and our first online session did just that.”

They also found positivity while greeting friends and newcomers, sharing experiences of dealing with the situation regarding the novel coronavirus pandemic, lifting their voices in song and praise and praying for the resolve, faith and hope needed at this time.

As an unexpected bonus, the session ended with breakout discussions in small groups, a new feature made possible by Zoom’s ability to split the entire group into smaller segments. During that time, group members could get to know each other on a more personal level and then discuss the biblical passage and the minister’s message.

Although much different than the usual format, even seniors who have been attending RUF large groups since freshman year were able to find the bright side of the situation and attest to the value of connecting with one another.

“We realize now more than ever that we were created to be together, connected to other humans,” said senior Katherine Laws. “Virtual RUF allows you to see the facial expressions of your friends, to hear their familiar voice, to listen to their laughter — and things start to feel more and more how they are supposed to be.”

As such, participants in the session appeared to enjoy the features of Zoom. Many commented on how they were glad to see each other’s faces, even if just through a digital screen.

With the benefits of online meetings, RUF has also decided to use Zoom in order to virtualize small groups and morning prayers. The minister also encouraged participants to connect with one another on their own time through online chats and video calls if possible.

Large groups will continue to be held on Tuesdays at 8 p.m., and small groups will also be held depending on the schedules of participants.

Additional opportunities to become more involved in the RUF community include participating in the virtual morning prayers — taking place Tuesdays through Fridays at 10 a.m. — and following the RUF Instagram, where “Insta encouragements” will be posted Tuesday through Friday.

By holding online sessions for many during a time of social distancing, RUF has remained faithful to the organization’s key principle of openly inviting all students to come together and hear about Christ, whether they are “convinced” or “unconvinced,” Christians or agnostics, believers or skeptics.

“Coming together is what we need to be human, and it’s part of what Christians are called to do,” Bourgeois said. “Here is where technology is an incredible gift — even when we are divided by distance, we are able to encourage one another. This gives us an opportunity to invite others to be encouraged.”