“I Didn’t Even Get To Say Goodbye:” Seniors’ Spring Semester Comes To A Halt 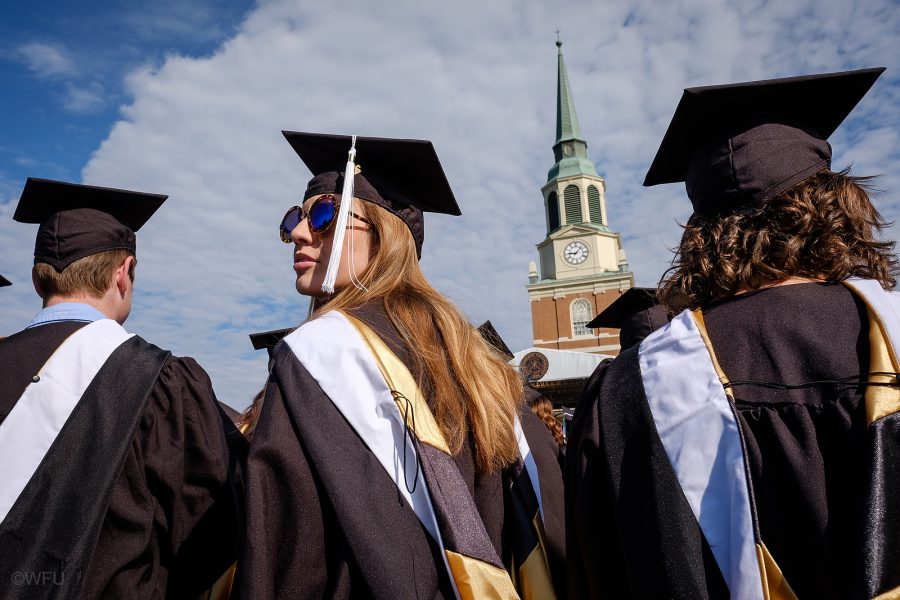 Wake Forest University hosts the 2016 Commencement Ceremony on Hearn Plazas on Monday, May 16, 2016. The graduates process onto Hearn Plaza.

At 7:43 p.m. on March 11, seniors Jenson Brown and Caleb Woody were on the beach in Daytona, Florida. They were drinking when they got the email from President Nathan Hatch with the subject line “COVID-19 Update: Changes to class schedule, suspending in-person classes.”

Brown didn’t process the information until after his nap. He woke up and thought, “Holy sh*t. I didn’t know that they could actually do that.”

Days before, seniors had been getting ready for spring break.

Senior Alexandra Kitterman was tired the night before she left. She packed for vacation, watched some Netflix and went to bed early.

“I never considered that it would be the last chance I’d ever have to be with them all together,” Kitterman said of her friends. The next day, she went to California with her boyfriend.

Senior Caroline Tompson went home to her family in Doylestown, Pennsylvania. She saw that her parents had been buying extras of essential items due to the coronavirus outbreak and laughed.

As days passed, though, the spread of coronavirus gave her a sinking feeling.

On the afternoon of March 11, information appeared under the Frequently Asked Questions (FAQ) section of the university’s special coronavirus website announcing that classes were cancelled the week after spring break and would then be taught remotely.

It was taken down shortly thereafter, but screenshots spread rapidly among the student body.

Senior Yassmin Shaltout was in Atlanta co-leading an animal advocacy Wake Alternative Break trip. Shaltout and other students were almost done gossiping about the FAQ page when they went to dinner. That’s when they got the email. The first five minutes of that dinner were really quiet.

Shaltout made people wait to call their families and friends until they were done eating. After that, you could overhear questions like “What will happen to my bio lab?” among the students.

The seniors on the trip reacted differently, though.

“We weren’t as concerned for our classes or how to get home,” Shaltout said. “The emotions of missing out and missing people and missing a place were at the forefront.”

It’s hard to find words precise enough for how all of this has felt for the senior class. Having classes move online and become remote in the middle of the spring semester due to a global pandemic is pretty crazy. It’s difficult to carve out a description of the experience and I’m wary of generalizing about the entire class of 2020.

How about this: if a range of nuanced emotions exist, then it’s fair enough to say that the seniors have tasted the rainbow.

Senior Chrysa Livanos and her friends were on the beach in Miami when they got the news. Some were excited at the prospect of classes getting easier after moving online, but Livanos was upset. She thought about the possibility that the class of 2020 might not be in the same place again for a while, or at all.

“I didn’t even get to say goodbye,” Livanos said.

Senior Jay Sherrill went back to the university from Fort Lauderdale, Florida at the end of the week. He and his three roommates stayed in their apartment at Deacon Place from Friday until they moved out on Tuesday before noon, per university protocol.

Sherrill saw people as they came and left campus to get their stuff. He hugged them in spite of social distancing (so far, none of them are sick, he said).

The night before they left, Sherrill and his friends popped champagne on the quad. They toured campus, visiting freshman dorms and academic buildings and sang the alma mater upon returning to the upper quad. Around 15 other people were doing similar things, Sherrill said.

The next morning, he took all of his things as he left, except for his bedding and maybe an ironing board.

“Just to give me something to go back for,” Sherrill said.

Senior Chandler Averette went home to Virginia Beach for break, planning on then taking a family trip to Orlando. That got cancelled, so he’s been home ever since. He wished that he could’ve been with his friends from the university during break. He applied to live on campus to finish out an internship in Clemmons but got denied.

On a practical level, college is over, Averette explained.

“But you’re not really closing the chapter on your own terms,” he said. “We’re more on a cliffhanger, not resolving anything.”

Senior Juliana Serrano has felt somewhat helpless. The stress is like a weight in her mind.

Her mother and grandmother have their tickets from Sao Paulo, Brazil to Charlotte for graduation, but it is still unclear whether graduation will still be held on May 18.

Serrano has a whole list of things to worry about. She’s an international student, and the way her student visa situation shakes out, she has 60 days after the last day of exams to leave the country.

If graduation is postponed to the late summer, Serrano might not be able to make it. It would either have to fall after the starting day of her new student visa she’s planning to get in order to attend graduate school for anthropology, or she’d need to apply for an expensive tourist visa.

She had planned on finding an apartment for graduate school before flying to Sao Paulo after the 60-day grace period ends. But those plans might change, too.

“There’s no good decision,” Serrano said. “All the decisions have some risk.”

Now the senior class is waiting for answers about whether classes will return to an in-person format this semester and about graduation. The university said it will deliver those verdicts by March 30.

In the meantime, Brown has been at home in Jacksonville, Florida. On Tuesday, he sunbathed outside and listened to Alan Jackson. His Snapchat pulled up memories of what he did during previous St. Patrick’s days the past three years at the university.

Kitterman got tested for coronavirus after feeling sick. It came back negative.

Tompson has been reminding herself of what she can look forward to: graduate school, visiting the university this fall and eventually seeing her friends again.

Shaltout lives in Winston-Salem, but she has only been on campus for 30 minutes to get her essentials from Luter Residence Hall. Taking pictures in front of Wait Chapel like other seniors would have made her too sad. In the words of Shaltout, she is already feeling “heartbroken.”

Livanos is staying in her off-campus apartment with her roommate. She woke up one day this week and thought she needed to get ready for class. It was noon, though, so she would have already missed it.

Averette has been figuring out how to virtualize the movie nights he usually hosts for his friends.

Sherrill is at home in Statesville, North Carolina. He’s been applying to jobs, studying for the Law School Admission Test and finally finishing A Gentleman in Moscow by Amor Towles.

Serrano considered going home to Sao Paolo. Instead, she’s staying with her boyfriend, a master’s student at the university, in his apartment in Winston-Salem, in case she needs to mail any documents for graduate school.

“It’s all understandable, but that makes it kind of worse,” Livanos said. “I can’t be mad at the school because they’re doing something that’s right. It’s a lot of memories I’m going to miss.”