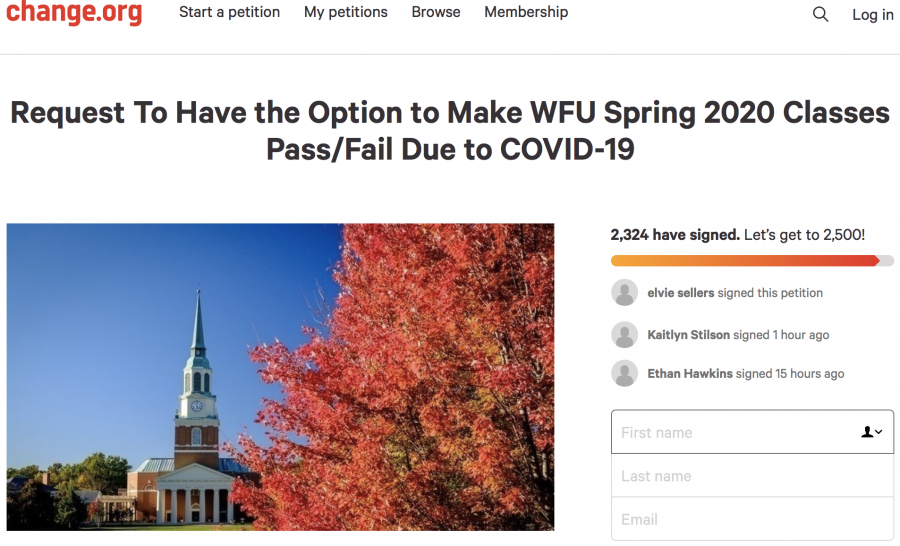 Receiving more than 2,000 signatures in four days, a petition started on March 18 called on the university to offer a pass/fail option for students. Noting that virtual instruction would not provide the same resources for students, the petition also mentions nine other institutions — including Duke University and Davidson College — that have adopted this choice. On Sunday March 22, Dean Michele Gillespie announced that the college would be offering a Spring 2020 Only Pass/Fail option to undergraduate students.

“At the outset, we stress the singular nature of this event. It is a one-time exception linked directly to this specific emergency event (COVID-19) in this particular semester, Spring 2020,” Gillespie said in an email to students.

Students will be able to opt in for pass/fail for the course(s) they choose before the deadline on April 17. Gillespie also noted that there are exceptions based on certain departments and whether or not a student is receiving financial aid through a merit-based scholarship.

In an email sent to students, the Psychology Department explained that they were still in conversation with the Office of Academic Advising and other campus bodies to straighten out the details of the pass/fail option. The message asked majors and minors to “hold off on making any decisions until [they] know more about the implementation of the plan.”

The petition, which was created by junior Elvie Sellers, was widely shared on social media between students. In an expansive statement, Sellers explained how the situation caused by the coronavirus pandemic (i.e. the possibility for students and professors to fall ill, as well as the stress caused by the outbreak) would make it even more difficult to succeed in online classes — which already limits the ability for students to seek help and makes it harder for professors to respond to the best of their ability. She also outlined a path for the university to take, which models Davidson’s plan for their spring semester pass/fail option.

“I actually shared the petition with about five professors I trusted. From there, they shared it with as many faculty members as they could,” Sellers said. “Before long, I noticed [there were] entire departments signing my petition and other professors I didn’t know emailing me for the petition. During the department meetings it was brought up, and then shown to the Dean yesterday.”

Sellers said that she was inspired to make the petition after talking to friends who attend similar institutions.

“The biggest trend I saw was that if there was push back from students towards traditional grading policies, the Deans and presidents had no choice but to address it,” Sellers said. “But, at other universities where there was no pushback, the university never put in place a pass/fail policy. I decided to start the petition after contacting one of my professors who strongly advised me to make noise if it was something I wanted changed at Wake. So I looked to see if there was a petition already made and there wasn’t so I just started writing.”

Religion Professor Stephen Boyd signed the petition, and voiced his support for the pass/fail option.

“As a faculty member, I think this option is reasonable, humane and conducive to the learning that is possible under these conditions,” Boyd said in a comment on the petition.

Senior Ammar Idris, who also signed the petition, told the Old Gold & Black that he thinks a pass/fail option would allow students to finish off the semester without any more unnecessary stress.

“I only wish the university was able to make their decision more universal. It feels to me like they’ve attached some meaningless stipulations to this — like the fact courses can’t be repeated for a letter grade in the future, or the asterisk addition saying financial aid and certain programs won’t accept the pass/fail option,” Idris said. “It means students in tough situations still have to worry about arguing their cases to departments or worry about their financial aid in a time when that shouldn’t be a concern. Overall, I’m happy the decision went through, but I feel like a little more could have been done”

While students are still waiting to learn more about the details and stipulations of the policy, Gillespie detailed in her email that the university is continuing to adapt in order to provide students with the necessary resources.

“I want you to know that the University and the Office of the Dean of the College have been meeting about each of these concerns around the clock, making our decisions based on the public health guidelines recommended to us,” Gillespie said in the email. “We want you to have the resources and connections to finish this semester strong while also staying safe and well.”