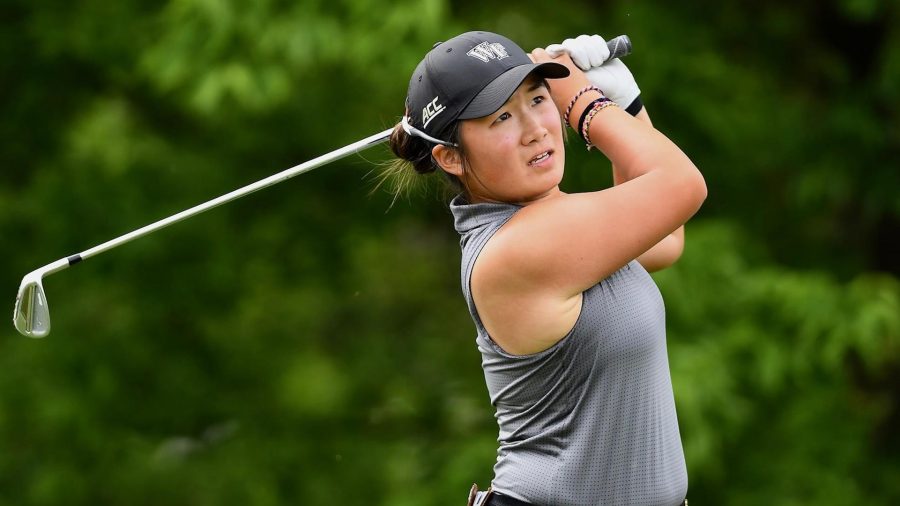 After the graduation of NCAA star Jennifer Kupcho, the women’s golf team needed a senior to step up and lead the star-studded team. That role landed in the capable hands of Siyun, “Swing” Liu, the team’s lone senior. Hailing from Shanghai, China, Liu trained with the Chinese National team prior to heading to the U.S. for school. She began her college career at Illinois before transferring to Wake Forest after her freshman season. As a sophomore, she played in 12 events with a 74.18 scoring average. As a junior, she played in all 11 events with a 72.45 scoring average and earned All-ACC Distinction. She was the lone Deac at the NCAA Championship, finishing T-23rd and went 2-0-1 in match play during the NCAA Championships including a win in the final vs. Duke. In her abbreviated senior season, Liu played in all seven events, finishing with a 71.95 stroke average.

Swing Liu: Winning the Darius Rucker a couple weeks ago. Although I was unaware of it at the time, it is a great way to cap off my college golf career. Draining a 55-footer on my 17th hole with a big crowd cheering for me was also surreal. Another one is my hole out on my last hole of stroke play at the national championship last year.

SL: Being on the team here is like having a family away from home. We all spend so much time together and we practically talk about everything. I really appreciate how we are always able to have open and frank conversations and because of that, the amount of trust we have in each other is just amazing. Our trust for each other gives us a sense of safety during tournaments, knowing that my teammates will have my back even if I am struggling.

My time at Wake definitely taught me how to be a better team player in general. Since our groups are all together during tournament rounds, my teammates are able to see all my reactions to my shots. That being said, if I can exhibit more positive reactions, maybe my teammates watching me play will be more motivated since they know that I am playing well. On the flip side, I learned to hide my negativity when I am not performing well because again, my teammates will see what’s going on and the negative vibe can, in turn, affect their performance as well. In short, the biggest thing I learned is the importance of always staying positive, because the positivity will radiate and become reciprocal.

The same idea applies to any environment with a group or organization. The positivity, or negativity, I show will affect the people around me, and their action will in turn further give my day a positive/negative spin.