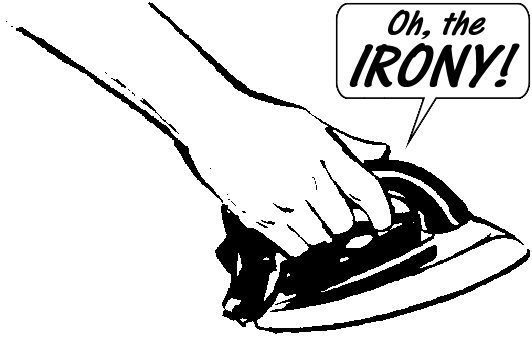 The essayist Lewis Hyde once wrote, in an essay about John Berryman, that “Irony has only emergency use. Carried over time it is the voice of the trapped who have come to enjoy their cage.” Most have probably come to Hyde’s notion through David Foster Wallace’s paraphrase of it, in an interview from 2003, where he calls irony “the song of the bird who has come to love its cage.” The looping soul-sabotage of the ironist becomes a kind of willful blindness to sentiment, the cyclic dark that at its core refuses to plainly probe the human without satirizing, poking, laughing or otherwise deflecting it. Even Woody Allen, in a documentary about his work, claims he prefers the tragic muse to the comedic one. Though irony can sustain us, it feels, eventually, like a lute with two strings where three are possible. One can easily pair Wallace’s paraphrase of Hyde with this more-famous quote about the distancing provided by cynicism and irony: “What passes for hip cynical transcendence of sentiment is really some kind of fear of being really human, since to be really human […] is probably to be unavoidably sentimental and naïve and goo-prone and generally pathetic.” The desire to transcend sentiment — to avoid its self-affrighting confusion, its scoff at reason and its physical spontaneity — is innate, especially for creatures who continually invent explanations around a campfire.

Though irony can sustain us, it feels, eventually, like a lute with two strings where three are possible.

But why can’t some artists, those of us supposedly tapped into something greater, ever leave the ironic mode? What about the ironic mode appeals to artists, and is it itself a kind of sincerity? We laugh so as not to cry, but is it healthy to laugh off every bout of tears? The squinty skepticism some artists attach to feeling foments another skepticism: that of their aesthetic achievement. Since their reluctance to describe sincere feeling (love, let’s say) comes through a kind of parry, a pessimistic shading laced with witty deflection, their approach can seem facile. The persistent ironist embodies Allen’s aphorism about sex, that it’s used to express every emotion except love. Both have immediate, visceral appeal, but also appear as shortcuts. Irony’s agility, its sprint to smother darkness with a lighter shade, becomes an out-through-the-in-door trick designed to mollify. The mysterious center of the human experience, that impenetrable, fear-foggy darkness, becomes a saccharine, Quixotic experiment to the ironist. It’s easier to make a joke about it, poke around the edges. It takes courage to hug nothing, and even more to claim it’s worth. But ultimately the shimmer’s discourse with us penetrates, most meaningfully, portions of the human experience — the inexplicable potential of consciousness to continuously double itself while suspended without words. Irony is always utterable, but whatever we glean from beauty becomes sentimental, unspeakable because beauty in its absolute shocks us back to infancy. It renders us lamb-like, and words are an attempt to transmute innocent sound into syllable.

Self-deprecation has its place, especially in establishing sympathetic social circles, sustaining humility and a whole host of friendly accouterments that show you aren’t completely self-absorbed, know how to have fun, etc. And cynicism and irony have value. The aesthetic re-sighting furnished by acute observance helps weave the subjective in a rich, rhetorical mode. Plus, levity. But I’m dubious of irony’s place as a total artistic mode. It becomes tiresome, and it takes a lot of energy to stay panicked. Yet even so, most great comedians and ironists, based on reports or writings, can’t sustain the dance, either. William Hazlitt, great pugilist, as well as relentlessly witty provocateur and peer of the Romantic poets, wrote Liber Amoris, a confessional supposedly so raw and revealing that it smells modern. After a career in the caustic mode, Hazlitt poured all his jilted sentiment in a book his friends felt embarrassed about. We can laugh, joke and prod the pitiable parts of existence, but somehow, in the end, I think we always come out big sweeties.