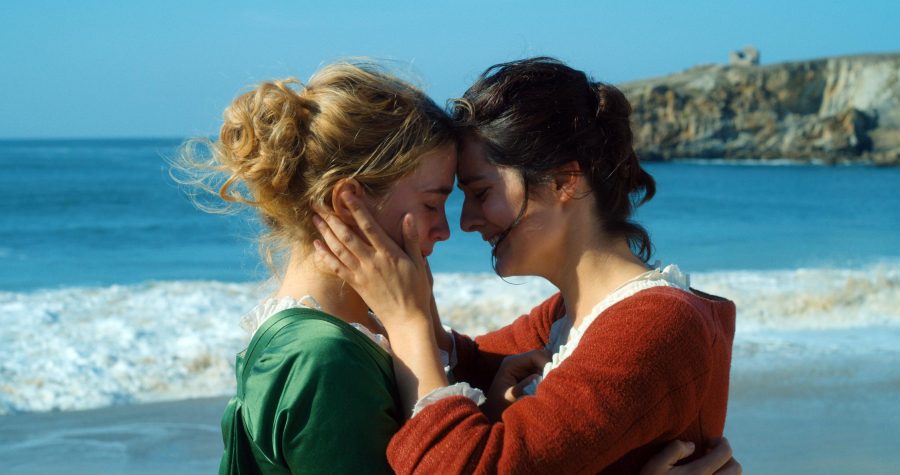 This image released by Neon shows Adèle Haenel, left, and Noémie Merlant in a scene from "Portrait of a Lady on Fire." (Neon)

Céline Sciamma’s 2019 film Portrait of a Lady on Fire was slated for an American theatrical release in March 2020, but was instead released on Hulu given theater closures across the country.

The film is about women: the friendships they develop, the losses they experience, the emptiness they feel, the institutions which oppress them and the images of them we create, re-create, hang on our walls, give to our partners and burn in our fireplaces. Men are nearly absent from the stage, but lurk in the violent waves and winds that berate the rocky Brittany island where a Parisian painter, Marianne (Noémie Merlant), finds herself commissioned to produce a wedding portrait of a particularly elusive subject. Marianne’s job is made difficult by Héloïse’s (Adèl Haenel) refusal to pose for her portrait – in fact, a previously commissioned male portraitist has recently quit for this reason, leaving behind an eery, faceless canvas. So Marianne takes walks with Héloïse along the blustery coastline, stealing glances and committing to memory the fine details of her face and features – erstwhile pretending not to be a painter at all.

Héloïse’s marriage is a recent development, and one she resents deeply. She is a lesbian, and had found haven in convent life until her sister’s suspected suicide forced her home and into a forthcoming union to an Italian aristocrat. This underlays her refusal to pose for her wedding portrait, to be captured now and in posterity, to be given to someone, hung on a wall; to do so would constitute a submission to patriarchy, a victory of the male-gaze and a loss of self-determination. Marianne’s walks with Héloïse kindle a mutual attraction between the painter and her subject, and the two become allied in their intense affection for one another. Héloïse, initially put off by the revelation of Marianne’s true reason for visiting, comes to find in their evolving, intimate relationship a chance to imbue her wedding portrait with a meaning and context all her own. That her image be created with her consent by a woman she loves makes portraiture acceptable to Héloïse, a secret kept between herself, Marianne and the canvas, to which her husband will never be privy. If patriarchy exerts a pressure on every other facet of her life, it will always in a way be the unsuspecting object of a joke in Héloïse’s wedding portrait.

Living with Héloïse and Marianne is the young housekeeper Sophie (Luàna Bajrami), who in the course of the film is revealed to be pregnant and seeking an abortion. Héloïse and Marianne accompany her to an herbalist living on the island who performs the operation. That night, as she recovers, Sophie poses with Héloïse, recreating the scene of the abortion as Marianne captures the image on canvas. The painting that results, as well as a pair of nude sketches which Marianne would later produce of herself and Héloïse, affect a kind of personal rebellion against the patriarchal forms of image-making which confine Marianne’s artistic expression and undermine Héloïse’s control over her body and its implications.

Marianne seems begrudgingly aware that her creativity is contained within a realm of acceptable femininity, that feminine artistry requires the observation of certain aesthetic standards. To be a woman and an artist, Marianne is obliged to perpetuate these norms. But Héloïse and Sophie prove subversive and consenting muses, and the images they produce together are subject to the scrutiny of nobody but themselves.

The film is structured as a memory, beginning as a flashback precipitated by a question. The question concerns a painting of Héloïse walking on a beach, the tail of her dress in flames. The painting hangs in Marianne’s studio. The question is asked by a student in a class of woman painters whom Marianne is instructing. Her experience with Héloïse and Sophie thus appears to have shaped Marianne as a painter, compelling her to work against patriarchy in art by elevating woman artists. The titular portrait of Héloïse, dress alight, reflects the recurrent, nearly ubiquitous presence of fire throughout the film. This conceit could suggest anything: a burning anger, a burning passion or a life combusting under the scope of a searing patriarchy.