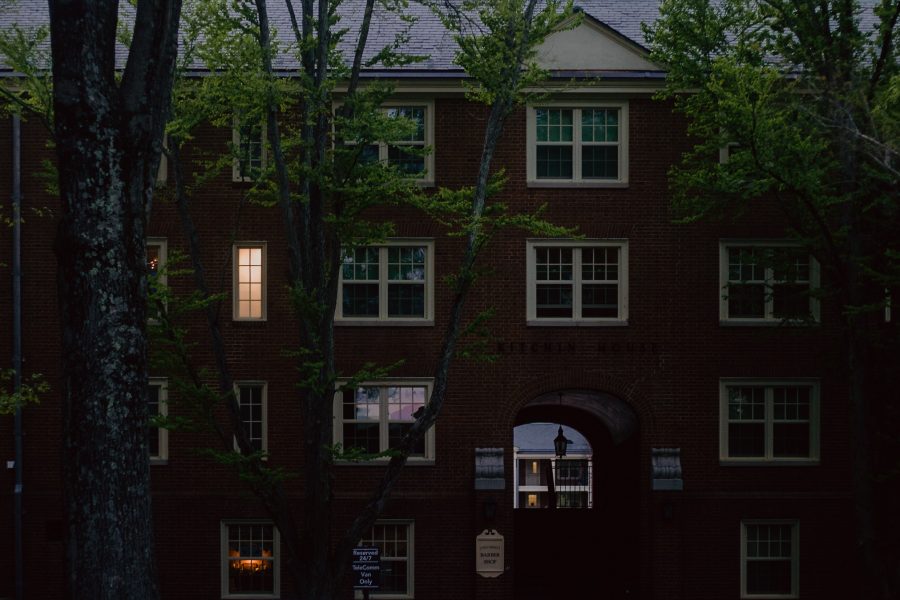 The arrival of April always marks a grand revival on campus. The numbness and intensity of winter subsides and students flock to the courtyards, quads and fields dotting campus to celebrate the sun. Sadly, thousands of students will not get to experience that communal spirit this year. They have been forced home and must instead turn online to grieve together over their loss.

But what about the 400+ students who remain on campus, caught somewhere that is neither home nor school? They are where thousands of others wish to be, but living on a campus under lockdown brings its own difficulties.

“At first, I felt grateful. At least I was still on campus,” said Khushi Arya, a first-year student from Delhi, India. “But I soon realized that Wake Forest really isn’t even Wake Forest without the people there.”

Arya said that during the first week after spring break, she reveled in the freedom of living alone. She had no rules and no schedule, leaving her free to watch her favorite shows and dance in her room at 2 a.m.

Before long though, Arya realized that this lifestyle was not going to be sustainable. “Things quickly became very lonely,” she said. “Sometimes I would see another person on the way from my room to the Pit and I would just want to scream ‘Hello’ to them.”

After the university officially announced its decision to stick with remote learning for the rest of the semester, Arya decided it was best for her to leave. Unable to return home because India has been under a strict lockdown since March 22, she instead made the journey to Michigan where she has an aunt she is now staying with.

“I didn’t realize how lonely I actually was on campus until I came home,” she said. “I wish I had done this much sooner. The physical illness is not the only thing affecting people, there is also mental health at stake here.”

Of all the students remaining on campus, the largest proportion of them are international students from China. To help support one another, they have organized a community on WeChat, a popular social media app in China. There, they can ask questions, share information and maintain a sense of community away from home.

Freshman Matt Fan outside of Collins Residence Hall – “Campus feels so empty. I can only describe the feeling walking around as creepy.”

While the chat has been beneficial as a platform for community, some have said that the group adds to their stress because not all the questions being asked have answers.

“Every day, things are changing,” said sophomore Chenghuo Zhu. “There is a lot of uncertainty: regarding campus, regarding our homes in China, regarding everything.”

Chinese students have the added perspective of having experienced COVID-19’s initial spread throughout China close hand. Now, they are watching institutions around them learn to deal with this disease for the second time.

This comparison between their uncertainty in a U.S. response and the risk of traveling home to a post-peak China has become a mathematical calculation that students run in their head each day.

“I’m alright with some loneliness,” Zhu said. “Safety is my top concern. As long as campus is safe, I’ll take that over risking a flight home.”

Many others echoed his feelings, saying that the lengthy flight home was dangerous and the 12-hour time zone difference would mean classes at 1 a.m.

On the opposite side is Cheng Zhuo, a senior from Wuhan who was in the city as rumors of the disease began to grow and who witnessed ground-zero of the pandemic through his family members still there.

“Just when it looks to be over for Wuhan, now it begins in America,” Zhuo said. “If there was a chance for me, an affordable plane ticket right now, I would not be in the U.S. anymore.”

Zhuo said that he actually possessed a ticket to return to China over spring break, but that his flight was canceled. Many airline operators stopped or reduced flights to and from China while it was the center of the disease. As a result, the few tickets left have skyrocketed in price, preventing even those who are willing to risk the flight from obtaining a ticket.

So, for now, hundreds of students remain here in limbo. But if this is no longer Wake Forest, what is it? Those who remain are grappling with this reality. They are adapting, and they have found different ways to breathe a new essence into their surroundings.

Arya, the student who eventually left campus, said that in the past weeks she began to develop a relationship with the employees in the Pit who she saw several times each day. They remembered that she was vegetarian and began specially packing food for her.

“In little ways, we who were still around found ourselves trying to support each other,” she said.

Other students seem to have paired off – an attempt to responsibly distance from groups while maintaining the dire need for real human contact. Both Zhu and Zhuo still have a roommate to share meals and discussions with. They say they are cooking together, playing games online and finding new ways to pass the time.

Sophomore Bella Sunthornpong from Bangkok, Thailand, self-isolated for the first weeks after spring break to ensure she didn’t have the disease or transmit it to anyone. As a result, she had almost no human contact beyond calls to friends and family.

“I didn’t even have a clue that there were many other people on campus then,” she said. “One night I looked out my window and I saw several other windows with lights on. That’s when I knew there were others here too, people in the same situation.”

A checkerboard of lights on inside Magnolia residence hall

More than anything else, students find any excuse they can to take walks. Not the hurried, head-down walks students make between classes – these walks have a slower pace to them. Students have even begun taking the long route to their destinations.

“Walks are a relief for us,” said Thrandia Dong alongside her friend Nikky Yu, both juniors from Beijing. “When you live alone and you don’t leave your room or see other people, you shut yourself down,” Dong said.

“I think campus might be even more beautiful when it’s empty,” Zhu said, holding up his camera to reverse roles and record our interview for himself. “I’m filming everything as I take walks to document this moment. We’re part of history now.”

He has a point. In the absence of its students, the physical parts of campus are allowed their full potential. The birds sing louder and the colors feel brighter now than it feels like they ever have. April is still here, regardless of the students. That tradeoff is especially difficult for seniors like Isabella Ryan to reconcile.

“When I walked across the quad today, I stopped to admire it,” she said. “But at the same time, I know I’m not graduating on that quad in May.”

Being on campus every day makes that loss more difficult to come to terms with, she says. For those who left campus, the grief was more immediate and tangible. For Ryan, it still doesn’t feel real. She’s still here – wherever here is.

This new space eludes a single definition. Wake Forest has always meant different things to different people. Naturally, different people are also deriving their own meanings from this new situation they find themselves in.

This space is simultaneously solo dance parties at 2 a.m., self-organized support groups, walks exploring every possible inch of campus and a reassuring patchwork of window light cutting through the darkness.