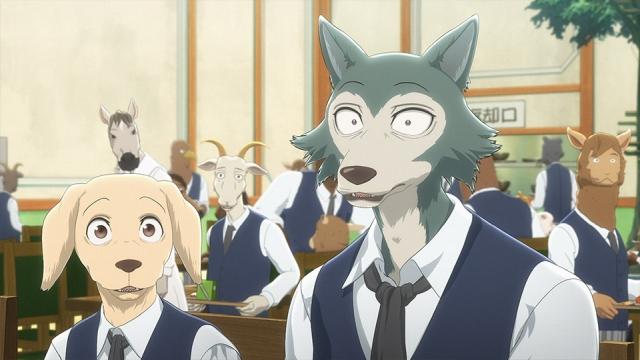 The layman Netflix streamer may be smitten with the temptation to pass up Beastars. Its characteristic blend of CGI and traditional Japanese animation is as startling as its vigorous yet confusing anthropomorphizing. Even reading that description makes it seem a nigh understandable decision. But it would be the wrong one.

Beastars is a visual feast for all five senses — and a few more excluded by the medium of print. Based on a manga by Paru Itagaki, the visceral program synthesizes timeless themes and motifs that hold penetrative power over the hardest of constitutions.

The show, of which there is currently only one season, depicts your typical private boarding school — set in a universe of anthropomorphic animals. The main character is a hulking, brooding wolf named Legoshi, who is ashamed of his carnivorous desires. He meets a spry young rabbit named Haru, and develops complex feelings for her. It may be love, or it may be blazing carnal hunger.

Other characters include Louis, a suave and sophisticated deer with something to prove, and Gouhin, a prickly panda who works as a back-alley doctor, serving as an abrasive yet refreshing representation of the mentor trope. Many of the central characters participate in the school’s drama club, refining their thespian skills in the hopes that they may someday be promoted to Beastars, the name given to the animal society’s elite class.

Therein lies the central tensions of the show. As the converging genres illustrate, the show’s mostly teenage cast faces many of the typical problems of emergent adolescence: sex, bullies, coming of age, aspirations, love, sex, etc. But the animal aspect of the program merely compounds this focus; the underlying tension between herbivores and carnivores is metaphorical for many of today’s social tensions, in a manner mimicking the film Zootopia (but not vacuous or insipid).

Beastars is a titillating smorgasbord, a potpourri of sensuous relatability that holds a mirror to the sinuous tensions of modern society. It synthesizes grave social commentary with smatterings of tasteful humor, all fueled by a pounding, throbbing heart. The show is guaranteed to get all sorts of humors flowing — perhaps providing brief solace from the troubled times we live in — while hammering home an important message: the fault is not in the Beastars, but in the beast-selves.