The Atrocity That Is CW’s All American 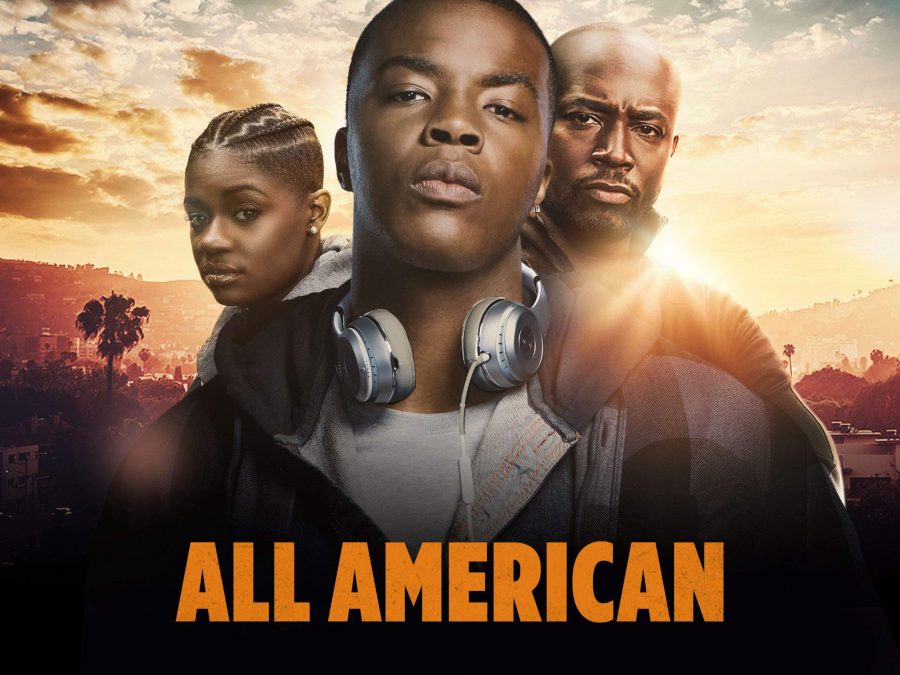 All American starts with an interesting, albeit conventional, story. A young football star who grew up without a father, living in an underprivileged community rife with gang violence. Stereotyping aside, the first episode, where I initially had high hopes, starts with a scene so over the top that my eyes almost rolled back into my brain. Subtlety is not a strength of these producers, in any stretch of the word.

We are introduced to our protagonist, Spencer James, as he substitutes in his own play call for his coaches. To no one’s surprise, it works perfectly as he walks into the endzone. While watching, there were many distracting factors that drew my attention away from the main plotline. For starters, the whole crowd acts like they are hopped up on MDMA at a rave. Flailing hands, jumping, dancing: this is a three-hour football game, not Twister. I’ve been to many high school football games, in an area of the country where it’s practically religion, and no fan section is like that. It’s usually one or two divorced dads yelling at the coach for not playing their son, not passing enough or not blitzing enough.

Further, the gameplay throughout the whole show looks like a live-action version of Tecmo Bowl. It’s so exaggerated and hyper focused on Spencer that I can’t enjoy it. I don’t need to see seven closeups on Spencer sprinting; I get it, he’s fast. Show me some wide-angle shots so I can see the play develop. Show me his speed and raw athleticism by comparing it to other players, not by adding in cheesy sound effects. This is never remedied through the first season, so I won’t complain about it anymore, but it needed to be said. Furthermore, throughout the whole season, the PA announcer is oddly specific and provides way too much detail. It’s not a rare occurrence to hear the announcer say something to the effect of “and wow, Crenshaw is stifled again. They just can’t get anything working!” or “and back on the field is Asher Adams (more on him later), who was suspended for the past two games.” No PA announcer anywhere says that. On top of that, I’m perfectly able to remember the context — especially when the PA announcer reiterates something that happened earlier in the episode.

As soon as Spencer reaches the end zone for his game winning touchdown, he witnesses a drive by gang shooting. Players, referees, coaches, parents scatter for cover while Spencer stands perfectly still, staring. I get the point, he’s used to the violence, but I don’t care how many shootings you’ve been around, you duck when the bullets start flying. Subtlety, remember?

Spencer is then approached by an ex-NFL player and hot shot coach of Beverly Hills Billy Baker, portrayed by Taye Diggs (best known for the “people are constantly asking me” Vine). The rest is a blur; Baker asks Spencer to come play, he says no, then later yes, then has to move into Baker’s house because his son, the starting QB, leaked allegations of illegal recruitment. All in the first episode. Whiplash, right.

Spencer meets his new, incredibly attractive, buff, losing teammates. You’re trying to tell me these guys were a bad team? No 16-year-old looks like that unless they are Serena Williams  and LeBron James’ offspring. The rest of the season has all the clichés you could possibly think of; teammate fights, awkward cultural adjustments and the sharp fall of the bratty, overprivileged white wide receiver, Asher Adams. In a matter of like seven episodes, Spencer has Asher’s girlfriend, his starting position and the admiration of his teammates. Asher, on the other hand, is kicked off the team and lives out of his car. His dad goes broke, his mom leaves and both of them kick him out of their house. Remember, subtlety?

The whole time, I just can’t help but be confused by the timeline. Spencer leaves Crenshaw after winning a game, which wasn’t in the playoffs, but somehow is able to get over to Beverly in time for the start of the season? Did he time travel? Does Crenshaw play in a summer league while Beverly plays in the fall? There’s no plausible answer for this. It’s almost like the producers of this show spent more time seeking out attractive, biracial, 25-year-old actors to play 16-year-olds than they did thinking about the logical timeline.

Whatever the case, Crenshaw and Beverly both win out and face each other in the state championship. Spencer nearly paralyzes his former best-friend and Crenshaw, who is quarterback, wins the game by returning a block field goal for a touchdown. A very underwhelming climax.

Along the way, Spencer is offered a bribe by a booster of “Angeles Southern University.” Spencer does the right thing and returns it. The show can’t figure out if they want to be grounded in reality or not. On one hand, you have UCLA and USC featured prominently. On the other hand, Angeles Southern is the best program in LA, and Spencer’s dad left to coach for “Eastern Nevada.” Do better. Angeles Southern’s booster puts $2,000 dollars in an envelope for Spencer and just hands it to him in an attempt to ensure his commitment. Now I have no idea about how bribes work in college football (maybe I should interview Mack Brown?), but that’s certainly not it. There’s got to be a little more nuance or subtlety to the process. It’s the equivalent of going up to a hooker with a megaphone and shouting “HOW MUCH FOR ONE NIGHT?” There are just too many examples of implausible reactions and scenes in this for me to receive any type of enjoyment.

The lack of character depth in this show is almost criminal. The vast majority of characters are painfully one-sided. Coach Baker’s old-fashioned dad is estranged from his son because he doesn’t approve of his white wife. Coop (Spencer’s gang banging friend), is kicked out of her house because her gospel singing mother doesn’t approve of her homosexuality. Olivia Baker is a drug addict every fourth episode, or whenever it’s convenient. I feel concussed from the number of times this show hits me with its obvious metaphors.

The season ends with a mother-trucker of a cliff hanger — Spencer’s father comes back into the picture to accept a coaching job at Crenshaw and hopes Spencer will transfer back to play for him (Derryck Thornton, anyone?). Dylan, Spencer’s younger brother, could be the product of an affair between Billy Baker and his wife.

In a way, I’m almost insulted by this show. It beats you over the head with clichés and innuendos until you’re too downtrodden to care about the inaccuracies and inconsistencies. If you’re a football fan or over the age of 12, you’ll find the little details and the character development incredibly frustrating. But just as Coop keeps getting dragged back into Crenshaw’s gang scene, you’ll get dragged back into season two. Perhaps it’s boredom or desperation, but there’s something urging me to watch season two.