“COVID-19 was once a distant threat … now it was in my lungs” : A student’s account of fighting the coronavirus 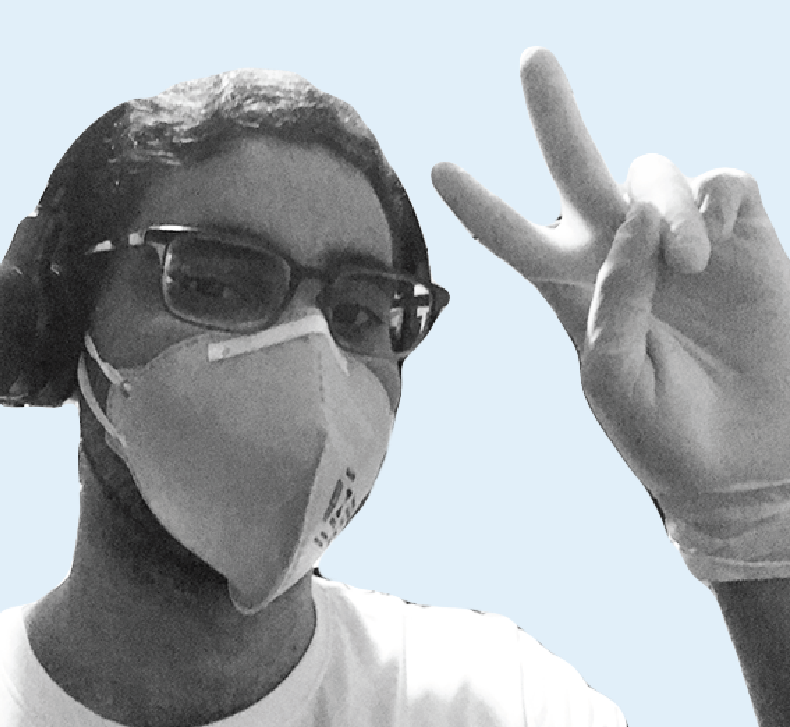 Much akin to millions of people worldwide, contracting the novel coronavirus abruptly put my whole life on hold and deeply changed my perspective in the process.

On March 12, I was living abroad in Brussels, Belgium when it all came down. Fulfilling the abroad student stereotype, I was delighting myself to some Belgium fries and discovering the wonders of a ketchup curry sauce that is so deliciously peculiar and truly encapsulates the whole weirdly beautiful vibe of Belgium. I had just gotten off the phone with my program adviser and she assured me that there were no plans from CIEE, my study abroad provider, to send exchange students back home at the moment. I was set on staying there and happy that I could keep my study abroad experience when others were forced to go home. Although I didn’t know it then, it was my last normal day in Belgium.

A few hours later, news broke that CIEE changed its mind and decided to suspend all its study abroad activities. We were told we should try to leave the country as soon as possible. Within the next few days, Belgium adopted self-isolation measures and the lockdown soon followed. The once joyous and vibrant streets of Brussels were now devoid of the usual life and chatter that made my time there so remarkable. I was devastated that my first trip to Europe would have to come to a halt so unexpectedly. There were so many firsts I was looking forward to, like visiting London, Paris, Madrid and Rome, cities that I could only dream of growing up in a tiny apartment with my mom in Brazil. Or, attending my first Chelsea football game, a team that I discovered alongside my passion for sports as a kid.

“Should I even go home?”

Even with all the sudden changes, I was mostly happy to do my part and resign myself to my room until my flight home with Tap Portugal on March 21. At least I would get to see some of my family members, and was looking forward to hugging my mom after undergoing the recommended quarantine period.

Yet, on Tuesday, March 17, I woke up coughing a lot, which at first did not alarm me much since my allergies had been acting up ever since I got to Belgium. However, I leaned over the bathroom sink to cough and noticed that there were some dark red spots among my cough mucus. I could not believe it. A million thoughts crossed my mind at that point but the one that stuck with me the most was denial. Coughing blood was not one of the symptoms caused by the coronavirus, at least that was what I thought at the time. So, I just shrugged it off and decided to treat it as a coincidence. That same night, I had a stomachache and a headache, which again I tried to find a logical explanation for instead of facing the possibility of having COVID-19. I mean, how could I? I was staying away from everyone as much as I could and following all the health guidelines, I thought.

The following morning, the headache and stomachache faded but the blood spots showed up again once I coughed. It was clear that there was something wrong. Testing was still very limited in Belgium and I was not going to get one unless absolutely necessary. I wandered around from one side of the room to the other. “What am I supposed to do now?” On one hand, I could not wait to be back home. In Brazil, I would be under the care of my parents, who are nurses, and would have their support to fight whatever I was having at the time. On the other, I could not help but think that by coming back to Brazil, I was risking putting the lives of other people and everyone I loved in danger if I indeed had the coronavirus. “Should I even go home?”

Eventually, I told my mom what was going on. She reasoned with me and convinced me that whatever I was having, I would receive better care for it back home. As much as I am ashamed to admit, it did not take much to dissuade me towards still going home. I never felt as out of place and helpless as I did that last week in Belgium. All I wanted was to be somewhere familiar again and have some sense of normalcy to cope with so many abrupt changes in my world. Deep down, I knew I was ready to be home.

Yet, as you already know, the situation in Europe got extremely worse towards the end of March. Italy passed China as the hardest-hit country by the virus that week and the EU decided to close its external borders. On Thursday, March 19, Tap Portugal announced it would suspend all but two of its itineraries to Brazil. Unfortunately, my flight had been cancelled. There were no other flights still going through the usual routes of Portugal, France or Spain that could take me home until April 28 at the earliest.

I called, emailed and even tweeted at Tap Portugal. I contacted my program advisers, the Brazilian embassy, Wake Forest and anyone that could help me still get home. I talked with my mom over the phone. She could not find any solutions either and her usually encouraging, calming voice gave way to silence. That was the last drop for me. I let my head sink into my pillow as frustration, despair and mental exhaustion finally overcame me. I was stranded over thousands of miles away from home and Wake Forest with no idea of when or how I’d be able to come back. I never wanted to be with my family and hug them as much as I did that day.

A few hours later, my CIEE adviser called me saying there was an itinerary with KLM flying through Amsterdam and Rio that would take me home in 25 hours. The flight would leave early on Friday morning, less than 24 hours later. Thanks to the prompt help from people at Wake Forest, I was able to finally get a flight home. I used up all three masks and ran my hands through all the purell I had during that trip. Three flights and a few long layovers later, I was finally back in Natal, my hometown.

Ever since Tap Portugal had canceled my flight, I was so focused on finding a way home that any symptoms I had over the ensuing couple of days went mostly unnoticed. I was not really looking forward to going to a hospital given the risk of unnecessarily exposing my mom and myself to the virus in case I had nothing. So, we agreed to keep me isolated in my room for 14 days as originally planned, unless something else happened.

Nonetheless, I woke up coughing again the following morning. This time, however, to my panic, when I leaned over the bathroom sink to cough, there were no small blood spots but full segments of dark blood clots instead. We immediately rushed to the hospital. The doctor asked for a battery of tests including tomography and the COVID-19 test. They had me waiting for the results in an isolated examination room until my results were back. I sat there for hours on a chair behind the gray door, so the doctors and nurses could ask me questions without having to directly face me. The more I waited in that cold room the more anxious I got. The whole day passed without me seeing daylight again and my hope that it was a normal cold, or some minor throat problem diminished as the hours passed as well.

The doctor finally entered the room holding my file. I remember him saying:

“Mr. Lima, your blood test came back all clear. So, you’re good regarding that. However, your tomography showed a viral infection in your lungs similar to the one seen in COVID-19 patients. It is still at an early stage, but you will need to be monitored.”

My heart dropped to my stomach at that moment. My mind immediately raced through a bunch of scenarios. “What does it mean now? Do I have the coronavirus then? What should we do moving forward?” I stuttered out.

The doctor explained that they could only be 100% sure once the results of my COVID-19 test came back and that it would take about a week. According to him, around 15% of the air sacs in my lungs were filled with a liquid resulting from my antibodies trying to fight the virus. If the liquid continued to fill my air sacs, as in the antibodies failing to stop the spread of the virus, it would cause difficulty breathing and pneumonia. To my luck, I had all the good health preconditions to fight off the virus with few long-lasting issues, if any at all.

It was still very hard to process all this information at once. Two months ago, COVID-19 was still a distant threat and the idea it could ripple through our lives so quickly still sounded like a worst-case scenario at that point. Now, it was in my lungs and I had to deal with it.

It was weird to communicate with my mom only by phone or through a door during my quarantine. We had to be extra cautious to avoid any possible contact with me. I was limited to my room and my bathroom for the next two weeks. Most of the time I would wear a mask and gloves whenever I opened my door to pick up water and food that my mom had left for me.

I was by myself but not lonely. My girlfriend, friends and family were all very supportive of me when they found out. I thought people would frown upon me as another contributor to bringing the coronavirus to Natal and consequently disrupting people’s lives. Instead, all I received was support and well wishes from people concerned about me. People that I hadn’t spoken to in years sent me messages of support and encouragement on social media.

Every day that passed I would cough out less blood than before until I finally stopped coughing and showing any symptoms. The test results finally came about 10 days after I came back from the hospital and it was indeed COVID-19. I was much more hopeful and positive about it by then. I was exercising in my room and back to a routine with my online classes.

I finally left my room a week ago, today. It was weird to be able to walk around the apartment and perform the simplest activities like pour my own water or sit down in the living room for the first time. I still don’t want to risk any contact with family members just yet, even though it has been probably around a month since I caught the coronavirus. I just don’t know how long I can be contagious to them.

My family Skyped me during our traditional Good Friday lunch to say how much they wished I was there at the table, while simultaneously making me envious of the fish they had prepared. I reassured them that as soon as it was safe, I would visit them.

Recently, I saw an article in the New York Times about the first wave of coronavirus survivors in the U.S that gave me hope and inspired me to do more with my newfound immunity. I am contacting health authorities to learn how I can donate my plasma to help with treatments here in Natal. Despite the grim circumstances worldwide, I have so many positive things to look forward to now: to helping, to being outside and to hugging my family again.