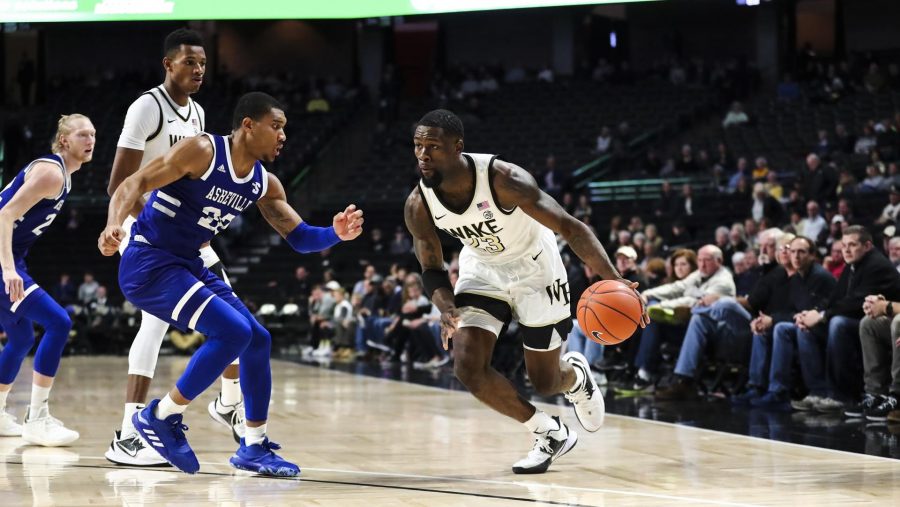 Junior guard Chaundee Brown announced his intentions to enter the 2020 NBA Draft Wednesday afternoon. The Orlando, FL native averaged 12 points and 6.5 rebounds in 23 games over the 2019-20 season. Brown was a consensus 4-star recruit and top 40 player in the high school Class of 2017. He was the highest ranked recruit to commit to Wake Forest since Al-Farouq Aminu, a lottery pick and nine year NBA veteran. Brown’s commitment to Wake Forest over powerhouse programs like Kansas, Florida and Connecticut, was supposed to signal the reemergence of Wake Forest basketball on the national level. Instead, in Brown’s three years, Wake Forest went 35-58 with zero postseason appearances.

Brown joins an increasing group of Demon Deacon players who have left without exhausting their eligibility. Just last year, Wake Forest lost freshman Jaylen Hoard to the NBA draft. Hoard went undrafted and has floated between the G League and the NBA, playing in 13 games for the Portland Trail Blazers. This off-season, Brown is the third Wake Forest guard to leave, following the transfers of Sharone Wright Jr. and Michael Wynn.

Brown missed eight games in 2019-20 due to lingering injuries. During a 69-65 win over Pittsburgh on January 4, Brown tore a calf muscle that kept him sidelined for the next seven games. In that span, Wake Forest went 1-6 with five of those losses coming by 10 points or less. When he was healthy, Brown was an integral part of the team’s biggest wins. On December 14 against No. 23 Xavier, Brown led the Deacons with 26 points (on 11-16 shooting) and six rebounds in an 80-78 victory. In the February 25 win against No. 7 Duke, Brown bullied Duke guard Cassius Stanley to the tune of 24 points and nine rebounds.

Brown, measuring in at 6’5” and 220 lbs., has good size and strength for a guard. He’s a crafty scorer and good rebounder but he lacks top-end speed and athleticism. Additionally, he’ll need to improve his long-range shooting (he shot just 32% from 3) to succeed in the increasingly perimeter-driven NBA.

As of publication, Brown has not appeared on any mock draft boards or predictions. With the ever-growing exodus of first-year players, NBA GM’s are more inclined to take a risk on an 18 or 19-year-old, than they are to choose a solid but known older player. Due to NCAA rule changes, if Brown is not selected in the Draft, he would be eligible to return and play another season with a college program.

Brown has announced that if he is not selected, he will be entering the transfer portal. As he has not graduated, under normal circumstances he would need to sit out a year before using his final year of eligibility. Due to the COVID-19 outbreak though, the NCAA has flirted with the idea of allowing first time transfers to be eligible immediately, especially if they move closer to home. It’s quite possible Brown could play immediately.

Brown’s good enough to be a contributor for most teams across the country, and he should receive interest from a number of high-profile schools, should he choose to transfer. At this point, Brown and Virginia Tech transfer Landers Nolley II are the best remaining potential transfers. Both of them play a similar position.

Needless to say, Brown’s departure from the program dampens what was already a bleak outlook on the 2020-21 season. Fellow junior Olivier Sarr could also potentially test the NBA draft waters — losing him would be disastrous.