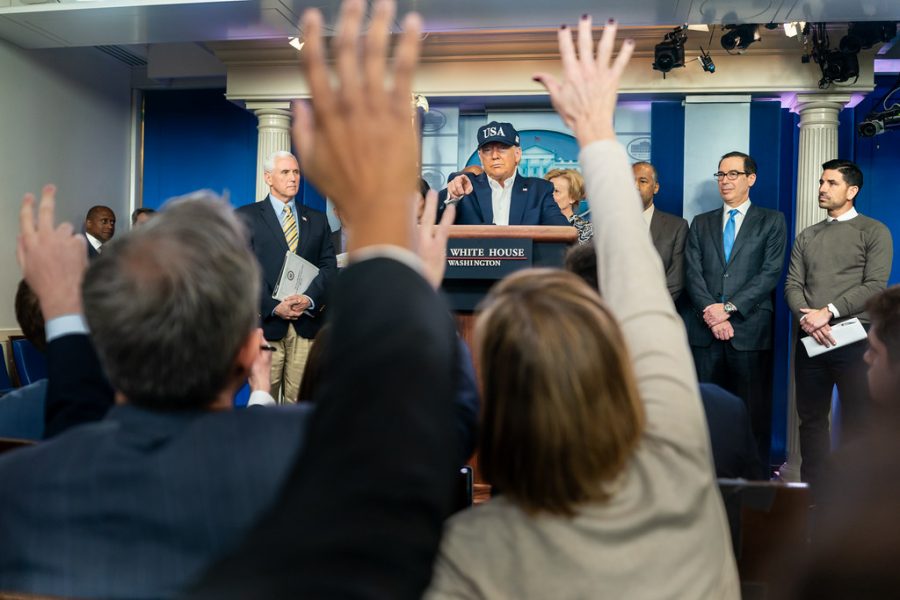 I doubt that the hysteria surrounding the novel coronavirus and its media coverage is the first time you’ve heard that President Donald Trump does not respect the press or take it seriously. It is no surprise that the president favors Fox News and absolutely despises the nicknamed “Fake News Network” CNN. His daily press briefings, however, make the American household a front-row seat for bad behavior and showcase a complete disregard for the Fourth Estate. Trump’s issue with the press is not only hurting the images of certain news networks and newspapers, but it also makes clear his lack of concern for accurate information to be released to the public.

Every day, Americans face a dilemma of life or death. I hope that Trump’s poor treatment of the press, only wanting certain information to be given to particular newsfeeds, shows that this president is not responsible or mature enough to handle the fate of citizens’ lives.

In high school, I used to be on the debate team. The morning of each debate, my mother would remind me that we, unfortunately, live in a world with the Real Housewives of Wherever and Jersey Shore. “Don’t fight like Theresa Giudice or Snooki,” she would remind me. In the realms of these reality TV shows, it seems like whoever yells the loudest is the winner of the argument and that thinking has unfortunately migrated from television to real life.

If I knew that that was not the proper way to negotiate as an 11th grader, one would think that a University of Pennsylvania Wharton School of Business alumnae would understand this too. In reality, Trump handles these press debates like he is trying to quiet down a fraternity party. He does not care that his decorum is harsh and inappropriate, but unlike desperate party guests looking for a good time, these reporters are trying to do their jobs and adequately inform a nation that will have close to one million coronavirus cases soon. Often, journalists will ask Trump serious questions regarding the reality of the healthcare system, its supplies, its resources and whether opening up the country is worth risking lives. However, he has shut them down completely because their rhetoric does not match his hyperbolic assurances.

The only way for there to be proper transparency in political systems is for there to be an equal opportunity to gather information for the public. Many presidents have not been happy with media coverage from the “other party” but Trump’s intolerance towards CNN, MSNBC and other left-leaning news sources is a different level of behavior.

For someone who brags when Congress passes bipartisan bills, he does not practice what he preaches in respecting a bipartisan pool of journalism. Not only is he discrediting his own “skills” forming bipartisan coalitions, but he is also further villainizing himself to the public. Ridiculing a CNN journalist, telling him that he “doesn’t have the brains he was born with” is not exactly equitable to traditional presidential decorum he should be displayed if he wants to win the next election.

In addition to these explicitly insulting statements, he often does not let reporters finish asking questions and talks over them if they point out that he completely avoided answering the question. If you are going to take the stride to call on a journalist from these “fake news network,” at least pretend that you are listening long enough for them to ask the question. There is no point in choosing to respond to journalists if you are going to put up an obstacle right after you do so.

It frightens me to think that some people are watching these press briefings and believing that Trump is displaying strength and perseverance. He may praise the healthcare system and essential workers and applaud his team, but he is expressing far more negative sentiments than positive (as he claims that it is his job to give the people hope).

These press briefings are not doing their job of informing American citizens. Instead, they are interviews with cherry picked answers that make Trump look better. The only glimmer of appropriate behavior comes from the medical professionals with firm statistics and realistic predictions that get to guest star occasionally each night. And, just like with the press that doesn’t paint him to be royalty, he contradicts or cuts off these experts often.

I hope that this crisis is educational for the United States and reminds us of how crucial an ideologically diverse press is. A nation needs a leader that acts like he has the fate of millions of people in his hands, not like he is fighting on a reality show.