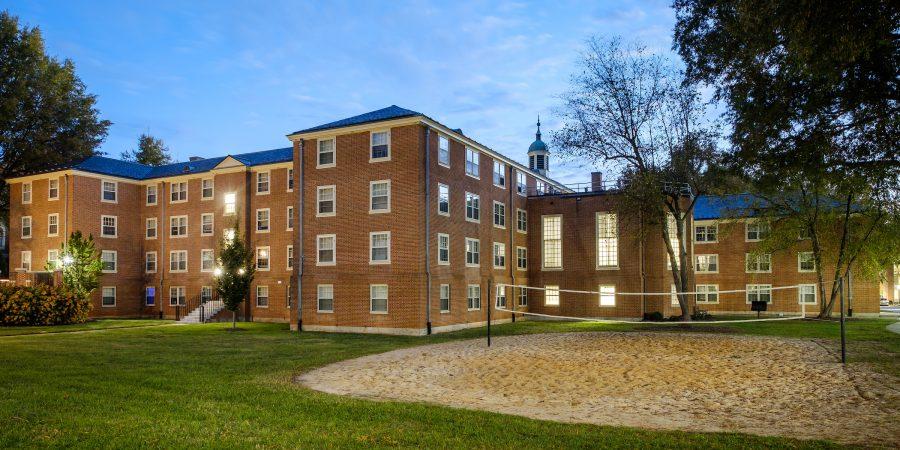 Johnson Residence Hall, on the campus of Wake Forest University on Thursday, November 2, 2017.

The decision to move forward with capital improvement plannings for Bostwick and Johnson was based on the need to improve the air handling systems, which would subsequently reduce health concerns arising from mold.

The work was scheduled to begin on May 9 in order to give the workers enough time to finish before the fall semester. However, the COVID-19 pandemic and Winston-Salem’s stay-at-home order have caused complications for the early start date, as students are currently prohibited from returning to campus in order to pack up their belongings.

“This landscape means that we cannot safely invite you to return to your rooms to pack your belongings, as would be our (and your) preference,” said Matt Clifford, the assistant vice president of Campus Life and dean of Residence Life and Housing, in the email. “So we are now faced with the difficult necessity of having to pack up your rooms and store your belongings.”

Additionally, the students who are currently residing in Bostwick and Johnson, who are not able to return home and could possibly stay on campus through the summer, are being moved into dorm rooms in Polo. In total, 24 rooms in that dorm will be packed up alongside the personal items from Bostwick and Johnson.

For the few whose Polo rooms were chosen to house students still on-campus, the inability to come and pack up their belongings can be frustrating. Junior Madeline Cox is just one student who expressed this, as she couldn’t understand why the university wouldn’t allow students to move out themselves. In an interview with the Old Gold & Black, Cox compared her situation to that of her sister, who attends Elon University. Her sister was notified that she could return to Elon’s campus at any time before May 31, in order to move her belongings out of her dorm room.

“It’s really annoying that she’s able to do that and I get an email from Wake [Forest] that tells me that my stuff has to be moved out by them,” Cox said. “She said they had the option of them [Elon] doing it, but they can go themselves, which we can’t do. She can literally go anytime.”

In fact, Elon is still allowing students to travel back before North Carolina’s stay-at-home order ends on April 29, leading Cox to question why Wake Forest wouldn’t make a special exception for students, too.

Although the university’s decision was made in accordance with updated public health guidelines, many students expressed frustration with the timing of the decision.

“It was frustrating that they announced this so last minute,” freshman Ahrianna Keefe said, who lived in Johnson Residence Hall. “It seems like they were prioritizing the convenience of the university rather than students who are already going through a stressful time.”

Continuing with the quick turnaround, the packing and moving of belongings will begin on April 22. Carolinas Office Relocation Experts (CORE) will begin moving students’ belongings out of the rooms in Bostwick, Johnson and Polo.

According to some students whose belongings are being moved, including Cox, there is a possibility that they might have to pay for the moving services. While this has not been announced by the university, hearing that this could occur exacerbated the frustration that they already felt at being unable to pack up their rooms themselves. Students who are choosing to have their belongings sent to them will have to pay for the shipping fees.

“I understand paying to have stuff shipped to us, but paying the company that [Wake Forest] decided on because they won’t delay the construction in Bostwick and Johnson is really annoying,” Cox said.

“Many out of state students don’t have the option to return to get their stuff so requiring students to pay the shipping fee seems unfair,” Keefe said.

CORE will pack all items left in desks, closets and drawers, items left hanging on the walls, bedding, loose items left on the floor, electronics like lamps and televisions and non-perishable items left in the kitchens, lounges and bathrooms. CORE will also try to label most items.

However, CORE will not pack alcohol or any items of an illegal nature, according to the email sent to students. If alcohol is found, the CORE team will discard it and students will be notified, but they will not be referred to the conduct process for having alcohol in their rooms. If illegal items, such as drugs or weapons, are found, then they will be transferred to the possession of University Police. Firearms or large quantities of illegal substances generally indicate the necessity of referring a student to the university’s conduct process.

Those affected by the move-out were asked to fill out a google form regarding packing information by Thursday, April 16. The form asks the students to identify belongings of value or personal significance, and to answer other questions regarding their belongings.

Even with the attempt to ask students for some input in the process, many complained that they were not given a lot of time to process the information and make a decision.

“Basically, they gave us like two days to fill out a form listing important belongings that were in the room,” said freshman Braden Strackman, who lived in Johnson.

Students with roommates in doubles or triples were also notified that a video call would be scheduled to assist in separating out personal belongings.

For more orderly roommates, figuring out which items belong to each person may be simple. Yet, for messier roommates, the process could become an infinitely more complex problem that cannot be easily resolved over a video call. Luckily for Strackman, the process was helpful, even though it felt rushed.

“I had technical difficulties on my end, but the call was helpful,” Strackman said. “The lady that called me went around the room and moved things on the counters and stuff, so it was clear whose was whose. I feel like the steps they took were fine, but it was just a little rushed.”

However, the movers did not take the same steps for everyone. Students moving out of Polo, where the suites are set up with four single rooms and shared common spaces, including the kitchen, living room and bathroom, were unable to schedule a video call to explain which items belong to each person in the suite.

“We all have our own separate stuff and they’re all in separate drawers and cabinets, and they’re not even going to take the time to do that,” Cox said. “For me, it’s kind of annoying, because I am moving into a house next year and not with any of the people I was living with in Polo, so the fact that all my kitchen stuff is just going to get put in with all of theirs is just a hassle.”

The issue of separating the items left in communal spaces could become even more problematic if items are shipped to the wrong student.

If the items aren’t shipped, the roommates will eventually be able to go through the packed items, which are stored in a secure, climate-controlled location on campus, and return each to its proper owner. However, it is uncertain when it will be safe for them to do so.

“We hope students will be able to return to campus to collect their belongings soon but we will be following public health guidance closely on that decision,” Clifford said. “The safety of our students and our campus remains paramount.”

The google form indicated that it might be late summer or even the fall semester before they would be able to return to collect their belongings.

Even though the packing decisions regarding the scheduled work may be a source of frustration, the university’s focus on the safety and wellbeing of students involves prioritizing this type of work.

The project planned for the residence halls during the summer involves using a central air system to filter more fresh air into the building. The dehumidification process will reverse the negative air pressure and decrease the likelihood that moisture will intrude into the building and cause the growth of mold spores.

“The air handling work is an important first step toward the type of systems modernization we completed in the residence halls on the [Upper] Quad recently, “ Clifford said. “This long-planned work was affirmed by the external consultants who inspected all south campus residence halls over winter break.”

Clifford explained that the decision to continue with this work was based on prioritizing the physical wellbeing of students, which has been emphasized in many of the university’s communications regarding difficult decisions during the coronavirus pandemic.

“The University approved a small portion of the project for this summer because it addresses student health and wellbeing,” Clifford said.