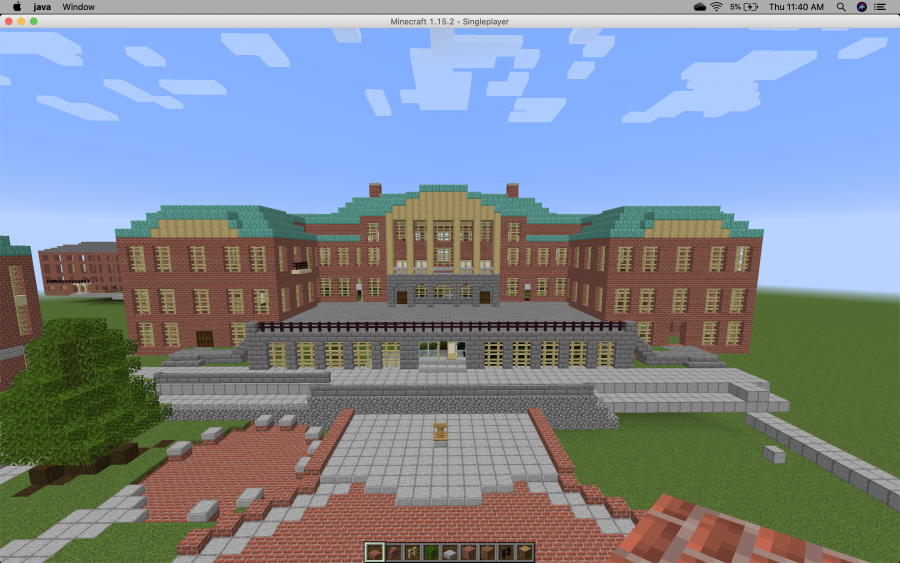 Having some extra free time on his hands thanks to remote learning and social distancing, Freshman Declan Sander has rediscovered his passion for building worlds on Minecraft. Recently, he built a virtual Minecraft replica of buildings on Wake Forest’s campus, which will be included in ZSR’s Special Collections and Archives, titled “Deacon Experiences: COVID-19.” After finishing Wake Forest’s campus, he plans to use his Minecraft skills to build other universities.

So, how did you get into building Wake Forest’s campus on Minecraft?

I’ve liked Minecraft since I was in sixth grade, like when I was 12 years old, and I kind of fell off as I got into high school. It was during that extended break period when I found out that we weren’t going back to campus, and I was just really bored. There was no work to do and there were no places to go. I had just got back from vacation with one of my friends at Wake [Forest] and all of the stores where I’m from were completely closed, so it seemed like something to do when I was confused where all of this was going. I would say that it’s not as bad for me as a senior, obviously, but it’s like I was really starting to like college at this point in my life. Like the first semester was sort of an adjustment period and the second semester was fantastic, and then it was cut short. So, I was sort of coming to terms with that adjustment, just being at home again and having it cut short — so I decided to do this.

Also, the only reason I can do this — I’m not a genius or whatever — is that Google Maps lets you calculate the distance between any two points by meters and you also know that a Minecraft [block] is one cubic meter, so anyone can model anything basically, as long as they have patience.

That makes sense. So, where did you begin with your Minecraft world?

I was sort of first building the upper quad, like grass and bricks, with my sister. And, then, the first building I did was Reynolda Hall, because the best way to judge if something looks good or not is the distance between buildings and Reynolda Hall is like a good central point zero that I was able to work with for like everything else. It started with Reynolda Hall, and it didn’t look horrible so I started building Davis, Benson and then [ZSR] library.

What was your favorite part to build?

Honestly, Davis because there’s a challenge with every other building that’s not a residence. There’s no publicly available resource for interiors of buildings, like you can’t see what the president’s office looks like — that would be kind of weird. The Res life has a bunch of plans for every residence hall. So, building Davis, I was able to make the outside nice, but also the inside. I could make it look one-to-one and you also know which ones are singles, doubles, staff buildings, etcetera. It was really, really cool for me to be able to build like literally every facet of a place at Wake [Forest].

How long have you spent on this, and how much more do you have to go?

I started up during that extended spring break period, like at the end of that week. I’ve been going ever since, and I think this thing is going to be going on for probably four months.

Is there anything that’s been particularly challenging or interesting about building this?

There’s sort of some stuff that I’ve had to mentally come to terms with, like what the scale or space is. This is like an archive to show what Wake Forest looked like during this time, but it’s also to show what the creative mind was during a global pandemic. That mindset has sort of shifted from like doing something completely accurate and one to one, where things can look very blocky and ugly, to sort of a way to showcase Wake [Forest] in a way that’s true in my mind. Things may not be the most mathematically accurate, but it conveys a feeling of appreciation for the college and for the people involved, like my friends and stuff like that. So, I don’t know, that’s been the most interesting part for me about it. It’s like shifting my mindset from one of replication to one of rendition and creation.

What do you feel like you’ve learned from this experience or even during the coronavirus pandemic?

I have learned that it’s not that hard to build universities on Minecraft and I’m probably going to keep doing that. That’s like a basic thing.

But, I don’t know, I’m really bad at stress generally, like I’m a little too good at handling it and just like keeping it held in. And this has been one of the first times that I’ve used some kind of stress decompression as a way of feeling better about the situation. I think that experience has been really helpful for me personally — not that it was like an intentional thing, but it’s something that I’ve observed.

So, you mentioned that you’re going to keep doing this. Are there other universities that you plan to build, or where do you think that you’ll go next?

Yeah, so the two other universities that I want to build next are probably Brown University, Rhode Island [College] and Warren Wilson College in Swannanoa, North Carolina.

Awesome. Is there anything else that you’d like me to know?

I promised I’d give my sister [Eliza Sander] credit. My sister’s helped me with a [large] amount of this project. I’m really glad to have this time spent with her and also to have her help in completing this thing.