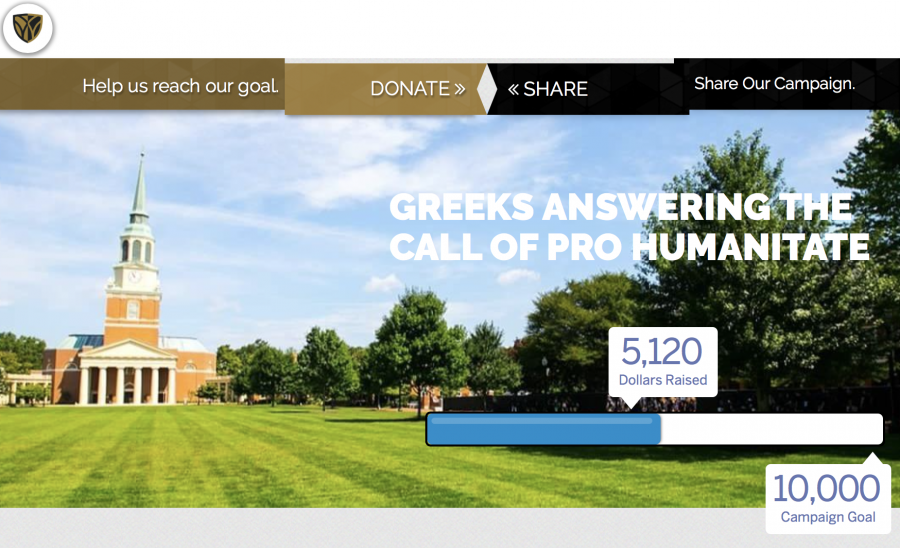 Demonstrating the spirit of Pro Humanitate in the midst of a pandemic, the Interfraternity Council (IFC) established the Greeks Answering the Call of Pro Humanitate Fund to collect donations for COVID-19 response from members of the university’s Greek community.

The idea for the fund began when sophomore Rory Britt, the vice president of programming for IFC, and sophomore Nate Seegel, the president of IFC, saw an opportunity to garner greater financial support for the Wake Forest Crisis Response Fund from members of IFC chapters after they saw other organizations like Student Government making significant contributions.

“We saw a lot of disparate organizations and people donating money to it, and we thought, well, you know, if there’s some way to organize this, that would be phenomenal,” Britt said.

Thus, IFC decided to partner with the Wake Forest Crisis Response Fund with University Advancement, while working closely with Blake Absher, the assistant vice president of the Wake Forest Fund.

Now, when students go to the university’s crowdfund page established for the Wake Forest Crisis Response Fund, they have an option to make a donation in the name of their fraternity or sorority.

“We are expecting to receive 100% support from IFC Organizations and are hoping we can expand this to 100% Greek Life participation,” Seegel said.

In this way, the fund encourages students who are members in one of the university’s chapters of IFC, Panhellenic Council or National Pan-Hellenic Council (NPHC) to give back to the university and to fellow students by contributing money toward COVID-19 response. The partnership with other chapters, including Panhellenic, has demonstrated unity among the Greek community during a time of physical distancing and increased the impact of the fund.

“The collaboration between all three councils is amazing,” said junior Victoria Parker, the president of Panhellenic Council. “IFC organizing and matching donations from the entire Greek community (IFC, NPC and NPHC) demonstrates how dedicated the Greek community is to Wake [Forest]’s campus and students as a whole.”

As a result, over $5,000 has been raised since the fund was launched less than a week ago, which is a testimonial to the power of the Greek community’s support for the university during this difficult time.

Already, 70% of IFC chapters have participated, with Kappa Alpha Order contributing a grand amount of $1,000 to the fund. Panhellenic has also shown an outstanding level of support, with Chi Omega giving $500 in donations.

“It’s just amazing to see the Greek community come together like this on such short notice and raise the kind of money that we are to really give back to students of all walks of life at Wake [Forest],” Britt said.

Donations to the Greeks Answering the Call of Pro Humanitate Fund can be made here.