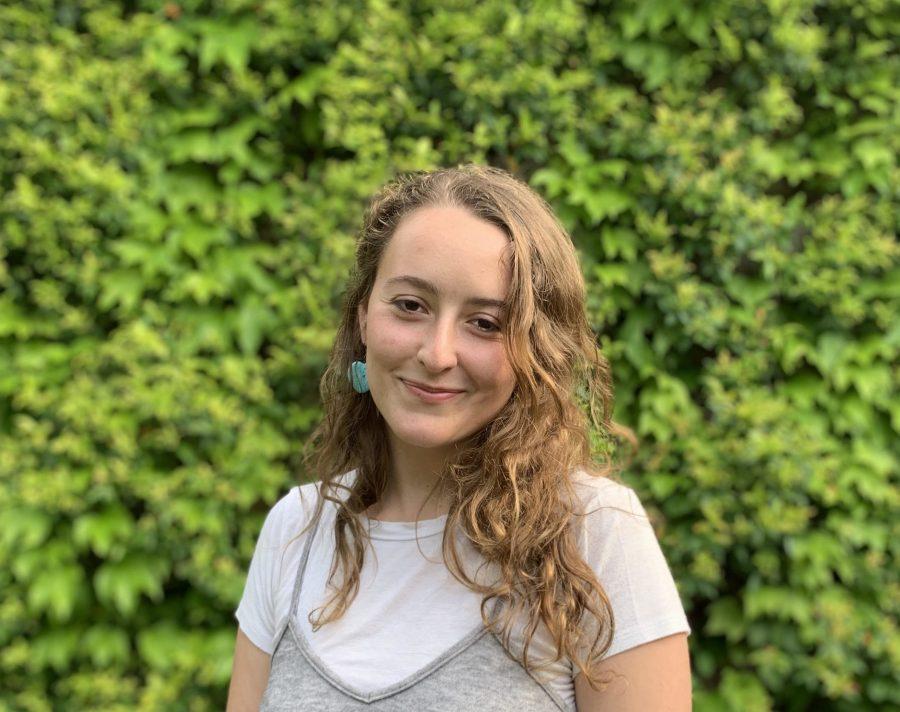 Senior Livi Andreini entered college thinking she would study politics, maybe become a lobbyist or possibly get involved in government. That all changed when she felt the “spark.” Or rather, when she took an introductory art history course with Professor Morna O’Neill her freshman year. That semester, Andreini learned that art, something that brought her so much joy, could in fact be the passion that fuels her life path.

“That class taught me to have this view of objects that carried so much importance to so many people through time. I mean, art is really this vehicle of cultural heritage,” Andreini said. “It’s not what anyone says it is, it’s not what anyone has made up, it’s a real object that has existed through time and meant something to people.”

Throughout her course as an art history major, Andreini has taken advantage of all the department has to offer. Sophomore year, she took Management in the Visual Arts and traveled to New York City to learn more about the art world.

“I have had the pleasure to teach [Andreini] in three classes, and I had the opportunity to travel with her during a class study tour to New York, where I witnessed first-hand her maturity, her passion for art and her ability to bring people together from different social groups,” O’Neill said. “She is a delight to have in class, as she views the classroom as a place to think and to connect.”

Junior year, Andreini made her way to Italy for the Venice Biennale, a world-renowned art festival, and stayed in Casa Artom for two weeks with fellow students. She has also had the chance to travel to Paris to learn about the French art scene and, for the past three years, has been a URECA research fellow for Professor David Lubin.

“As a URECA fellow last summer, Livi worked with me on a study of the abstract artist Jackson Pollock and his times,” Lubin said. “I guided her research, and she in turn helped me organize mine. Our mentor/mentee relationship was rewarding to both of us — and a lot of fun, too.”

On top of this, Andreini has curated two collections in the START Gallery and Benson University Center. During our interview, she enthusiastically recounted getting to work closely with Picasso’s, a Keith Haring and work by Elaine de Kooning — “We got to touch them, it was unreal.” She also completed an internship with the Collections Department at the Reynolda House of American Art.

The energy that exudes from Andreini doesn’t end with her interest in art history, but rather continues when she describes her other endeavors at Wake Forest. After trying on multiple different hats on campus, including club lacrosse and even starting her own organization, Andreini has since focused in on a few activities. Beginning sophomore year, she became involved with TedXWakeForestU and eventually spearheaded the 2020 event as Director. Andreini is also an active member of the Kappa Delta sorority.

“You know, I never thought that [KD] was going to be a super integral part of my experience,” Andreini said. “But when I decided to just stop thinking I was cooler than it all, I realized it was just this network of badass women that just love and want to laugh together.”

When asked about her favorite Wake Forest experience, Andreini thought back to freshman year convocation. During this event, first year students write a letter to themselves that they are supposed to read at the end of senior year.

“I remember that whole week just looking around campus in total awe. I mean, awe at the people I was meeting, the upperclassmen I was meeting and everything they’ve done and how beautiful campus was,” Andreini said. “I just wrote to myself that I hoped I would not let a day pass where I didn’t realize how beautiful that place was. You know, I’m sure I did, but I remembered that moment so often to the point where little things became so beautiful, you know? Because I realized that it’s all just weaving into this crazy experience.”

Two weeks ago, Andreini defended her thesis and recently learned that she passed with honors.

“I had this rush and just [felt] so grateful and genuinely excited for whatever is next,” Andreini said. “I just know that I feel equipped going forward.”

After graduation, Andreini plans on working towards a graduate degree in art conservation.

“Livi is not only bright, creative and articulate, but she’s also poised, funny and outgoing. She radiates warmth and energy,” Lubin said. “We in the art department were unanimous in selecting her for this recognition in the Old Gold & Black.”