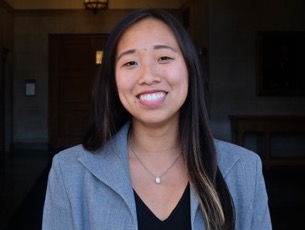 Celia Zhou is a senior from Cary, N.C. She is a Biochemistry and Molecular Biology major – a field of study that she described as challenging yet rewarding.

“I wanted to understand on a more molecular level the path of physiology behind a lot of different diseases,” she said. “I thought that would be a major that offered me the greatest fundamental coursework that allowed me to do that.”

To anyone thinking about the biochem major, Zhou said: “Be prepared to do good and hard work, but also be ready to explore fields that tie into the subject area – like public health and global health.”

While many students only spend one semester abroad, Zhou spent her entire junior year studying at Oxford University where she studied both policy and science.

Zhou said that spending a year at Oxford not only pushed her academically but socially as well.

“Some of the people who are literally changing the world are there, so that gave me the ambition and a renewed focus on why I was there studying what I wanted to study,” she said. “Also, there is so much social growth involved with new exposure, and it really exposed me to a side of the world that I never knew existed.”

“Here at a liberal arts college I took so many different classes which exposed me to the breadth of the subject fields in the world,” she said. “Whereas at Oxford I took a deep dive into one subject field which gave me a different perspective of an academic curriculum lense. “

In addition to her year at Oxford, Zhou also traveled to the Netherlands and Sri Lanka to conduct independent research.

“Zhou is the model student: intellectually intrepid, auto-didactic, thoughtful about the quality of her education (however quantitative). She designed her own major and completed it brilliantly,” said Tom Phillips, Zhou’s scholarship advisor.

In between her academic rigor and extensive abroad opportunities, Zhou is a member of the women’s club volleyball team on campus as well as a President’s Aide. For Zhou, these experiences have been a great opportunity to connect with different members of the Wake Forest community.

Zhou also participated in “Take the Fight,” which is a non-profit organization that operates within Wake Forest Baptist’s Comprehensive Medical Center. Through this program, Zhou acted as a volunteer liaison between cancer patients and doctors, in hopes of making treatments more efficient while also providing emotional support for the patients.

“Wake [Forest] has not only given me academic coursework, but also monetary grants to be able to conduct research on three different continents,” she said.

Zhou has done research at Wake Forest Baptist Medical Center, in Amsterdam through a Richter Scholarship, in Sri Lanka for a summer and in her time at Oxford. Zhou said that encouragement from her professors is what gave her the drive to go and achieve her goals.

“Be bold and ambitious, but also be patient about what you want to achieve,” said Zhou when asked about advice she would give to an incoming student. “Wake [Forest] has all of the resources that anyone needs to excel in any sort of field so don’t be afraid to ask questions.”

As a student and member of the community, Zhou has made a positive impact on those she interacted with in her four years here at Wake Forest.

“[Celia] is as considerate as she is committed.  She has a bright future in health policy, research, or practice.  All who have taught her and engaged with her are very proud of her and excited for her future,” Phillips said.

Zhou expressed that the most difficult part of being away from campus during the pandemic is missing the community.

“That is Wake Forest. The people– friends I will have for the rest of my life,” she said. “But at the same time Wake [Forest] has prepared me to move on to the next chapter in my life, and I’m looking forward to moving on to what I’ve been prepared and challenged to do in the world when things finally move back to normal, while also knowing I will always have a home here.”

Upon graduation, Zhou will be working for Boston Consulting group at their Atlanta location where she will be doing medical consulting.