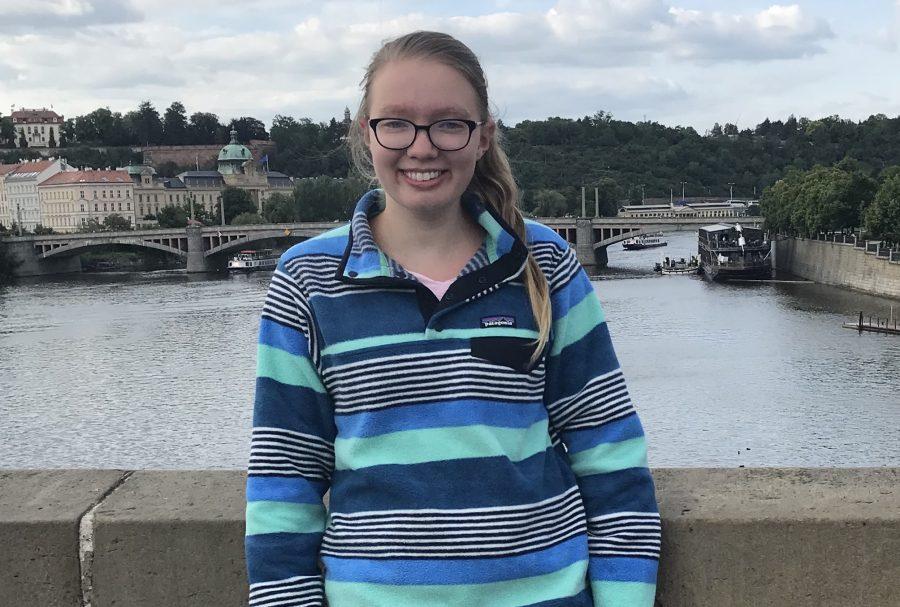 “Like Willie Mays was to baseball, so Amanda is to the study of economics.”

And while Wilcox wouldn’t necessarily know who Willie Mays is or how many RBIs he has — she’s not the biggest sports fan — she could easily recall the exact interest rates during Janet Yellen’s tenure as chair of the Federal Reserve.

But had you told Wilcox’s high-school self that she would be majoring in economics, she probably would’ve just shrugged it off. Her dad being an economist, her self-described “teenage rebellion” was her resistance to the idea of following in his footsteps. It wasn’t until she took AP Economics with an amazing teacher that she was “completely bitten with the bug.”

Wilcox’s college self concedes it’s sappy and cliche, but she feels like economics chose her.

“I never even considered for a second majoring in anything else once I got to Wake Forest,” Wilcox said.

While at Wake Forest, Wilcox dedicated herself to the study of economics. If you ever passed her in the atrium of the Z. Smith Reynolds Library (ZSR), she would always be in deep focus, with statistical programs, like R or Stata, open on her computer. And last semester, she devoted each Monday, when she didn’t have any class, to solely working on her honors thesis.

For her thesis, Wilcox studied the impact of the China shock  — which occurred when China joined the World Trade Organization in 2001 and exports from China increased about an unprecedented 300% in a matter of years  — on air pollution emissions in the United States.

Outside of academics, Wilcox was a President’s Aide, a member of club swimming and on staff at the Old Gold & Black, where she held the executive position of online managing editor.

While at the OGB, Wilcox wrote many insightful op-eds discussing her two favorite topics, economics and politics. This ability to cogently make an argument or observation not only caught the eye of the readers of the OGB but also of her professors.

“The [skill] that stands out is her ability to communicate ideas, which she did so expertly in commentary pieces in the OGB,” said McFall, who also was an avid reader of her weekly op-eds. “These pieces, which are intensely difficult to write, showed her ability to reach large audiences while discussing technical matters (and also showed her desire to live in a more egalitarian society).”

Wilcox even incorporated economics into her extracurriculars, serving as a teaching assistant and joining the university’s College Fed Challenge team.

The College Fed Challenge team spends a year pretending they are the Federal Open Market Committee, the policymaking arm of the Federal Reserve, discussing the current state of the economy and making a monetary policy recommendation, she said.

“It’s a lot of fun to spend an entire year preparing for this one thing and studying the economy and debating things with our peers,” Wilcox said.

For Wilcox, one of the most rewarding experiences was her three semesters as a teaching assistant for econometrics classes. For two of those semesters, she worked for professor Amanda Griffith, who spoke highly of Wilcox, especially this semester.

“Her passion for economics shines through when she helps students in my classes,” Griffith said. “She truly wants them all to succeed and to love economics as much as she does. This has never been more evident than during the last two months.”

“Despite also adjusting to the changes in her own life and classes due to COVID-19, Amanda has been an amazing source of help and a calming presence for my econometrics students,” Griffith continued. “I have no doubt that Amanda has played an integral role in many students’ success this semester.”

Wilcox shows this personal dedication to everyone she meets — and I am fortunate enough to know this firsthand. She and I met our freshman year on the Old Gold & Black, and she quickly grew to be one of my best friends. Wilcox had already been on staff for a semester, and I, being new and shy, looked forward to her friendly face each week (and even texted her before production to ensure she would be there). She helped me with a paper on Ruth Bader Ginsburg that semester in a class I was struggling with. From then on, we were practically inseparable.

Already knowing her stories, or even being involved in many of them, I was curious to know if Wilcox had a favorite college experience.

“It’s hard to point to one big thing,” she said. “There were lots and lots of little things, like our weekly dinners with Jamie in the Pit before my TA office hours, our crazy shenanigans with the OGB staff at three in the morning, my swims in the early morning with my friend Avery.”

And for me, it was heart-warming to hear that she is never going to forget those little things.

“I think the thing that I will take away the most is friendships that I will have for the rest of my life, like with you, with Jamie and with James,” she told me. “Things like that are what make Wake Forest special.”